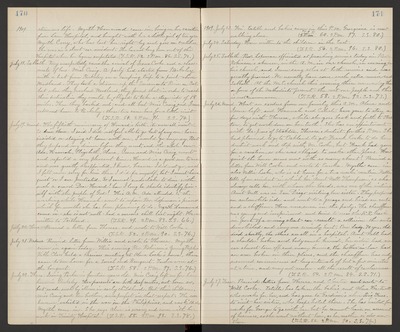 1909. strenuous life. Myrtle Hammond came in, being on her vacation from Lane Hospital, and bought with her a little girl of ten yrs. Myrtle Corry, who has lost her right leg and goes on crutches. She was in a street-car accident. She has not long been out of the Hospital where her leg was amputated. (T.S.R. 52. 2 P.M. 86. S.S. 72.)

July 18. Sabbath. Very unexpectedly come the arrival of Irene Cooke and a classmate of hers - Miss Craig. A party had started from Berkeley with a tent from Berkeley on a camping trip to a point above Woodland. They took a steamer up the Sacramento River on Sat. but when they reached Woodland, they found that in order to reach their destination they would be obliged to take a stage ride of 18 miles. Then they "backed out" - and all but Miss Craig and Irene returned home to Berkeley - those two came here for a little visit. (T.S.R. 54. 2 P.M. 91. S.S. 74.)

July 19. Mond. The fiftieth anniversary of Howard's birth. We were invited to dine there. I said I did not feel able to go but if anyone here insisted on staying at home with me, I would go anyway. But they prepared my dinner before they went, and the whole crowd - Ada, Hannah, Elizabeth, Alma, Irene and Miss Craig went and reported a very pleasant time. Howard is a good son to me and was greatly disappointed, I know, because I did not go, and I felt more sorry for him than I did for myself, but I must have quiet or I am prostrated. So I cannot undertake to dine with such a crowd. Dear Howard! how I long he should identify himself with the people of God! This A.M. Ada attended to the washing, while Hannah went to repair Rev. Lopeman's piano which for months she has been planning to do. Myrtle Hammond came in - she is not well - had a nervous chill last night. Have written to Portland. (T.S.R. 49. 2 P.M. 83. S.S. 66.)

July 21. Wednes. Received letter from Willie and wrote to Theresa. Myrtle came in again today. This evening Rev. Robinson's Young People's Bible Class held a business meeting at Alma Locke's house, then came to our Lawn for a Social and Banquet. Twelve were at the banquet. (T.S.R. 58. 2 P.M. 97. S.S. 76.)

July 22. Thurs. Irving Parker is fourteen years old. Miss Craig left us for her home in Berkeley. Her parents are both deaf mutes, not born so, but made such by illness in early childhood. But their children, Miss Craig and her brother, were perfect in that respect. The son however, enlisted in the war in the Philippines, and was killed, Myrtle came in. She says Alice is weary and worn with her work in Trinity Hospital. (T.S.R. 55. 2 P.M. 93. S.S. 78.)

July 25. Sabbath. Rev. Lopeman officiated at preaching services today in Rev. Robinson's absence, in the A.M. in our church, in evening in his church, and Irene sang solos at both services and was greatly praised. We usually have some such extra music each Sabbath. At the M.E. church this evening there were only three or four of the Methodist present - the rest our people and this is not uncommon. (T.S.R. 58. 2 P.M. 92. S.S. 73.)

July 26. Mond. What an exodus from our family this A.M. Alma and Irene left, and Hannah and Celeste have gone to stay a few days with Theresa, while she goes back and forth to Stockton, to get work done on her teeth. She has an appointment with Dr. Jones of Stockton, Theresa's dentist, for this P.M. She had planned to go to Oakland to get Frank Locke to do her dentist work and stop with Mr. Cooke, but Frank had gone for a vacation, so she was obliged to make other plans. How quiet the house seems now with so many absent! Received a letter from Will Cooke and wrote to Eureka. Myrtle came in also Nellie Locke, who is at home for a two-weeks' vacation. Nellie tells an accident in which her "Aunt Nell Thompson", as she always call her, with whom she boards, was one of the victims. Aunt Nell was in San Diego visiting her sister. They proposed an automobile ride and went to a garage and hired an auto and a chauffeur. There were seven in the party. The chauffeur was young and inexperienced and tried to cross the R.R. track in front of a moving street-car - result - a collision - the auto demolished and every one seriously hurt. One lady, 70 yrs. old died shortly, the others are all in a hospital. Aunt Nell had a shoulder broken and body much bruised, her sister had an ear almost torn off and many bruises, the brother-in-law had an arm broken in the places, and the chauffeur has only recovered consciousness at long intervals of but a few minutes at a time. and may not recover - all the result of carelessness. (T.S.R. 54. 2 P.M. 84. S.S. 71.)

July 27. Tues. Received letters from Theresa and Chester and wrote to Will Cooke. Estelle has taken the babies and Alma Hartwell who works for her, and has gone to Gardiner's above Big Trees, to visit her sister, who keeps hotel there. She has waited for works for George to go with her, but he cannot leave on account of business, so she went without him, as her mother is also now there. (T.S.R. 56. 2 P.M. 90. S.S. 76.)