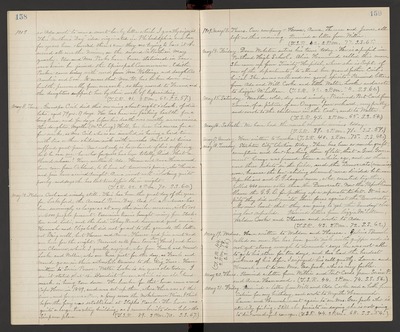 1909. so Ada wrote to me a most lovely letter which I greatly enjoyed. This "Mother's Day" idea originated in Philadelphia and has for years been observed there: Now they are trying to have it observed all over the Union, on the second Sabbath in May yearly - Rev. and Mrs. Perks have been stationed in Sac. ever since he joined the Episcopal Communion. Edith Parker came today with word from Mrs. Billings and daughters Amelia and Eva - It seems that Mrs. B. has broken down in health, presumably from overwork, so they moved to Fresno, and the daughters support her by their work of tupewriting. (T.S.R. 41. 2 P.M. 62. S.S. 57.)

May 11. Tues. Grandpa Coil died this morning about eight o'clock, of diabetes, aged 79 yrs. 17 days. He has been in failing health for a long time, and for days before his death was mostly unconscious. His daughter, Myrtle (McClung) Hill, has been his nurse for a few weeks, as Mrs. Coil, who is an invalid, is having a hard time with two or three children sick with measles. Mr. Coil at times suffered great pain. Now not only is he relieved of his suffering, but he can see - he who for years has been totally blind. What a blessed release! Have written to Ada. Horace and Anna Hammond have came from Oakland, to be here at tomorrow's picnic, also Theresa and Jim have arrived tonight. Anna is not well - is looking quite poorly, and says she has lost twentyfive lbs. in weight. (T.S.R. 42. 2 P.M. 70. S.S. 60.)

May 12. Wednes. Cool and windy still. This has been the great day of the year for Lockeford, the Annual Picnic Day. And the attendance has been, seemingly as large as at any other similar occasion, with 5000 or 6000 people present. Excursion trains brought many from Stockton and Lodi, and the Lodi Tokay Band discoursed good music. Hannah and Elizabeth did not go out to the grounds, the latter not being well, but Horace and Anna, Theresa and Jim went and are here for the night. Received calls from Emma Ken (Hurd) and her son Clarence, which I greatly enjoyed, also from Frank and Mande Locke and Nellie, who are here just for the day, as Frank and Mande go on in their automobile tomorrow to the Big Trees. Have written to Susie Pascoe. Walter Locke is six years old today. I see it stated that the Benedict house, which is an old landmark, is being torn down. The lumber for that house came around Cape Horn in 1849, and was set up there, where there was at that time, and for years after, a ferry across the Mokelumne River, I think be for the ferry was established at Staples Ranch. The house was quite a large, two story building, as I remember it, down below the Simpson place. (T.S.R. 39. 2 P.M. 70. S.S. 67.)

May 14. Friday. Dean Webster enters his "teens" today. He is a pupil in Portland High School. Alice Hammond called this morn. She came up from Trinity Hospital, where she is Supt. of one of the departments, to attend grandfather Coil's burial. She seems well and in good spirits. Received letters from Ada and Will Cooke and little Walter Locke and wrote to Lizzie McLellan. (T.S.R. 46. 2 P.M. 74. S.S. 60.)

May 18. Tuesday. Stockton City Election today. There has been so much graft, corruption and law-breaking there of late, that a Good Government Leauge was formed there a while ago, and so there were three tickets in the field, and the Democrats (Rummies) won, because the law-abiding element were divide between Republicans and G.G. League men, who, counted together, polled 440 more votes than the Democrats. Now the Republicans blame the G.G.L. for putting up a separate ticket. It is a pity they did not unite their forces against the Democrats, who now boast that they are going to get the Sunday closing law repealed. Received letters from Lizzie McLellan, Weldon Cooke and Theresa and wrote to Ada. (T.S.R. 43. 2 P.M. 72. S.S. 62.)

May 19. Wednes. Have written to Weldon and Theresa - Julius Bruml called on me. He has been quite sick with gripped and is not yet strong enough to do much - says he was not able to go to his store for ten days, and has had the hardest sickness of his life. I enjoyed his call greatly. Laura and Hannah went to see Mrs. Geo Jack, who is very feeble. (T.S.R. 44. 2 P.M. 78. S.S. 63.)

May 21. Friday. Received a letter from Will and Ada Cooke and a book from Calvin for my birthday, and wrote to Myrtle Hammond. Laura and Hannah went again to see Mrs. Geo. Jack who is steadily failing. Still she persists in saying she is not going to die - wonderful courage. (T.S.R. 44. 2 P.M. 68. S.S. 54.)