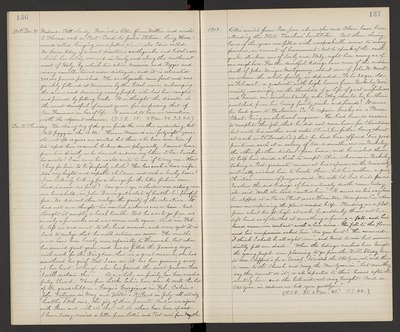 1908. Dec. 30. Wednes. Still cloudy. Received a letter from Willie and wrote to Theresa and a Post-Card to Julia Stetson. Lucy Hammond called, bringing me a potted plant, also Edna called. We learn today of a most-disastrous earthquake and tidal wave which has lately occurred in Sicily and along the southwest coast of Italy, by which two cities, Messina and Reggio and many smaller towns were destroyed, and it is estimated 200,000 persons perished. The earthquake came first and was quickly followed at Messina by the tidal wave, submerging the ruins, and drowning many people who had been caught and pinned by falling walls. It is thought the disaster is the most dreadful of recent years, far surpassing that of San Francisco in loss of life. It seemed to have no connection with the adjacent volcanoes. (T.S.R. 35. 2 P.M. 42. S.S. 40.)

Dec. 31. Thursday. The closing day of the year finds the weather moderating, but still foggy in the A.M. Horace Mann is now fortyeight years old, not old as years are counted but those who have seen him of late report him as much broken down physically. I cannot hear from him directly as he does not answer my letters - O how I wish he would! I am sure he would write to me if to anyone. How I long for him to be "perfectly whole"! He has such a dear wife, two very bright and capable children and such a lovely home! I am certainly looking for a change for the better for him soon. "Lord, increase our faith"! One year ago a shadow was resting over our household, in John Demangeot's state of health - his painful face. We did not then realize the gravity of the situation. We had not even thought his mortal sickness was on him, but though it simply a local trouble. But he was to go from us in only a few weeks and was never well again. And in Feb. he left us and went to the land unseen, and even yet it is hard to realize that he will return no more. The months since have been lonely ones, especially to Hannah, but she has received great grace, and has so filled the passing days with work for the Kingdom, that in a great measure, she has smothered her grief. But I can see it has been gnawing away at her heart, although she has proved the sweet promise true - "I will sustain thee". As a whole, our family has been wonder fully blessed. Three fine Locke babies have come to swell the list of the grand children - George's Georgiana in Feb., Calvin's John Fillmore in May and Willie's Willard in July - all sturdy healthy little ones, the joy of their parents. And so we rejoice with them and with all that all the others have been spared. I have today received a letter from Lottie and Post-card from Myrtle.

1908. Lottie writes from San Jose where she and Alma have been attending the State Teacher's Institute. But these closing hours of the year are filled with unspeakable sorrow to many families, on account of bereavement. Not to speak of the earthquake stricken ones of Sicily and Italy, right here among us of our neighbors. For the dreadful tidings have come of the sudden death of John Minges Montgomery, eldest son of John W. Mont. - on whom the whole family so depended. To be 24 yrs. old in Feb. next, a graduate with high honors from Berkeley University, seemingly on the threshold of a life of great usefulness and honor, one involuntarily asks, "Why should he be thus snatched from his loving family circle and friends"? It seems he had gone to Tuolumne Co. to repair breaks in a Power Plant, being an electrical engineer. He had been so anxious to complete the job, that he did not come home for Christmas but wrote his mother and sister Olive (his father being absent at work in El Dorado Co.) that he had been offered two good positions, each at a salary of $500. a month, one in Berkeley, the other farther distant from home, and he wished them to help him decide which to accept. Olive, who was in Berkeley taking a Post-graduate course at his expense in the University naturally wished him to locate there, but his mother, a good Christian woman of prayer, said, "We will let God decide for us". So when the sad tidings of his untimely death came today she said, "Well, the Lord wanted him". It seems on his way home he stopped at a Power Plant near Hornitos, Mariposa Co. where someone repairing the plant needed help. Standing on a platform about ten ft. high at work, he suddenly threw out his left hand as if started at something or fearing a fall, and his hand came in contact with a live wire. He fell to the floor and his companion asked him "Are you hurt"? He answered, "I think I shall be all right soon", and tried to rise but immediately fell over dead. When the tidings reached here tonight the young people were planning to go from the Bible Study here to Mrs. Clifford's for a Social, to "watch the Old Year out", and then to come to the Church and "ring the New Year in", but now they say they cannot do it, so all departed to their homes after the meeting here and the bell will not ring tonight. And so, Old Year, in sadness we bid you goodbye! (T.S.R. 35. 2 P.M. 45. S.S. 44.)