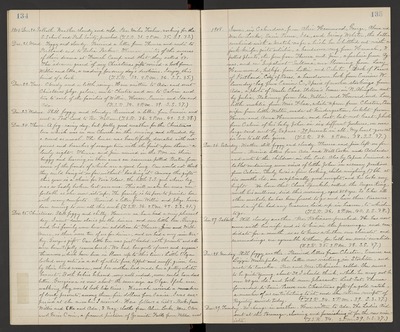 Dec. 21. Mond. Foggy and cloudy. Received a letter from Theresa and wrote to Portland and to Delia Parker. Theresa writes of the success of their drama and French Camp and that they netted $50. The "advanced guard" of my Christmas gifts arrived - a book from Willie and Etta, and reading for every day's devotions. I enjoy this kind of a book. (T.S.R. 32. 2 P.M. 36. S.S. 35.)

Dec. 24. Thurs. A fog - rainy day, but pretty good weather for the Christmas tree which was in our Church in the evening and attended by a crowd as usual. The house was beautifully decorated with evergreens and branches of orange trees with the fruit upon them - a lovely sight. Theresa and Jim arrived in the P.M. in their buggy and bearing in their arms and immense potted Boston fern some of the fronds of which are a yard long. One would not think they could bring it so far without breaking it. Among the gifts this year is a chair for Vira Votaw, the little S.S. girl whose leg was so badly broken last summer. this will make her more comfortable as she now sits up. The family is too poor to provide her with many comforts. Received a letter from Willie and pkgs. have been coming to me all this week. (T.S.R. 36. 2 P.M. 42. S.S. 41.)

Dec. 25. Christmas. Still foggy and chilly. However we have had a very pleasant day. I went down stairs for the dinner and our little tree. George and his family were here in addition to Theresa, Jim and Will Moore, so there were ten of us for dinner, and we had a very nice turkey, George's gift. Our little tree was just loaded with presents and all were bountifully remembered. We had bouquets of roses and chrysanthemums which have been in bloom up to this time. Little Olga looked very cute in a set of white furs, tippet and muff, given her by their hired woman, and her mother had made her a pretty white bonnet. Both babies behaved very well indeed, none could have done better. Georgiana is now about the same size as Olga. If she were walking they would like twins. Hannah received a number of lovely presents, among them five dollars from Eunice. I was surprised at the number I received. here follows a lists: - Books from Willie and Etta and Ada, 3 tray - cloths from Alice Locke, Mrs. Ober and Miss Cain, a framed picture of Yosemite Falls from Weldon and

1908. Irene, six Calendars, from Alice Hammond, George, Alma and Merle Locke, Susie Pascoe, Ida, and Irving Webster, the latter combined with a Match-safe which he whittled out with a jack-knife, quite artistic, a handsome rug from Hannah, 3 potted plants, the fern from Theresa and Jim, a fuchsia from Agnes, and an "Impatient Sultana", ever blooming from Lucy Hammond, hdkfs. from Lottie and Celeste, Book of Views of Portland, "City of Roses", a handsome book from Eunice W. laundry-bag from Eunice C., 3 pairs of woolen stockings from Ada, a photo of Uncle Chas. Stetson's house in N, Abington sent by Julia, Stationery from Ida, Nellie, and Howard and Lou, little necktie form Miss Flaa, white apron from Chester, Pen wiper from little Walter, made a kindergarten, booklet from Horace and Anna Hammond, and last, but not least, photo from Calvin of his baby John in six different postures, on one large card sent by Express - 30 presents in all. My heart goes out in love to all the givers. (T.S.R. 34. 2 P.M. 38. S.S. 37.)

Dec. 26. Saturday. Weather still foggy and cloudy. Theresa and Jim left us for home. Received letters from Ada and will Cooke and Adelaide and wrote to the children in the East. Also by Express I received a tablet containing seven views of little John in as many positions from Calvin. Truly he is a fine looking child weighing 17 lbs. at six months old, an exceptionally good weight, and he looks very bright. We learn that Claus Spuckels, called the Sugar King, worth his millions, died this morning, aged 80+ yrs. So like all other mortals, he has been forced to go and leave these treasures - wonder if he had any treasures laid up in haven, to which to go. (T.S.R. 36. 2 P.M. 40. S.S. 38.)

Dec. 27. Sabbath Still cloudy weather. Rev. Robinson preached. he has now come with his wife and is to live in the parsonage and candidate for a month, so as to know whether our climate and surroundings are agreeable to them, for both are semi-invalids. (T.S.R.35. 2 P.M. 38. S.S. 37.)

Dec. 28. Monday. Still foggy weather. Received letters from Chester, Eunice and Lizzie Westerfield, the latter now visiting in Stockton, and wrote to Eureka. Rev. and Mrs. Robinson called. She seems to be quite young, about 30, I should think, while he may not be over 40 yrs. old, and both seem pleasant. Last Sat. Theresa forwarded to Susie Pascoe our Christmas gift of a gold watch, a number of us contributing to it, and the return receipt of Registry arrived today. (T.S.R. 34. 2 P.M. 39. S.S. 37.)