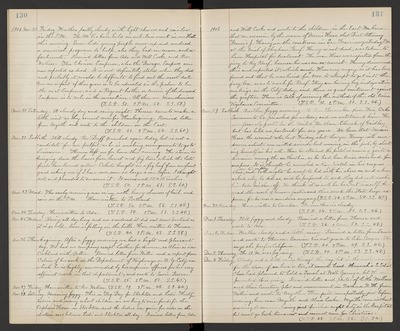 1908. Nov. 20. Friday. Weather partly cloudy with light showers and rainbow in the P.M. The M.E.'s have held an entertainment in our Hall this evening. Some Lodi young people came up and rendered a musical program to help, also they had ice cream and refreshments. Received letters from Ada and Will Cooke and Rev. Wallace. The Chinese Emperor, also the Dowager Empress are now reported as dead. It is not definitely stated when they died and probably it would be difficult to find out the exact date. Now an infant of three years is to be educated in the palace to be the next Emperor, and a Regent brother or cousin of the deceased Emperor is to rule in the meantime. All these are Manchurians. (T.S.R. 50. 2 P.M. 68. S.S. 58.)

Nov. 21. Saturday. A cloudy day and rainy night. Theresa came to make a little visit as they cannot come for Thanksgiving. Received letter from Myrtle and wrote to the children in the East. (T.S.R. 48. 2 P.M. 64. S.S 60.)

Nov. 22. Sabbath. Still cloudy. Rev. Duff preached again today but is not a candidate for our pulpit, as he is making arrangements to go to Livermore. Theresa left us for home this evening. The storm is bringing down the leaves from locust and fig trees, which the late frosts have turned yellow. Celeste brought in a fig leaf from our front yard asking me if I have ever seen so large a one before. I thought not, and proceed to measure it. It measured 13x15 inches. (T.S.R. 50. 2 P.M. 61. S.S. 60.)

Nov. 26. Thanksgiving. After a foggy morning we had a bright and pleasant day. We had no company except Luther for dinner, as Olive is in Oakland with Nellie. Received letter from Willie and a report from Calvin of his work in the Department of Highways in N.Y. City, in which he is highly commended by his superior officers for his very efficient work in that department, and wrote to Susie Pascoe. (T.S.R. 35. 2 P.M. 51. S.S. 45.)

Nov. 28. Saturday. Morning foggy. This is Tag-Day for Stockton and Lodi. Thirty ladies and many school children are working to raise funds for the Orphans 'Home' in Stockton, and the ladies are given free rides on the electric cars between Lodi and Stockton all day. Received letters from Ada

1908. and Will Cooke and wrote to the children in the East. We learn that an assassin by the name of Morris Haas, shot Dist. Attorney Francis J. Heney in the courtroom in San Francisco yesterday P.M. at the trial of Abraham Ruef. Heney is not dead, was taken to Lane Hospital for treatment. The man Haas was rejected from the jury to try Ruef, because he was an ex-convict. Heney discovered this and reported it, which made Haas very angry, as it has been found met that he was hired for $4000. to attempt to get into the jury box, so as to work for Ruef. They are having big indignation meetings in the City today, and there is great excitement against the grafters. There is talk of reviving the methods of the old time Vigilance Committee. (T.S.R. 31. 2 P.M. 51. S.S. 46.)

Nov. 29. Sabbath. Another foggy morning. A Rev. Shoemaker from Fair Oaks Sacramento Co. preached for us today and we entertained him. He was formerly pastor for the United Brethren Church of Gridley but has held no pastorate for six years. We hear that Morris Haas, the ex-convict who, last Friday shot Lawyer Heney with murderous intent, committed suicide last evening in the jail, by shooting himself in his cell. How he obtained the pistol is causing quite a discussion among the authorities, as he had been twice searched for weapons. It is thought he concealed a tiny pistol in his congress shoe over his ankle and both nights he went to bed with his shoes on, and when asked why he did so, said he "preferred to ", and they did not make him take his shoes off. We think it is well he has put himself beyond the reach of human justice and thus saved the State large expense, for he was a murderer anyway. (T.S.R. 30. 2 P.M. 50. S.S. 47.)

Dec. 4. Friday. Cloudy and a little rainy through the day, but in the early evening for the space of an hour or two, it rained hard. Hannah's S. School Class had planned to hold a Social at Will Young's, but the rain prevented their going. Received letter and photos of little Willard and their Cemetery plot and monument in Nashua, N.H. from Willie and wrote to Myrtle. Then quite unexpectedly, just before evening, here came Myrtle and Alma Locke. Myrtle came without warning to any one, having just finished night duty in the Hospital but must go back tomorrow and cannot come for Christmas. (T.S.R. 48. 2 P.M. 56. S.S. 54.)