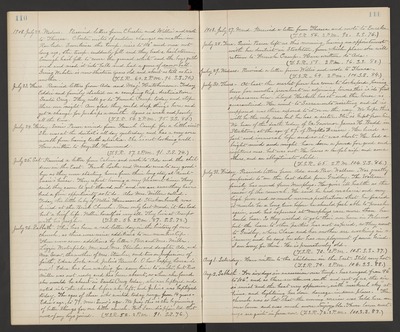 1908. July 22. Wednes. Received letter from Chester and Willie and wrote to Theresa. Chester writes of sudden changes in weather in Rawhide. Sometimes the temp. rises to 110- and once not long ago, the temp. suddenly fell and they had a hail storm. Enough hail fell to cover the ground white and the boys gathered and made it into balls and had a game of snow ball. Irving Webster is now thirteen years old and about as tall as his mother. (T.S.R. 60. 2 P.M. 96. S.S. 76.)

July 23. Thurs. Received letters from Ada and Maj. Hutchinson. Today Eddie and family started on a camping trip, destination Santa Cruz. They will go to French Camp today and stop there over night. Am glad they could drop things here and get a change for perhaps a month. Agnes is weak and poorly all the time. (T.S.R. 54. 2 P.M. 95. S.S. 80.)

July 24. Friday. Susie Pascoe arrived from French Camp for a little visit. She was at the dentist's all day yesterday and has a very sore mouth from having teeth extracted. She is not looking well. Have written to Myrtle Hammond. (T.S.R. 57. 2 P.M. 91. S.S. 74.)

July 25. Sat. Received a letter from Calvin and wrote to Ada and the children in the East. Frank Locke and Maude came to say goodbye as they were starting home from their long stay at Aunt Susie's house. They report having a very pleasant time. They said they came to get "thawed out" and we are sure they have had a fine opportunity so to do. Also Mrs. Miller called. Today the little baby of Nellie Hammond Stuckenbruck was buried at the Brick Church. Born only last Mond. it has had but a brief life. Nellie herself is very ill. They live at Ocampo with his people. (T.S.R. 53. 2 P.M. 87. S.S. 72.)

July 26. Sabbath. This has been a red-letter day in the history of our church, as there were nine additions to our membership. There were seven additions by letter. Rev. and Mrs. Miller, Lizzie Westerfield, Mr. and Mrs. Stemler and daughter Ada, and Mrs. Snow, the mother of Mrs. Stemler, and two on profession of faith, Edna Locke and Julius Bruml. O how happy Laura is now! Edna has been waiting for some time to unite, but Rev. Miller was not ready and has been absent, so when she found she would be absent in Santa Cruz today, she was baptized and voted into the church before she left, and Julius was baptized today. The ages of those who united today range from 14 years. Edna's age, to 79, Mrs. Snow's age. We pray this is the beginning of better things for our little church. But I am disappointed that none of my boys joined. (T.S.R. 52. 2 P.M. 91. S.S. 76.)

July 30. Thurs. At last the scarlet fever has come to Lockeford, having been for months prevalent in adjusting towns, this is to first appearance here. Lloyd Haskell has it and the house is quarantined. He went to Sacramento visiting and it is supposed was there exposed to it, or on the way. we hope this will be the only case but he has a sister. She is kept from him. we hear of the death today of Ex. Governor James H. Budd in Stockton, at the age of 57, of Bright's Disease. He lived a fast and immoral life and so it was short. He had a bright mind and might have been a power for good and righteousness, but was not. He leaves a lawful wife and some others, and an illegitimate child. (T.S.R. 65. 2 P.M. 104. S.S. 86.)

July 31. Friday. Received letters from Ada and Rev. Wallace. Was greatly surprised to see the last week dated from Gridley. The Wallace family has moved from Murphys. He gives ill health as the cause of the removal. He said he had malaria and very high fever and so much nervous prostration that he feared it would be a long time before he should feel able to preach again, and his expenses at Murphys were more than he could bear. So they wished to go to their own home in Palermo but the lease to other parties has not expired, so they went to Gridley, where Clara and her mother are working in a Cannery and he says he also has employment of some kind. I am sorry for them. He is prematurely old. (T.S.R. 70. 2 P.M. 105. S.S. 37.)

Aug. 2. Sabbath. For six days in succession our temp. has ranged from 96- to 106- and as there are showers south and east of us, the air is moist and the heat very oppressive, with "mackerel sky" at times, and lightning has done damage in some places. The church was so hot that the evening service was held here on our lawn and was much more enjoyable. These lawn meetings are quite in favor now. (T.S.R. 72. 2 P.M. 100. S.S. 83.)