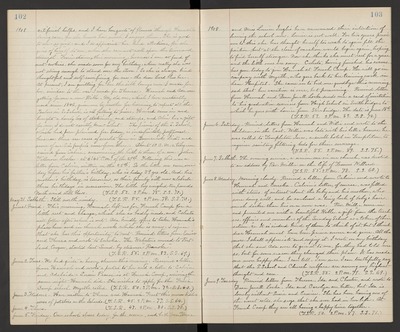 1908. artificial helps, and I have bouquets of flowers through Hannah's loving care, for she knows how much I enjoys them. She is good to me - so good - and I do appreciate her kind attentions, for she gives of herself to one, when she cannot well spare the time and strength. For instance, this morning, because I am so fond of nut-cookies, she made some for my birthday, when really she was not strong enough to stand over the stove. So she is always kind thoughtful and self-sacrificing for me - the dear Lord bless her. At present, I am quilting for her the silk lounge cover I made for her, similar to the one I made for Theresa. Hannah and Ada are getting for me a new Bible. My old one, which I have constantly used since 1846, given me by mother for learning to repeat all the Psalms in S. School, is all falling to pieces. Howard came in and bought a lovely box of stationery and stamps, and Alice has a gift for me, I do not exactly know what. The picnic of the S. School, which had been planned for today, is indifinitely postponed, because there are cases of scarlet fever in Brunswick Dist. and some of our S.S. pupils come from there. About 10 A.M. a telegram arrived from Calvin, announcing the birth to them of a son - John Fillmore Locke - at 6:45 P.M. of the 29th. Following this was a letter from Calvin, written on the 25th. So the little one came one day before his father's birthday, who is today 39 yrs. old. And his mother's birthday is tomorrow, so their family will now celebrate three birthdays in succession. The little boy weighed ten pounds North wind still blows. (T.S.R. 52. 2 P.M. 75. S.S. 70.)

June 1. Mond. This morning, Hannah left us for French Camp for a little rest and change, which she so badly needs, and Celeste will follow after school is out. Ada kindly offers to take Hannah's place here and in church work while she is away - I rejoice that she has this opportunity to rest. Received letters from Eunice and Theresa and wrote to Eureka. The Websters moved to Portland, Oregon, started last Sund. by steamer "Ranoke." (T.S.R. 55. 2 P.M. 83. S.S. 69.)

June 2. Tues. We had quite a heavy shower this evening. Received a letter from Hannah and wrote a postal to her and a letter to Calvin and Adelaide. Susie Pascoe is at French Camp, arriving the same night - Hannah did. She wishes to apply for the French Camp school. Myrtle called. (T.S.R. 50. 2 P.M. 72. S.S. 60.)

June 5. Friday. Our school closes today for the season, and both Mr. Bower

1908. and Miss Louise Inglis have announced their intention of leaving the school now. Louise is not well. For two years previous to this she has thought herself too weak to again fill the position, but at the close of vacation would begin again, hoping to find herself stronger. Now she thinks she must rest for a year and the little ones are sorry. Celeste, having finished his exams. has gone today to join Hannah at French Camp. He will go in company with Myrtle, who goes back to her training work in Lane Hospital. She came in to bid, me goodbye this morning sad that her vacation is over, but preserving. Received letter from Hannah and Dean Jewett Locke sends me a card of invitation to his graduation exercises from High School in Southbridge, to which he goes with Louise from Stirbridge. The date is June 18th. (T.S.R. 53. 2 P.M. 83. S.S. 74.)

June 6. Saturday. Received letters from Hannah and Willie and wrote to the children in the East. Willie was late with his letter because he was called to Templeton Inn, a swell hotel in Templeton, to engineer sanitary filtering beds for their sewerage. (T.S.R. 55. 2 P.M. 89. S.S. 75.)

June 8. Monday. Morning cloudy. Received a letter from Calvin and wrote to Hannah and Eureka. Calvin's letter, of course, was filled with items of interest about the baby and his mother, who were doing well, and he enclosed a tiny lock of baby's hair, much darker than his own ever was. Rev. Miller came in and presented me with a beautiful Bible, a gift "from the teachers, officers and members of the Sunday School as a token of their esteem," &.c. It is indeed kind of them to think of it, but I think dear Hannah must have been prime mover and giver. All the more I shall appreciate and enjoy it. I wrote on my birthday that she and Ada were to give it to me, for they had told me so, but for some reason they changed their plan. It has made me more happy than I can tell. I am sure I can truthfully say that the S. School and Church welfare are among my highest thought and care. (T.S.R. 55. 2 P.M. 79. S.S. 69.)

June 9. Tuesday. Received letters from Theresa, Ida and Chester, and wrote to Dean Jewett Locke. Ida and Carolyn are better, but Ida is lonely without Susie and Eunice. She has been having one of the worst colds, she says, that she ever had in her life. At French Camp they are all having a happy time together. (T.S.R. 50. 2 P.M. 87. S.S. 71.)