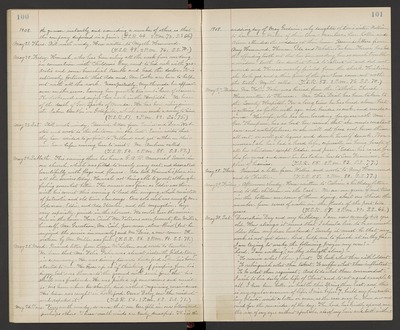 May 22. Friday. Hannah, who has been ailing all the week from over doing in connection with Children's Day, went to bed sick with gastritis and some bronchial trouble and had the doctor. It is extremely fortunate that Ada and Mr. Cooke are here to help out with all the work. Unexpectedly, Myrtle made her appearance on the scene, having been granted two weeks' leave of absence. She looks well and enjoys her work in the Hospital. We hear of the death of Gov. Sparks of Nevada. He has been ailing since the labor troubles in Goldfield, which were such a worry to him. (T.S.R. 51. 2 P.M. 82. S.S. 75.)

May 23. Sat. Still north windy. Received letters from Eunice and Dean Webster and wrote to the children in the East. Eunice writes that they have decided to go first to Portland and get settled in their new home before coming here to visit. Mr. Ambrose called. (T.S.R. 54. 2 P.M. 88. S.S. 83.)

May 24. Sabbath. This evening there has been a G.A.R. Memorial Service in our church, which was filled to nearly every seat, and decorated beautifully with flags and flowers. Ada took Hannah's place in all the services today, Hannah not being able to go out, although feeling somewhat better. The music was fine, as Eddie was there with his cornet this evening to lead the singing, which consisted of patriotic and old-time war songs. One solo each waas sung by Mr. Lopeman, Eddie, and Ada Stemler, and the congregation, boys very especially, joined in the choruses. We could hear the music here in the house. Four Civil War Veterans were present, Rev. Miller himself, Mr. Garretson, Mr. Coil, poor man, stone blind (but he enjoyed the service immensely) and Mr. Davis, a new-comer. The oration by Mr. Miller was fine. (T.S.R. 56. 2 P.M. 94. S.S. 78.)

May 25. Mond. Received letter from Lizzie McLellan and wrote to Eureka. We learn that Mr. Felix Faber was almost instantly killed today in a runaway. He was driving towards Lockeford when his horse started to run. He rose up as if thinking of jumping from his buggy, but was thrown to the ground with such force that his skull was fractured. He was picked up unconscious and carried to his home where he shortly died without regaining consciousness. His team was caught in Lockeford. Oscar Daley saw the accident and reported it. (T.S.R. 56. 2 P.M. 83. S.S. 71.)

May 26. Tues. Very north windy, so severe that one tree fell in our bottom and perhaps others. These north winds are truly dreadful. This is the

1908. wedding day of May Goodwin, only daughter of Lou's sister Nellie, to Lawrence E. Miller of their town - Manteca. Lou, Lottie and Alma attended the wedding at their home. Received letters from Amy Hammond, Theresa, Ida and Webster Parker. Theresa has had the offending tooth out that has been making her so much trouble - a wisdom tooth. One dentist tried to extract it and did not succeed and Theresa nearly fainted the shock. This time she took gas, and a thin piece of the jaw bone came out with the tooth. Myrtle called. (T.S.R. 53. 2 P.M. 76. S.S. 70.)

May 27. Wednes. Mr. Felix Faber was buried from the Catholic Church. Have written to Theresa. Mr. Chas. Dial has been taken to the County Hospital. For a long time he has lived alone but is getting so feeble with age and besides, is sick, and needs a nurse. His wife, who has been boarding for years with Mrs. Geo. Thompson, has so lost her mind that she needs constant care and watchfulness, or she will set fires and burn them all out, or will get liquors and drink herself drunk. Poor woman! she has had a hard life, especially in being bereft of all her children except Eddie and Jesse. Eddie has cared for her for years and now he has taken her to San Francisco, his place of business. (T.S.R. 55. 2 P.M. 83. S.S. 77.)

May 29. Friday. Afternoon cloudy. Have written to Calvin a birthday letter and to the children in the East. We see our grove of nut trees in the bottom are some of them dying, about one third the number, from excess of water in the floods of the past two years. (T.S.R. 57. 2 P.M. 80. S.S. 66.)

May 30. Sat. Decoration day and my birthday. I am now seventy two yrs. old. How strange it seems that I should live to be so much older than my dear husband! Surely it must be that my work is not yet done. Lord, help me to finish it in thy fear. I am trying to make the following prayer my own: - "Lord, I am willing" (in thy strength alone) - "To receive what thou givest, To lack what thou with holdest, "To relinquish what thou takest, To suffer what thou inflictest, "To be what thou requirest, And to do what thou commandest." I wish to live daily the life of Christ and to set a good example to all. I have been better in health this Spring than last, and this is my regular manner of life. I rise before 7, build my fire, water my plants, write a letter or more, as the case may be, then sew and read for the remainder of the day. The Lord has kindly spared me the use of my eyes without spectacles, also of my hair and teeth without