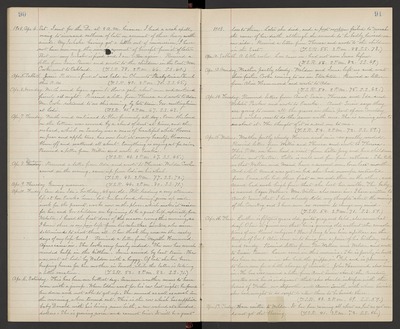 1908. Apr. 4. Sat. I sent for the Dr. at 2 A.M. because I had a weak spell, owing to increased asthma of late on account of these heavy with winds. My Inhaler having got a little out of commission, I have not been receiving the usual amount of benefit from it of late. But now my Inhaler is fixed and I am better again. Received a letter from Susie Pascoe and wrote to the children in the East. Mr. Cooke went to Oakland. (T.S.R. 38. 2 P.M. 66. S.S. 60.)

Apr. 6. Monday. North wind began again to blow a gale about noon and continued fiercely all night. Received a letter from Theresa and wrote to Ada. Mr. Cooke returned to us this evening by late train. Geo. meeting him at Lodi. (T.S.R. 45. 2 P.M. 67. S.S. 63.)

Apr. 7. Tuesday. North wind continued to blow furiously all day. Even the land on the bottom was covered by a cloud of dust at times, and the orchard, which on Sunday was a mass beautiful white blooms on pear and apple trees, has now lost its snowy beauty, blossoms blown off and scattered all about. Everything is crying out for rain. Received a letter from Willie and wrote to Eureka. (T.S.R. 46. 2 P.M. 67. S.S. 65.)

Apr. 10. Friday. Our dear Ida's birthday, 4 yrs. old. Still leading a very [?] life at her Eureka home, but her husband, having given up mill work for the present, works now on the place, which makes it easier for her, and he children are beginning to be a great help, especially her Webster. I heard the first doves of the season coming this morning, so I know there is one pair left from the relentless hunters, who seem determined to shoot them all. O how thick they were in the early days of my life here! Received a letter from Myrtle Hammond. Agnes came in. She looks very poorly indeed. She now has much need help in the kitchen. Irene arrived by last train. She was met at Lodi by Weldon with a buggy. Of late she has been keeping house for her mother in Sunol, while the latter is taking a little vacation. (T.S.R. 52. 2 P.M. 82. S.S. 71.)

Apr. 11. Saturday. This has been our hottest day. Summer weather seems to have come with a jump. When Eddie went for his cow last night, he found her down and not able to get up. She seemed as well as usual in the morning when turned out. This is the cow which has supplier baby Donald with his living since birth, a cow valued at a hundred dollars. She is growing worse and cannot live. It will be a great

Apr. 14. Tuesday. Received letters from Aunt Susie, Theresa and Ida and Webster Parker and wrote to Eureka. Aunt Susie says they are going to move all the graves in their part of our Cemetery and wishes me to do the same with ours. She is coming soon to see about it. The thought of it is a sad one to me. (T.S.R. 54. 2 P.M. 72. S.S. 59.)

Apr. 15. Wednes. Weather partly cloudy. How we wish rain so greatly needed. Received letters from Willie and Theresa and wrote to Theresa. This P.M. we have had a visit from Lilla Jory and her children Lilian and Buston. Lilla is well and free from asthma. She tells us that Wallace and Mand have a second son, born last month. And while Mand was yet in bed she had mumps, contracted from Erma, who had them first on one side then on the others, and Mand had such high fever that she lost her milk. The baby is named Edgar Wallace. Mrs. Miller also came in. I have written to Aunt Susie that I have already told my thoughts about the morning of the Cemetery and I have seen so occasion to change my mind. (T.S.R. 54. 2 P.M. 71. S.S. 59.)

Apr. 16. Thurs. Luther is fiftytwo years old, quite gray and bald, also somewhat deaf. O how it gives me that he is growing old without the consolations of our blessed religion! How I long to see him a pillar in the temple of God! Alice came in to being me a piece of his birthday cake and candy. Received letters from Rev. Wallace and Weldon and wrote to Susie Pascoe. Laura came in this morning. She is poorly in health has been so were since she had the grippe in Feb. and is planning to leave room for a little change of climate. John Hammond also came in. He has also received a letter from Aunt Susie about the Cemetery matter and he is indignant that she should inter fire with the bodies of Father, our stepmother and Annie Smith, with whose burial she had nought to do except to allow them to be buried there. (T.S.R. 48. 2 P.M. 69. S.S. 59.)