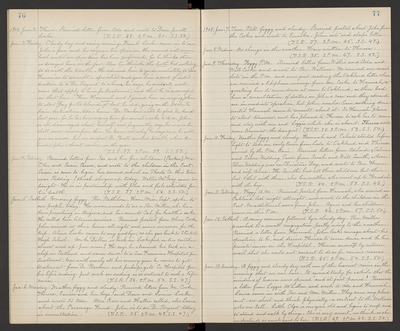 Jan. 3. Friday. Cloudy day and rainy evening. Frank Locke came in to see John's face and he says in his opinion the wound will never heal until an operation has been performed, for he thinks there is decayed bone in the jaw. Also he thinks the tooth had nothing to do with the trouble. He advised him to immediately to San Francisco to consult a specialist and gave him a card of introduction to a Dr. Bryant to whom he says, he send all such cases that apply to him for treatment, and that he is successful in that line. Then Hannah and I joined him in urging John to start today for Oakland and at last he did, going on the 11 o'clock train, destination, Ada's home. Dr. Barbour will be glad he has at last gone, for he has been urging him for several weeks to do so. John is all discouraged about himself, and frequently says he is sure he shall never recover from this. We know not why he says so, as he will give no reason, but we suspect Dr. Powell seented trouble when he treated John's throat earlier in the year. (T.S.R. 37. 2 P.M. 59. S.S. 53.)

Jan. 4. Saturday. Received letters from Ida and her four children (Parker), Mrs. Ober and Susie Pascoe, and wrote to the children in the East. Susie is soon to begin her second school in Shasta Co. this time near Redding. I think she goes up today. Walter McGary came in tonight. He is in partnership with John and feels solicitors for his health. (T.S.R. 37. 2 P.M. 54. S.S. 50.)

Jan. 5. Sabbath. Morning foggy. Rev. Rathblone, Home Miss. Supt. spoke to our people today. He recommends to us a Rev. Miller, who has been preaching in Arizona, and has come to Cal. for health's sake. He called here between service. Received postal from Alma Cooke. John arrived at their home all right and seems no worse for the trip. Alma Locke came to say goodbye, as she goes back to Stockton High School. Mike Dillon is back in Lockeford on two crutches almost used up - poor man! He says he strained his back in a shop in Portland and came down to a San Francisco Hospital for Treatment. Now with Marly all his money gone he comes to get treatment from Dr. Barbour and perhaps go to Co. Hospital for his life's ending. Just such an ending as is natural to such a life course. (T.S.R. 36. 2 P.M. 52. S.S. 47.)

Jan. 9. Thursday. Foggy P.M. Received letters from Willie and Ada and Will Cooke and wrote to Rev. Wallace. We Received our mail late in the P.M. and were just reading the Oakland letter when we received a telephone message from Mr. Cooke to Hannah requesting her to come down at once to Oakland, as there had been a consultation of doctors on John's case and they advised an immediate operation, but John would have nothing done until Hannah came to consult about it. So Hannah plans to start tomorrow, and his phoned to Theresa to ask her to come and stay with me and Lizzie while she is absent. Theresa will come tomorrow the dear girl! (T.S.R. 38. 2 P.M. 53. S.S. 50.)

Jan. 10. Friday. Weather foggy and cloudy. Hannah and Celeste started before light to take an early train from Lodi to Oakland and Theresa arrived by the P.M. train. Received letters from Adelaide & Calvin and Silver Wedding Cards from Sarah and Will Smith, whose Silver Wedding was on Christmas Day, and wrote to Bro. Horace and wife Anna. The Smiths had all their children but their lost Ethel with them, also her mother who went up to Ferndale with the boys. (T.S.R. 44. 2 P.M. 53. S.S. 48.)

Jan. 12. Sabbath. A rainy morning followed by a cloudy day. Rev. Miller preached to a small congregation, partly owing to the weather. Received a letter from Hannah. John lacks courage about his operation to be and desires Theresa to come down and be his private nurse in the Hospital. Theresa answered by return mail that she could not consent to do so for various reasons. (T.S.R. 45. 2 P.M. 54. S.S. 50.)

Jan. 13. Monday. A foggy and cloudy day with one of the heaviest rains in the evening that we ever have. It seemed truly for a while that the "windows of heaven were opened" and it just poured! Received a letter from Lizzie McLellan and wrote to Ada and Hannah. Laura came in with Rev. and Mrs. Miller. They seem very pleasant - are short and thick physically a contrast to the Wallaces who are tall. Little Olga is one year old and begins to creep and to stand and walk by things. She is very smart, We think, as she understands so much said to her. (T.S.R. 49. 2 P.M. 62. S.S. 50.)