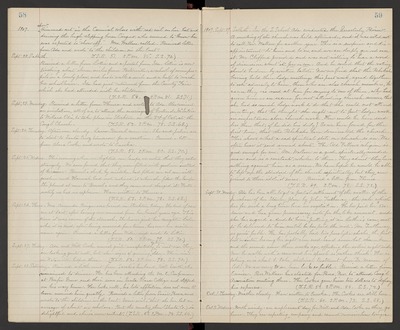 1907. show trimmed out in the Carnival colors with red veil on her hat and driving the high-stepping horse Cinquo, who seemed to know he was expected to "show off". Mrs. Wallace called. Received letter from Ada and wrote to the children in the East. (T.S.R. 51. 2 P.M. 85. S.S. 70.)

Sept. 22. Sabbath. Received a letter from Lottie and a postal from Ida. Lottie is now teaching about eleven miles from Porterville, a school of nine pupils in a lonely place, and has to walk a mile and a half to reach her school house. Ida had just returned from the County Fair which she had attended with her children. (T.S.R. 54. 2 P.M. 81. S.S. 71.)

Sept. 25. Wednes. This evening when we lighted our lamps, we noted that they acted strangely. We soon found that they were filled with gasoline instead of kerosene. Bruml's clerk, by mistake, had filled our oil can with gasoline and Hannah had not noticed it when she filled the lamps. She phoned at once to Bruml's and they came and changed it. Fortunately we had no explosion. Have written to Theresa. (T.S.R. 53. 2 P.M. 78. S.S. 68.)

Sept. 26. Thurs. Mrs. Amanda Ringer was buried in Stockton today. She died of cancer at last, after having one removed from her breast years ago. This time it was cancer of the stomach. She leaves just her daughter Lulu who, it is said, after being married four times, has now her maiden name again. Received a letter from Willie and wrote to Lottie. (T.S.R. 50. 2 P.M. 79. S.S. 70.)

Sept. 27. Friday. Ada and Will Cooke arrived quite unexpectedly by train to visit us. They are looking quite well, but show signs of growing older. Their visit in Watsonville helped them. (T.S.R. 52. 2 P.M. 78. S.S. 70.)

Sept. 28. Saturday. Received a little visit from Sarah's husband, Will Smith, who remained to dinner. He has been attending the M.E. Conference at Pacific Grove and their sons in Santa Clara College and stopped on his way home. He looks well, his late affliction does not seem to have worried him greatly. Received a letter from Susie Pascoe and wrote to the children in the East. Susie writes that she has but an average of about six scholars. But the country there (Shasta Co.) is delightful and she is more content. (T.S.R. 51. 2 P.M. 74. S.S. 66.)

1907. Sept. 29. Sabbath. In the S. School Ada conducted the Quarterly Review. A meeting of the church was held afterwards, and it was voted not to call Rev. Wallace for another year. This is a surprise and disappointment to him and to us, and we are deeply grieved over it. Mr. Clifford presided and was not willing to hear a word of discussion about it, pro or con. And he ruled that the voting should be done by written ballots. Now we find that the Rebekahs having held three Lodge meetings this past week, agreed together to vote adversely to him, those who are also church members, because they are vexed at him for saying to one of them, who had given him us an excuse for not attending church services, that she had so much Lodge work to do that she could not attend meetings, that he thought she ought not to put Lodge work in importance above church work. How could he have said less than that, if he did his duty? So we have found, for the first time, that the Rebekahs have dominated the church. This shows what a sad spiritual slate our church is in. We often hear it said around about, "The Odd Fellow's religion is good enough for me". Mr. Wallace is a good, spiritually minded man and is a constant rebuke to them. They admit they have nothing against him as a man. We have hoped he would be able to lift up the standard of the church spiritually, but they are "Joined to their idols", it seems. Received a letter from Theresa. (T.S.R. 49. 2 P.M. 78. S.S. 72.)

Sept. 30. Monday. Ada has been able to get a partial settlement of the matter of the purchase of her Stanley place by John Tretheway - the sale which has for such a long time been in negotiation. He has paid her $500. down and has given promissory note for the like amount, and she has signed a deed to him, putting it in Luther's care, not to be delivered to him until he has paid the note. Mr. Thretheway is quite feeble. He has probably had two paralytic shocks, the first last winter, leaving his right arm and hand somewhat shrunken and the second some three weeks ago, affecting the entire right side. Now he walks with a cane and his speech is rather thick. He is taking, or is about to take, electrical treatment form Dr. Mason of Lodi. We are sorry to see him look so feeble. Received a letter from Eunice. Rev. Wallace has started for Reno, Rev. to attend Cong'l Association meeting there. The Cookes gave him ten dollars to defray his expenses. (T.S.R. 52. 2 P.M. 84. S.S. 72.)

Oct. 2. Wednes. North windy - an unpleasant day for Will and Ada Cooke as they go home. They are expecting company and cannot remain here longer.