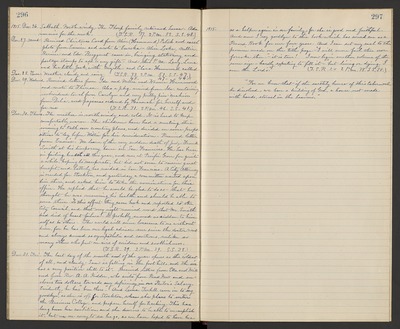 Dec. 27. Mond. Received Christmas Card from Alice (Hammond) Petch and easel photo from Eunice and wrote to Eureka - Alice Locke, Nellie, Bernice and Edw. Bergqurst came in, bringing stationery and postage stamps to add to my gifts. And this P.M. Lucy, Lena and her little "Jack," with Myrtle and Clara Hammond called. (T.S.R. 33. 2 P.M. 51. S.S. 47.)

Dec. 29. Wednes. Received letters from Ida and Nellie and Winnie Hammond and wrote to Theresa. Also a pkg. Arrived from Ida containing embroidered towel from Carolyn and very pretty pin-cushion from Delia, and pajamas ordered by Hannah for herself and for me. (T.S.R. 31. 2 P.M. 46. S.S. 41.)

Dec. 30. Thurs. The weather is north windy and cold. It is hard to keep comfortably warm. The children have had a meeting this evening to talk over cemetery plans, and decided on some propositions to lay before Willie for his consideration. Received letter from Eunice. We learn of the very sudden death of Judy Frank smith at his temporary home in San Francisco. He has been in failing health all this year, and was at Pacific Grove for quite a while, hoping to recuperate, but did not seem to receive great benefit, and latterly has resided in San Francisco. A City Attorney is needed for Stockton, and yesterday a committee waited upon him there, and asked him to take the nomination for this office. He replied that he would be glad to do so - that he thought he was recovering his health and should be able to serve them. To this effect they came back and reported to the City Council, and that very night received word that Mr. Smith had died of heart failure. It probably seemed as sudden to himself as to others. The world will seem lonesome to us without him, for he has been our legal adviser ever since the doctor went and always seemed so sympathetic and courteous, unlike so many others who put on airs of wisdom and snobbishness. (T.S.R. 29. 2 P.M. 39. S.S. 38.)

Dec. 31. Fri. The last day of the month and of the year opens as the coldest of all, and cloudy - Snow is falling in the foot hills, and the air has a very positive chill to it. Received letters from Etta and Will and from Rev. A.A. Kidder, who writes from Rens, Nev. and encloses two dollars towards any deficiency in our Pastor's Salary. Evidently, he has "been there." And Leona Tarbell came in to say goodbye, as she is off for Stockton, Where she plans to enter the Business College, and prepare herself for teaching. This has long been her ambition, and she deserves to be able to accomplish it, but we are sorry to see her go, as we have hoped to have her

"For we know that if the earthly house of this tabernacle be dissolved, we have a building of God, a house not made with hands, eternal in the heavens."