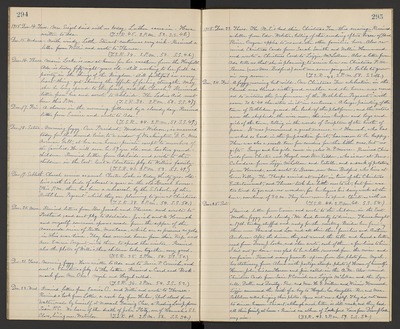 Dec. 16. Thurs. Mani Locke is now at home for her vacation from the Hospital. Ada is today fifty-eight years old - still working to her full capacity in the things of the Kingdom - still faithful in every least thing - yet showing the effects of failing strength. May she be long spared to the family and the Church! Received letter from her and wrote to Adelaide. The Ladies Aid met here this P.M. (T.S.R. 32. 2 P.M. 50. S.S. 47.)

Dec. 18. Satur. Morning foggy. Our President, Woodrow Wilson, is married today for the second time, to a widow of Washington, D.C. Mrs. Norman Galt, at her own home - private except to members of the families. He will soon be 59 yrs. old, and has two grandchildren. Received letter from Adelaide and wrote to the children in the East. Sent a Christmas pkg. to Willie's family. (T.S.R. 43. 2 P.M. 53. S.S. 49.)

Dec. 20. Mon. Received letters from Bro. Josiah and Theresa and wrote to Portland, and sent pkg. to Adelaide. Josiah sent to Hannah and myself souvenir spoons made from the copper of the Anaconda mine of Butte, Montana, which are as precious as gold in this war time. They had arrived home from their trip and Mrs. Emma Sargent with them, to spend the winter. Received also the photos of Willie's three children taken together, very good. (T.S.R. 35. 2 P.M. 54. S.S. 50.)

Dec. 22. Wed. Received letters from Eunice C. and Willie and wrote to Theresa. Received a book from Lottie, a work bag from Helen, Spool-stand from Walter, made by himself at Manual Training Class, a Reading Lamp from Susie P.C. We learn of the death of John Plotz, one of Hannah's S.S. Class, living near Waterloo. (T.S.R. 40. 2 P.M. 56. S.S. 54.)

1915. Dec. 23. Thurs. The M.E.'s had their Christmas Tree this evening. Received a letter from Edw. Webster, telling of the sending of two boxes of Hood River, Oregon apples to us and the other families here. Also received Christmas Cards from Sarah Smith and Nellie Hammond and wrote a Christmas Card to Lizzie McLellan. Also a letter from Ada tells us that she is planning to arrive here on Christmas P.M. Beacon (now Mrs. Bedford) sent me some jonquil bulbs to grow in my room. (T.S.R. 42. 2 P.M. 58. S.S. 56.)

Dec. 24. Fri. A foggy morning but mild. Our Christmas Tree celebration in the Church was blessed with good weather and the house was crowded to witness the performance of the "Bethlehem Pageant," with some 30 to 40 characters in it in costume. A large painting of the town of Bethlehem graced the back of the platform, and the actors were the shepherds, the wise men, the inn-keeper and boys and girls of the town, telling in the words of Scripture of the birth of Jesus. It was pronounced a great success, and Hannah, who has worked so hard in the preparations for it, has reason to be happy. There was also a small tree for candies for the little ones, but no gifts. George and his wife came in, also W. P. Moore. Received Chris Cards from Chester and Hazel, and Rev. Kidder, who is now at Reno, Calendars from Lizzie McLellan and Estelle, and a sack of potatoes from Howard, and wrote to Beacon, now Mrs. Bedford, who lives at Grass Valley. The Thorps arrived at night in time of the Christmas Entertainment, and Theresa took her little ones to it, but Jim was too tired to go, and no wonder, for he begins his dairy work at the hour, sometimes, of 3 A.M. They have come to spend Christmas with us. (T.S.R. 44. 2 P.M. 60. S.S. 54.)

Dec. 25. Sat. Received letter from Eunice and wrote to the children in the East. Weather foggy and cloudy. We had twenty to dinner. Theresa bought a 17lb. turkey, stuffed and ready for the roasting. Besides her family there were Howard and Lou and all their three families and Arthur Ambrose. After the dinner, they sat around the table and heard a letter read from Dean J. Locke, and then wrote, each of them, a few lines to him. I did not go down - was glad to be a little removed from the noise and confusion. Received many presents - apron from Lou, photo from Myrle, box stationery from Alma with postage stamps, photo of Horace of himself. Horace, John, his son. Horace and Jim called in the A.M. Also received Christmas Cards from Susie P. Cornish and Lizzie McLellan and the Lyndalls, Debbie and Dorothy, Rev. and Mrs. H. G. Miller and Winnie Hammond. Lizzie announced the birth of a boy to Hazel, her daughter. Rev. and Mrs. Sahlstrom called, bringing their photos. Agnes sent me a hdkf. They did not come to dinner, because Stewart, although much better, is still weak, and they had all their family at home. Received an album of Lockeford Views from Dean J. Locke very nice. (T.S.R. 43. 2 P.M. 59. S.S. 54.)