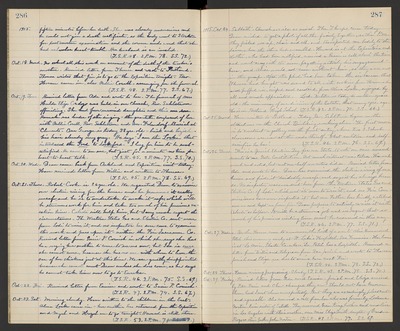 1915. fifteen minutes before her death. She was already unconscious and he could not give a death certificate, so the body went to Stockton for post mortem examination and the coroner sends word that she had valvular heart trouble. Her husband is an invalid. (T.S.R. 48. 2 P.M. 78. S.S. 72.)

Oct. 18. Mond. No school all this week on account of the death of the teacher-s mother. Received letter from Theresa and wrote to Portland. Theresa writes that Jim is to go to the Exposition tonight. Bro. Horace came in, also Nellie Corell, arranging for the funeral. (T.S.R. 48. 2 P.M. 77. S.S. 67.)

Oct. 19. Tues. Received from Ada and wrote to her. The funeral of Mrs. Hulda Eliza Cordozo was held in our Church, Rev. Sahlstrom officiating. She had four married daughters and this one son. Hannah was leader of the singing - the quartette composed of her with Nellie Corell, Rev. Sahlstrom and Mr. Folendorf. Burial at Clements. Our George is today 38 yrs. old - brisk and boyish his hair already very grey. He says - "I am the Locke that introduced the Ford to Lockeford." I long for him to be soul-satisfied. He came to see me, but just for a minute - no time for heart-to-heart talk. (T.S.R. 45. 2 P.M. 77. S.S. 70.)

Oct. 21. Thurs. Robert Cooke is 26 yrs. old. We requested Dean to examine our electric wiring for the house and he pronounces it really unsafe, and he is to undertake to make it safe, which will be strenuous work for him and take too much of his previous vacation time. Celeste will help him, but I very much regret the circumstances. The Western States Gas and Electric Co. sent men from Lodi to wire it, and no inspector has ever came to examine the work and pass upon it - neither the Fire Insurance Co. Received letter from Susie P. Cornish in which she says she has been urging her mother to come to see us now, but Ida is sure she cannot come, because she has no one with whom to leave the care of her chickens just at this time. We are greatly disappointed because she cannot meet Dean unless she does come, as he says he cannot take time now to go to Eureka. (T.S.R. 46. 2 P.M. 75. S.S. 69.)

1915. Oct. 24. Sabbath. Church services as usual. The Thorps came today. Dean wished to get a photo of all the family together, so this P.M. they picked me up, chair and all, and transported me bodily to the lawn, where the others had assembled. Howard is at the Exposition and Luther, who had been notified, received a business call about the time and went away with the man, forgetting entirely his engagement here, and Alice would not come without him, so they were not in the group. After the photo had been taken, the ice-cream that Theresa had brought was served to all, with cookies from Hannah and puffed rice, crisped and candied, from Alma Locke, enjoyed by all and much appreciated. Locke Webster is today seventeen years old - the anniversary of our division of the Estate, that many yrs. ago. He is in Portland High School. (T.S.R. 42. 2 P.M. 70. S.S. 66.)

Oct. 25. Mond. Have written to Portland. Today Rev. Sahlstrom began on the alterations on the Church Building, working alone. The first move is to construct a gallery over the front entry, where two S. School classrooms are now at the ends thereof. What ambition and self sacrifice he has! (T.S.R. 46. 2 P.M. 76. S.S. 69.)

Oct. 26. Tues. This is a Special Election Day for our State, to vote on nine amendments to our State Constitution. Not much interest was taken. Hannah went and voted, but not one-half our voters did so. Received letter from Ada and wrote to her. Dean has examined the electric wiring of our house and finds it decidedly unsafe, and says it has always been so. No inspector was ever sent here from the Western States Gas and Electric Co. of Lodi, which sent its men to wire it, and no Fire Commissioners have ever inspected it, but our Father has kindly watched over us and kept us from fire. Dean propose to entirely re-wire it with Celeste as helper. It will be a strenuous job and we regret that so much of his precious visiting time must be consumed in this way. (T.S.R. 46. 2 P.M. 77. S.S. 71.)

Oct. 27. Wednes. Brother Horace came to announce the birth of a son to Alice Hammond Petch this morning early at St. Luke's Hospital, San Francisco. Her home is at Le Moin, Sharta Co. where Dr. Petch has a hospital. Received a letter from Willie and telegram from Bro. Josiah and wrote to Theresa Josiah and Eliza are due to arrive here next Fri. (T.S.R. 46. 2 P.M. 78. S.S. 72.)

Oct. 29. Friday. Received letters from Ada and Eunice. Josiah and Eliza arrived by P.M. train and O how changed they are! Should not have known them had I met them unexpectedly. But they are exceedingly pleasant and agreeable. Also received a call from her who was formerly Lodema Norton, twin sister of Estelle. They married twin King brothers and now live in Los Angeles with their mother, once Miss Eliza Smith, daughter of Grandma Rogers their father John Norton. (T.S.R. 48. 2 P.M. 77. S.S. 69.)