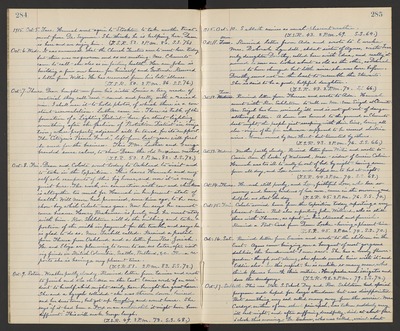 Oct. 6. Wed. It was announced that the Church Trustees were to meet here today but there was no quorum and so no meeting. Mrs. Clements came to call she also is in failing health. Her son John is building a fine new house for himself and Gertrude. Received a letter from Willie. He has recovered from his late illness. (T.S.R. 50. 2 P.M. 86. S.S. 76.)

Oct. 7. Thurs. Dean brought me from his sister Louise a tray made of material they call "reed" - round and pretty with a raised rim. I shall use it to hold photos, of which there is a constant accumulation. Luther came in. There is talk of the formation of a "Lighting District" here for street lighting something after the fashion of "Protection District" in irrigation, where property adjacent will be taxed for its support. The "Citizen's Picnic Fund," left from last year will first be used for the business. This P.M. Luther and George branded some calves, to show Dean the old Mexican method. (T.S.R. 50. 2 P.M. 82. S.S. 72.)

Oct. 8. Fri. Dean and Celeste went today to Oakland to visit and to "take in" the Exposition. This leaves Hannah and myself sole occupants of this big house, and now it is very quiet here. The work, in connection with cow and chickens is altogether too much for Hannah in her present state of health. Will Moore had promised, some time ago, to be our chore - boy while Celeste was gone. Now he says he cannot come because Henry Brakeman is poorly and he must stay with him. Rev. Sahlstrom will do the milking and take a portion of the milk in payment for the trouble, and says he is glad to do so. Mrs. Tarbell called. Received a postal from Theresa from Oakland and a letter from Bro. Josiah. He and Eliza are planning to come to see us later, after visiting friends in British Columbia, Seattle, Portland, x.c. Theresa reports she is having a very pleasant time. (T.S.R. 51. 2 P.M. 83. S.S. 72.)

Oct. 9. Satur. Weather partly cloudy. Received letter from Eunice and wrote to Josiah and the children in the East. Eunice wrote of an accident to herself, which might easily have brought her great harm. She and a by cycle collided - she was thrown down, bruised and her dress torn, but got up laughing and went home. She says "if it had been a Ford or an automobile it might have been different." This will make George laugh. (T.S.R. 49. 2 P.M. 73. S.S. 68.)

Oct. 11. Mon. Received letter from Ada and wrote to Eureka. Mrs. Deborah Lyndall, eldest sister of Agnes, with her only daughter Dorothy, called here with Edna, and really it seemed to me one looked about as old as the other, as Deborah seems to have changed but little since she was here before. Dorothy seems not in the least to resemble the Stewarts. She is said to be a good, helpful daughter. (T.S.R. 43. 2 P.M. 72. S.S. 66.)

Oct. 12. Tues. Received letter from Theresa and wrote to Ada. Hannah went with Rev. Sahlstrom to call on Mr. & Mrs. Siegel at Clements. Mr. Siegel has been seriously ill and is not get out of danger although better. A house was burned to the ground on Clements last night, the people just escaping with their lives, losing all else - origin of the fire unknown supposed to be crossed electric wires. House owned by Mr. Hart but tenanted by others. (T.S.R. 43. 2 P.M. 76. S.S. 66.)

Oct. 15. Fri. Celeste arrived home from the Exposition today reporting a very pleasant time. But also reporting John Willard, who is still there with Theresa, as upset in his stomach and feverish. Received a Post Card from Dean Locke - having a pleasant time. (T.S.R. 45. 2 P.M. 74. S.S. 70.)

Oct. 16. Sat. Received letter from Eunice and wrote to the children in the East. Agnes came bringing me a bouquet of most gorgeous dahlias, the handsomest I ever saw. She has a lovely flower - garden though not strong, she spends much time with it, and Eddie also. In this respect, he is unlike so many men, who think flowers beneath their notice. He spades and irrigates and does the drudgery. (T.S.R. 48. 2 P.M. 79. S.S. 72.)

Oct. 17. Sabbath. This was State S. School Day and Rev. Sahlstrom had special program and hoped for large attendance but was disappointed. But something very sad called many away from the service. Mrs. Cardozo, mother of our school principal, was taken suddenly very ill last night, and after suffering dreadfully, died at about four o'clock this morning. Dr. Barbour, who was called, arrived about