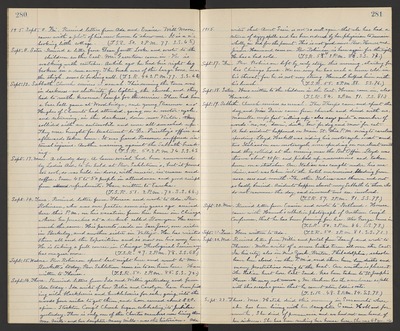 Sept. 12. Sabbath. Church services as usual. This evening the town was in darkness - no electricity for lighting the church, and they had to with kerosene lamps for the service. There had been a base ball game at Woodbridge, and young Reasoner and Hughes of Clements had attended, going on a motor-cycle, and returning, on the darkness, down near Victor, they collided with an automobile and were all smashed up. They were brought for treatment to Dr. Priestley's office and afterwards taken home. It was feared Reasoner suffered internal injuries. Another warning against the Sabbath-breaking. (T.S.R. 50. 2 P.M. 76. S.S. 65.)

Sept. 14. Tues. Received letter from Theresa and wrote to Ada. Rev. Robinson, who was our pastor some six years ago arrived here this P.M. on his vacation from his home in Chicago where he preaches at a suburb called Berwyn. He seems much the same. His parents reside in San Jose, one sister in Berkeley, and another sister in Vallejo. He has visited them all and the Exposition and is now on his way home. He is taking a full course in Chicago Theological Seminary has one year more. (T.S.R. 47. 2 P.M. 78. S.S. 68.)

Sept. 16. Thurs. Received letters from Ida and Willie yesterday and from Ada today. Ida writes of how Delia and Carolyn have been picking wild blackberries and huckleberries for sale, going into the records four miles to get them, and have earned about 1820. apiece. Stockton Cong-l Church began celebrating its Jubilee yesterday. There is only one of the Charter members now living there Mrs. Mills and her daughter Mary Mills was the historian. Ada

1915. writes that Aunt Susie is not so well again - that she has had a return of dizzy spells and has been ordered by her physician to remain wholly in bed for the present. This is not good news. Bro. Horace and Jimmie Hammond came in. Rev. Robinson is here again for the night. He has a bad cold. (T.S.R. 54. 2 P.M. 86. S.S. 77.)

Sept. 19. Sabbath. Church services as usual. The Thorps came and spent the day and Miss Davis from church and dined with us. Marcella creeps fast sitting up - also says quite a number of words - "no, no," "down," drink, "bow" for dog and "Mow" for cat. A bad accident happened on Main St. this P.M. owing to careless speeding. Lloyd Haskell was riding his motorcycle went and two Italians on one motorcycle were speeding on our street south and they collided at the crossing near the Post Office. Lloyd was thrown about 20 ft. and picked up unconscious and taken home on a stretcher. One Italian was caught under his machine, and was taken into the hotel unconscious, bleeding from nose, ears and mouth. The other Italian was thrown and not so badly bruised. Accidents happen almost every Sabbath to those who do not reverence the day, and innocent ones are involved. (T.S.R. 57. 2 P.M. 91. S.S. 79.)

Sept. 20. Mon. Received letter from Eunice and wrote to Portland. Horace came with Hannah's collective photograph of Northern Cong'l Conference, that has been framing for her. Also George came in. (T.S.R. 50. 2 P.M. 86. S.S. 73.)

Sept. 22. Wed. Received letter from Willie and postal from Dean J. and wrote to Theresa. Willie writes of a severe heated term all over the East. In this city, also in New York, Boston, Philadelphia, schools have been closed in the P.M.'s and there have been deaths and many prostrations owing to the heat. Our weather is pleasant. The Italian hurt here last Sund. has been taken to St. Joseph's Home. He may not recover. Mr. Ambrose has the warehouse so full with this season's grain that he cannot store Eddie's oats. (T.S.R. 48. 2 P.M. 84. S.S. 73.)

Sept. 23. Thurs. Mrs. Hatch died this morning in Sacramento where she has been living with her daughter Carrie Holl and for months. She died of pneumonia and we had not even heard of her sickness. She has been renting her house here. She was 68 yrs. old