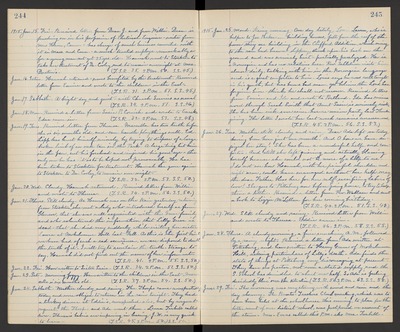 1915. Jan. 15. Fri. Received letters from Dean J. and from Willie. Dean is pushing on in his profession of Electrical Engineer - writes from New Haven, Conn. has charge of much business connected with it in Mass. and Conn. - a much trusted employe - remarkably so for a young man not get 25 yrs. old. Hannah went to Stockton to take her treatment of Dr. Cooley, and to remain overnight at Mrs. Dustin's. (T.S.R. 35. 2 P.M. 50. S.S. 45.)

Jan. 19. Tues. Received letter from Theresa. Marcella has two teeth before she is six months old, and can handle playthings well. Ed. Lipp has hurt himself seriously by trying to dispose of a large broken limb of an oak tree in the Park. A large twig hit him in the face, cut his forehead and injured his good eye - the only one he has - it is to be hoped not permanently. He has been taken to Stockton for treatment. Hannah has gone again to Stockton to Dr. Cooley to remain over night. (T.S.R. 32. 2 P.M. 53. S.S. 50.)

Jan. 21. Thurs. Still cloudy. As Hannah was on the train yesterday returning from Stockton, she met a lady who introduced herself as from Glencoe, that she was well acquainted with the Greve family and who volunteered the information that Lilly Greve is dead - that she died very suddenly while visiting her sister Laura at Mokelumne Hill last Fall. As this is the first hint we have had of each a sad occurrence, we are disposed to doubt the truth of it. I will try to ascertain the truth. Strange to say, Hannah did not find out the name of her informant. (T.S.R. 41. 2 P.M. 55. S.S. 50.)

Jan. 24. Sabbath. Weather cloudy and rainy. The Thorps came unexpectedly today and were obliged to return in the rain tonight. They had a turkey dinner at Eddie's, unexpected also, but by urgent request, the Thorp's and Ada went there. Leona Tarbell called here. Theresa's babies are improving in learning. J.W. is very quick to learn. (T.S.R. 45. 2 P.M. 54.)S.S.54.)

1915. Jan. 25. Mond. Rainy morning. One day lately, Louis Larsen, who is helper to Joe Parker in building houses, fell from the roof of the house they are building in the Clifford Addition, which owing to the rain had become slippery, struck upon his back on the ground and was seriously hurt - partially paralyzed. He is a Norwegian and has no relatives here. Rev. Sahlstrom visits him almost daily, talking with him in the Norwegian language and is a great comforter to him. Louis says her was well taught in his youth, but has been a bad man, yet believes the Lord has forgiven him - think he shall not recover. Received letters from Eunice and Ida and wrote to Portland. Ida has receives word through Sarah Smith that Aunt Susie is seriously sick. She has been sick ever since her re-union party last Thanksgiving. The letter I wrote her last week remains unanswered. (T.S.R. 45. 2 P.M. 56. S.S. 53.)

Jan. 26. Tues. Weather still cloudy and rainy. Dear Ada left us today having been here just one month. And O how we have enjoyed her stay! She has been a wonderful help and comforter. And still she left grieving and actually blaming herself because she could not be more of a help to us. I do not see how Hannah, with her painful shoulder and right arm, could have managed without her help. May the dear Father bless her for her self-sacrificing labors of love! She goes to Pittsburg now before giving home, to try to help them a little. Received a letter from Rev. Wallace and sent a book to Lizzie McLellan for her coming birthday. (T.S.R. 40 .2 P.M. 51. S.S. 48.)

Jan. 28. Thurs. A cloudy morning, a fine sunshiny A.M. followed by a rainy night. Received a letter from Ada written at Pittsburg, and have written to Harry Greve and Mokelumne Hill, asking particulars of Lilly's death. Ada finds the state of things at Pittsburg very discouraging at present. They have no pastor, not even a stated supply, and the S. School has dwindled to about one-half. So Ada is feeling decidedly "blue" over the situation (T.S.R. 50. 2 P.M. 63. S.S. 58.)

Jan. 29. Fri. The morning was very stormy with wind and rain and the day showery. The Parents-Teachers Club meeting, which was to have been held at the school house this evening, to plan for the betterment of our district school, was postponed on account of the storm. Mrs. Evans called this P.M. also Mrs. Tarbell.