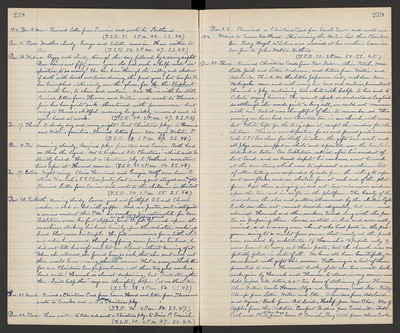 Dec. 16. Wednes. Foggy and cloudy through the day followed by a rainy night. Dear Ada is now fifty-seven years old and such a help and inspiration to so many! She has been "through the valley and shadow of death" with loud ones twice during the past year, but her firth has triumphed victoriously over the gloom, for He, the Shepherd - was with her, to cheer and sustain. And He is with her still. Received letters from Theresa and Willie and wrote to Theresa. Jim has been quite sick - threatened with pneumonia - but owing to Theresa's skillful nursing he quickly recovered and is again hard at work. (T.S.R. 40. 2 P.M. 47. S.S. 43.)

Dec. 20. Sabbath. Morning cloudy. Laura, good and faithful S.S. and Church worker, is sick in bed with grippe. And our pastor met with quite a serious accident this P.M. In cranking his automobile for Mrs. Sahlstrom's use, his feet slipped, owing to the slipping ground and he fell forward upon the machine, striking his head heavily upon the radiator, making a hard blow near his temple. He fell unconscious for a little while and when he recovered, though suffering severe pain in his hand, he did not tell his wife and let her depart without knowing of it. When she returned, she found him so sick, that she sent word out there would be no evening church service. What a sorry outlook this for our Christmas tree preparations, with those two good workers lard aside! Hannah is almost despairing, but "I will strengthen thee - I will help thee" - says our Almighty Helper, Let us trust Him. (T.S.R. 38. 2 P.M. 50. S.S. 47.)

Dec. 23. Received a Christmas Card from Sarah Smith and wrote one.

Dec. 24. Thurs. Received Christmas Cards from Rev. Kidder, Alice Petch, Mrs. Lilla Jack and Lottie Anderson, and letters from Willie and Adelaide. This A.M. the little Japanese lady next door - Mrs. Wakizake - came and with many low bows and courtesies, presented to Hannah a pkg. containing two white silk hdkfs. to her and to Celeste, saying "kismas". She cannot speak or understand English so although she made quite a long call, we could not converse with her. But it was thoughtful of them to remember us. This evening we have had our Christmas tree in our church, with none but "White Gifts for the King" upon it, except the candies for the children. This is a new departure for us and proved quite a success. Each S.S. Class chose for itself to whom the gifts were sent, and all pkgs. were wrapped in white and deposited near the tree, to be distributed later. Rev. Sahlstrom rallied after his accident of last Sund. and on Mond. despite his weakness, went to work at the decorations, which were to represent a snowstorm. Bits of cotton batting were suspended by cards from the ceiling to represent snow flakes, and an electric fan and each and of the platform kept them swinging in and out. Snow also was in evidence upon the tree and in drifts on the platform. The beauty of the decorations, the star and mottoes, illumined by the electric lights I, who saw them not, cannot describe adequately, but were much admired. Hannah and other workers, toiled long with the pastor in preparing them. Laura is still in bed and was sadly missed, and so many were absent who had parts on the program, owing to a scarlet fever scare, that nearly all the parts were rendered by substitutes. Of Hannah's 14 pupils only 4 were present to carry out their parts, but the church was comfortably filled, in spite of all. We have all been bountifully remembered with gifts this season. Following is a list of those presented to me! The most bulky of all were two small book racks, given by Hannah and Theresa, to stand in my corner and hold papers, bill, letters, D.C. - Six boxes of stationery from Theresa, Alice, Nellie, Uncle Horace, Olga and Georgiana, and Ida - Postage Stamps from Lottie, Willie and Etta, Calendars from Adelaide and Agnes, - Book from Adelaide, Hdkf. from Mrs. Ober, Box of Apples from the Websters, "Comfort Powders" from Eunice W. - Table Coth and Photo of her boys from Susie P. Cornish, Tray Cloth from Alma Cooke