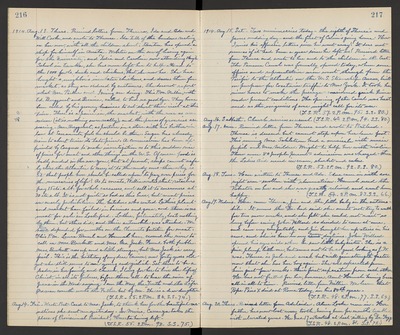 1914. Aug. 13. Thurs. Received letters from Theresa, Ida and Ada and will Cooke, and wrote to Theresa. Ida tells of the burdens resting on her now, with all the children absent. Benton has opened a shop for himself in Arcata. Webster on the eve of having again for the University, and Delia and Caroline now attending High School in Eureka, she has none left her to help attend to the 1000 fowls, ducks and chickens, that she now has. She has bought a neighbor's incubator chickens, and dresses them for market, as they are ordered by customers. She does not report what Mr. Parker and Irving are doing. This P.M. Nellie, with Ed. Bergquest and Bernice, called to bid us goodbye. They have been called by his grocery business to cut short their visit at this time. There is a panic in the market, with the war as an excuse (it is nothing more really), and the prices of groceries are soaring. Mr. Bergquest, as partner in a store with his brother-in-law at Sacramento, feels he should be there. Sugar has already risin to about twice its tale price. A commission has been appointed by Congress to make investigation as to this sudden rise of prices for meat and other things in the U.S. Ofcourse food is badly needed in the war zone, but at present, ships cannot safely cross the atlantic to carry it to the needy ones - then why is it that people here should be called upon to pay war prices for the necessaries of life? As to meats, Willie Writes that retailers pay 15 cts. a lb. for whole carcasses, and sell it to consumers at 30 cts, a lb. It is not quite so bad as this here, but meat prices are nearly prohibitive. The butchers who rented Luther's plant and market have failed in business and gone, and there is no meat for sale in Lockeford. Luther, fortunately, lost nothing by them, but others did, and their automobile was attached. We have depended for months on the Clements butcher for meat. This P.M. Laura Bruml and Hannah have crossed the river to call on Mrs. Burkett and Mrs. Geo. Jack. Found both feeble. Mrs. Burkett was up and a little stronger, but Mrs. Jack is very frail. This is the birthday of my dear Eunice, now forty years old yet she still seems to me young and girlish. Set there to be a leader in her family and church, I long for her to live the life of Christ, in all its fullness, before them all to hear the voice of Jesus in the Word saying "I am the Way, the Truth and the Life. No man cometh unto the Father but by Me." she is a dear daughter. (T.S.R. 55. 2 P.M. 86. S.S. 74.)

1914. Aug. 15. Sat. Two anniversaries today - the eight of Theresa's and James wedding day - and the first of Calvin's going home. How I miss his effusive letters since he went away! It does not seem as if it had been a year since he left us! Received letter from Theresa and wrote to her and to the children in the East. The Panama Canal was formally opened today, when some officers and representative men went through from the Pacific to the Atlantic on the U.S. Steamship Ancon, built on purpose for Coastwise traffic to New York. It took her nine hours to make the passage - considered quick time under present conditions. The opening of the Canal was hastened as the exigencies of war might call for its use. (T.S.R. 57. 2 P.M. 95. S.S. 80.)

Aug. 17. Mon. Received letter from Theresa and wrote to Portland. Theresa is dressed but cannot step upon her lame foot. This evening Mrs. Sahlstrom had a musical with music pupils and Mrs. Mildred Wright to help her with violin. These were 80 people present - admission was changed - then the Ladies Aid served ice cream, sherbet and cakes. (T.S.R. 52. 2 P.M. 92. S.S. 80.)

Aug. 19. Wednes. Have came Theresa, Jim and the little baby in the automobile. It seems the Dr. had said she must not try to walk for two more weeks, and she felt she could not wait so long before seeing John Willard so decided to come at once, and came very comfortably, and Jim brought her up stairs in his arms, and she is here in my room day times. John Willard opened his eyes wide when he saw "little baby sister." She is a fine, plump little one, but seems not to be so good looking as J.W. was. Theresa is pale and weak but will gain strength faster now that she has her boy again. She was separated from him just four weeks - their first separation from each other. He has not fretted for her, however, aunt Hannah having been all in all to him. Received letter from Willie. We learn that Pope Pius X died at Rome today, in his 80th year. (T.S.R. 48. 2 P.M. 77. S.S. 64.)