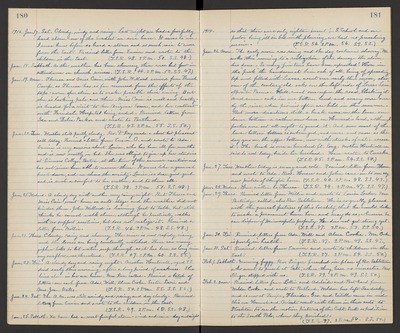 Jan. 19. Mon. Theresa and Miss Cain, with John Willard arrived from French Camp, as Theresa has so far recovered from the effects of the tape-worm operation as to make possible their coming. But she is looking pale and thin. Miss Cain is well and hearty - is headed for a visit to her Arizona home, and her contract with Ferndale Hospital being ended. Received letters from Ida and Delia Parker and wrote to Portland. (T.S.R. 43. 2 P.M. 55. S.S. 50.)

Jan. 20. Tues. Weather still partly cloudy. Rev. DeKay made a short but pleasant call today. Received a letter from Eunice C. and wrote to Ada. Eunice is very anxious about Louisa, who has been ill for months and is now mostly in bed. She was obliged to give up her studies at Simmons College, Boston, at the time of the summer vacation and has not since been able to resume there. It seems like a general break-down, and we share the anxiety. Louise is a dear, good girl and is such a comfort to her mother, and to them all. (T.S.R. 38. 2 P.M. 51. S.S. 48.)

Jan. 21. Wednes. A cloudy day with another very rainy night. But Theresa and Miss Cain went home on auto-stage and the weather did not kinder them. John Willard is learning fast to talk, but still thinks he cannot walk alone, although he practically walks with no support sometimes, but does not realize it. Received a letter from Willie. (T.S.R. 46. 2 P.M. 48. S.S. 48.)

Jan. 22. Thurs. Cloudy rainy and showery. The river is now rapidly using and the levers are being constantly watched. There are many gopher-holes to let water up through, as it has been so long since any overflow was threatened. (T.S.R. 47. 2 P.M. 60. S.S. 55.)

Jan. 25. Sabbath. We have had a most fearful storm-wind and rain-day and night

Jan. 26. Mon. The early morn was rainy and the day continued showery. We woke this morning to a realization of the damage the storm has done, So many fine trees have been reprooted! Here in the "park" the handsomest live oak of all, being of spreading top and filled with leaves, went out early this morn, also one of the century old oaks on the left side of "Lovers Lane" opposite Proners Hill, went over upon the road, blocking it. And seven oaks in our bottom land and many more over by the river, when picnics often are held in the summer. But more disastrous still, a break came in the lever on lower bottom - a rather new lever on Howard's land, although parties were out all night to guard it. And now most of the lower bottom is submerged, and more and more as the day goes on, the upper bottom, now with streaks of water across it, The break is over a hundred ft. long. Mother Hartwell we laid to rest today, beside her husband. Have written to Eureka (T.S.R. 45. 2 P.M. 54. S.S. 50.)

Jan. 29. Thurs. Received letter from Willie and wrote to Louise Locke. Mrs. Partridge called, also Rev. Sahlstrom. He is so greatly pleased with the general features of this locality that he would like to make a permanent home here and may do so, whenever he can dispose of Minneapolis property. He does not get strong yet. (T.S.R. 37. 2 P.M. 53. S.S. 50.)

Feb. 2. Mon. Received letters from Lottie and Adelaide and Post Card from Weldon Cooke and wrote to Portland. Weldon has left Sandusky and is now at Tampa, Florida. Geo. and Estelle came in and This we Hannah and Celeste went with them in their auto to Stockton to see the motion pictures of the Capt. Scott expedition to the South Pole, where they perished. (T.S.R. 37. 2 P.M. 54. S.S.50.)