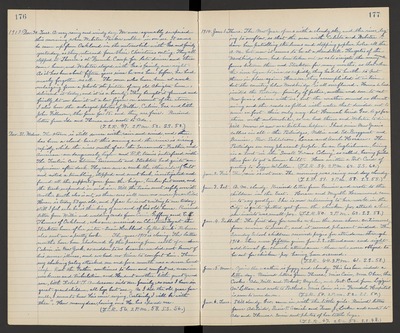 1913. Dec. 30. Tues. A very rainy and windy day. We were agreeably surprised this morning when Webster Parker walked in on us. It seems he came up from Oakland in the automobile with Geo. and family yesterday, as they returned from their Christmas outing. They all stopped at Theresa's at French Camp for late dinner and then came home, and Webster stayed with Geo.'s family over night. As it has been about fifteen years since he was here before, he had nearly forgotten us all. The men who have been at work enlarging from a photo the picture of my old Obington home, delivered it today, and it is a beauty. They brought it framed and finally let me have it at a low figure on account of the storm I also have the enlarged photos of Willie, Calvin, Geo. and little John Fillmore, the four for $15. and they are fine. Received letters from Ida and Theresa and wrote to Ada. (T.S.R. 47. 2 P.M. 52. S.S. 52.)

Dec. 31. Wednes. The storm is still severe with rain and wind, and there has been a cloud-burst this evening and the river is rising rapidly, while the river north of us, the Sacramento, Feather and American are dangerously high - and R.R. trains interfered with. The Traction Cars between Sacramento and Stockton had quite an experience after dark. They ran over a creek the other side of Galt and noted a trembling, stopped and went back, investigated and found all the supports gone from the bridge, twelve feet across, and the track suspended in said air. Still the train went safely over it. Another trestle also is out, so those cars will run no more for a while. Horace is today 53 yrs. old, and I fear he is not writing to me today still I feel sure he is thinking of me and of his old home. Received letter from Willie and wedding cards from Carrie Geffroy and E.J. Thomas of Oakland, who were married on Christmas Day at the Stockton home of her sister Susie Hubbard - by Rev. Sink. Rebecca also sent one a pretty book. The year 1913 is closing. The latter months have been shadowed by the passing from earth of our dear Calvin in New York, so sudden to us because we did not know of his severe illness, and we had no time to comfort him. Then my shaking palsy attacked me and for a month was a severe handicap. But the Father continues to love and comfort us, even in weakness and tribulation, and He sent another little great grandson, little Robert T. Anderson into our family, so now I have in great grand children, all boys but me. As I bid the old year farewell, I seem to hear His voice saying, "Certainly I will be with this." How many dear, loving ones He has spared me. (T.S.R. 56. 2 P.M. 58. S.S. 56.)

1914. Jan. 1. Thurs. The New Year opens with a cloudy sky and the river trying to overflow, so that the men with Celeste and Webster P. have been patrolling the levers and stopping gopher holes all the A.M. but now it seems to be at a standstill. The gates of the Woodbridge dam, had been taken out so as to irrigate the many smell forms between there and Stockton for many months, so that when the river began to rise so rapidly, they had to hustle to put them in place again. However, they accomplished it in time but the country below Woodbridge is all overflowed. Hannah had invited the Partridge family of father, mother and son to eat New Year's dinner with us, but the weather seemed so threatening and the roads so filled with water that decided not to come on foot their only way - but Hannah hired Geo. to go for them with automobile, so we had them and Webster to dinner. Will Moore is now our kitchen helper. I had nine New Year's callers in all - the Partridges, Nellie and Ed. Bergquest and Bernice, Rev. Sakletrom, Laura and Uncle Horace. The Partridges are very pleasant people, he an Englishman, living in a tent in the "Small Farms Colony," so called, having failed thus far to get a house built. Have written a Post-Card of greeting to Lizzie McLellan. (T.S.R. 54. 2 P.M. 62. S.S. 60.)

Jan. 3. Sat. A.M. cloudy. Received letter from Eunice and wrote to the children in the East. Horace and Myrtle Hammond came in to say goodbye. She is now returning to her work in the City - is quite spotted yet from the chicken-pox attack which she insists was small-pox. (T.S.R. 50. 2 P.M. 62. S.S. 58.)

Jan. 4. Sabbath. The first day for weeks when the sun shone continuously from sunrise to sunset, and it seemed pleasant indeed. The Sunday School children received prize for attendance through 1913 - there were fifteen given for S.S. attendance and eight additional for church attendance - those who were obliged to be out for chicken-pox having been excused. (T.S.R. 44. 2 P.M. 61. S.S. 58.)

Jan. 5. Mon. Again the weather is foggy and cloudy. This has been indeed a letter day. Received letters from Theresa, Miss Cain, Mrs. Ober, the Cookes - Ada, Will and Robert, Myrtle, and Post-Card from Lizzie McLellan, and wrote to Portland. Miss Cain is in Ferndale Hospital is soon to come down. (T.S.R. 50. 2 P.M. 52. S.S. 50.)