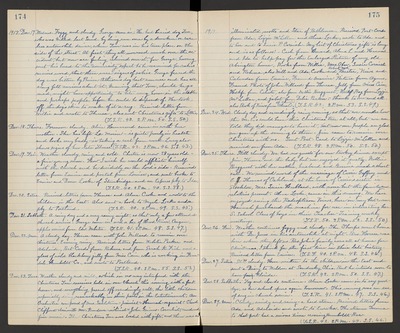 1913. Dec. 17. Wednes. Foggy and cloudy. George came in. He had buried dog Tom, who was killed last Sund. by being run over by a drunken or care less automobile driver, when Tom was in his tree place on the ride of the street. At first they all mourned much over the accident, but now are feeling relieved over it, for George, having sent his head to the University expert to be examined for rabies receives word that these were signs of rabies. George feared the dog was bitten by Prince Athearn's dog last summer and has all along felt anxious about it, knowing that Tom, should he go mad, might have opportunity to bite every horse in the stable and perhaps people, before he could be disposed of. He took off the dog's skin to make of it a rug. Received letter from Willie and wrote to Theresa, also sent Christmas gifts to Lottie. (T.S.R. 40. 2 P.M. 50. S.S. 50.)

Dec. 19. Fri. Weather cloudy, rainy and cold. Chester is now 28 years old a fine young man. How I wish he would affiliate himself with the church and be decidedly on the Lord's side. Received letter from Eunice and postal from Louise, and sent books to Eunice and Dean Locke of Sturbridge and an Express pkg. to Ida. (T.S.R. 40. 2 P.M. 40. S.S. 38.)

Dec. 22. Mon. A cloudy day. Theresa came with John Willard to remain over Christmas. Evening rainy. Received letters from Webster Parker and Adelaide, Post-Cards from Rebecca and from Sarah K. Fish and a glass of wild blackberry jelly from Miss Cain who is working in Ferndale, Humboldt Co., and wrote to Portland. (T.S.R. 40. 2 P.M. 55. S.S. 51.)

Dec. 23. Tues. Weather cloudy and mild, which in no way interfered with the Christmas Tree exercises held in our Church this evening, with a full house, and everything passed off exceedingly well, the little children especially doing remarkably in their parts in the Entertainment. An Orchestra composed of Mrs. Sahlstrom - pianist - Hannah - organist - Claude Clifford - clarinet - Mr. Knudsen - violinist - John Grimes - Cornetist, rendered fine music. The Christmas Tree was loaded with gifts, and there was an

1913. illuminated motto and Star of Bethlehem. Received Post-Cards from Ada, Lizzie McLellan and Alma Locke, wrote to Ada and to her and to Susie P. Cornish. My list of Christmas gifts is long and is as follows! - Cash from Howard, Alma L. and Hannah and Ida to help pay for the Enlarged Picture of my old Abington home, Books from Willie, Mrs. Ober, Susie Cornish and Rebecca, also Will and Ada Cooke and Robert and Hester, Views and Calendar from Eunice, Framed Marine Pictures from Agnes, Framed Photo of John Willard from Theresa, Jelly from Miss Cain, Hdkfs. from Celeste, also from Nellie Bergquest, Hdkf-Bag from Lizzie McLellan, and Jabot from Delia Parker. thanks to one and all. also Book of Views from Alma C. of Hawaii. (T.S.R. 42. 2 P.M. S.S. 49.)

Dec. 24. Wed. Cloudy day and exceedingly rainy evening, so that we wonder how the M. E.'s could have their Christmas tree at all, but we are told they did manage to have it, but now our people are glad we gave up the evening to them. Jim came to remain over Christmas with us. Sent Post-Card to Lizzie McLellan and received one from Ada. (T.S.R. 48. 2 P.M. 50. S.S. 50.)

Dec. 25. Thurs. Still cloudy. We had no guests for our turkey dinner except Jim, Theresa and the baby, but we enjoyed it greatly. Nellie Bergquest with her mother, husband and Bernice made a short call. We received word of the marriage of Carrie Geffroy and E.J. Thomas of Oakland, at the home of Carrie's sister in Stockton, Mrs. Susie Hubbard, with none but the family and relatives present. Alma Locke came in this evening. We have enjoyed seeing the Radiopticon Views, here in my bedroom. Hannah purchased the machine for use in interesting her S. School Class of boys in their Teacher-Training weekly meetings. (T.S.R. 50. 2 P.M. 52. S.S. 50.)

Dec. 26. Fri. Weather continues foggy and cloudy. The Thorps went home with Dr. Jones in his automobile at night. Bro. Horace was here when they left us. Bro. John's family were all at home for Christmas, I think for the first time in their late history. Received letter from Eunice. (T.S.R. 40. 2 P.M. 48. S.S. 46.)