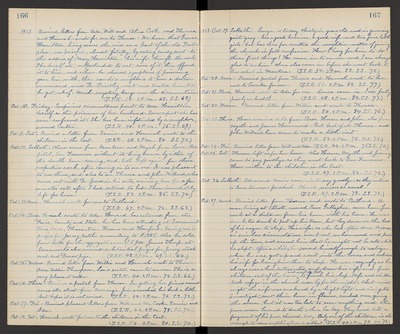 1913. Received letters from Ada, Will and Alma Cooke and Theresa and Hannah wrote for me to Theresa. We learn that Grover Hamilton, living across the river on a part of the old Foster place, was poisoned, almost fatally, by eating candy sent to the address of "Mary Hamilton" - his wife, through the mails. She herself ate, or pretended to eat, some of it, then offered it to him, and where he showed symptoms of poisoning, gave him milk, then ran to a neighbor's to have a doctor summoned, and Dr. Priestly went and treated him till he got relief. Much mystery hangs over the circumstances. (T.S.R. 50. 2 P.M. 68. S.S. 63.)

Oct. 10. Friday. Suspicious circumstances point to Mrs. Hamilton herself as the poisoner of her husband. Some report she has even confessed it. She has been infatuated by a neighbor, named Coulter. (T.S.R. 40. 2 P.M. 75. S.S. 69.)

Oct. 12. Sabbath. Alma came from Manteca and Myrle from Lane Hospital, San Francisco, without its being known by either of the double home-coming, and both left again for their respective work, after coming in to see me. It was pleasant to see them, and also to see Theresa and John Willard, who came out with Dr. Jones in his auto, arriving here for a few minutes call after I had retired to bed. Then immediately left for home. (T.S.R. 53. 2 P.M. 85. S.S. 74.)

Oct. 14. Tues. Hannah wrote to Ada. Howard has returned from the Fairs, County and State, he has been attending at Sacramento. Reno, Nev., Pleasanton, Fresno and Hanford, having rec'd prizes for Jersey cattle amounting to $1385. Also he sold four bulls for the aggregate sum of $900. James Thorp at Sacramento also received substantial prizes for Jersey stock and red Duroc pigs. (T.S.R. 43. 2 P.M. 69. S.S. 64.)

1913. Oct. 19. Sabbath. George is today thirtysix years old and is growing quite gray, has a good business, a good wife and two fine little girls, but has there far omitted the weightier matter of joining the church in full confession. How I long for him to do these "first things! he came in to see me and I am always glad to see him. Alma also came in before she went back to her school in Manteca. (T.S.R. 52. 2 P.M. 83. S.S. 78.)

Oct. 27. Mond. Received letter from Theresa and wrote to Portland. A man living at Elliott, named Enos Gallagher, came home from work at a distance from his home, with his team. He was drunk, too drunk to put up his team, but lay down in the bed of his wagon to sleep. His wife, as she had often done before, in similar circumstances, went out, unharnessed and put up the team, and covered him that he might not be cold while he slept. After a while, he roused himself enough to realize where he was, got up and went into the house and scolded his wife for leaving him there to sleep. He was very ugly as he always was when intoxicated and drove his wife and five children out of the house and went to bed to finish his sleep. Wife and children took refuge in the church nearby for the night. About midnight the wife was awakened by a bright light and rising to investigate, saw their home in flames, rushed over, giving the alarm, but it was too late to save anything, and the poor man burned to death where he lay. They saved but a fragment of his poor, charred body. Only one of the children is old enough to earn anything towards support. (T.S.R. 44. 2 P.M. 78. S.S. 71.)