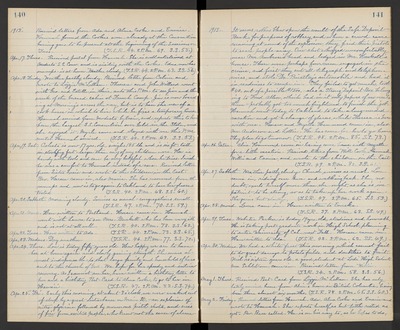 1913. Received letters from Ada and Alma Cooke and Eunice. Hannah found the Cookes were already at the Convention having gone to be present at the beginning of the Sessions on Tues. (T.S.R. 44. 2 P.M. 69. S.S. 55.)

Apr. 18. Friday. Weather partly cloudy. Received letter from Calvin and wrote to Lizzie McLellan. Theresa and John Willard went with Geo. and Estelle in their auto this P.M. to see Jim and the wreck of the burned cabin at French Camp. Jim is now boarding at Mooring's across the way, but is to have the use of a cook-house in which to live while he fixes a temporary house. Hannah arrived from Modesto by train, and reports this to have been the largest S.S. Convention ever held in the State, and she enjoyed it. Myrle came and stayed with me this P.M. until Hannah arrived. (T.S.R. 44. 2 P.M. 63. S.S. 53)

Apr. 19. Sat. Celeste is now 17 yrs. old, weighs 185 lbs. and is six ft. tall in stocking feet - large than any of my children were. He is handy with tools and can be very helpful when he tries. I wish he was a comfort to Hannah instead of a care. Received letter from Sister Susie and wrote to the children in the East. Bro. Horace came in, also Marie. She has recovered from the mumps and now is to go again to Oakland to have her glasses tested (T.S.R. 40. 2 P.M. 68. S.S. 60.)

Apr. 24. Thurs. Lou is today fifty years old. How happy we are to have her at home again and slowly gaining strength. She seems almost indispensable to that large family and household of hers and to the church for God. We hope for her speedy and entire recovery. As I cannot see her, have written a birthday letter to her and a birthday Post-Card to Alma Cooke, to go to her in Hawaii. (T.S.R. 47. 2 P.M. 82. S.S. 74.)

Apr. 25. Fri. Early this morning, at about 3 o'clock, we were awaked out of sleep by a great disturbance on Main St. - an explosion of nitro-glycerine followed by numerous pistol shots, and cries of fire from excited people, who knew not the cause of alarm.

1913. It seems robbers blew open the vault of the Safe Deposit Bank, for purposes of robbery, and when a crowd came running at sound of the explosion, they fired their pistols to scare people away. One shot whizzed uncomfortably near Mr. Ambrosio head and lodged in Mr. Haskell's house. There were perhaps four men engaged in the crime, and first they cut all telegraph and telephone wires, and stoles Dr. Priestley's automobile and had it in readiness to escape in. They failed to get much, took $40. out of a possible $1500. - also a Strong Deposit Box belonging to Fred Allen, which had in it only papers of no use to them - probably got too much frightened to finish the job. Hannah went today to Oakland to take a long-needed vacation and get a change of glasses, while Theresa is here with me. Horace and Myrtle Hammond came in, also Mr. Anderson and Lottie. He has come for her to go home. They plan to go tomorrow. (T.S.R. 48. 2 P.M. 85. S.S. 73.)

Apr. 30. Wednes. We had a white frost this morning which cannot fail to do great damage to potato fields, and doubtless to fruit. Niel is sixteen years old, a good student at Lodi High School. Mrs. Sahlstrom came in. Received letter from Willie. (T.S.R. 34. 2 P.M. 58. S.S. 56.)

May 2. Friday. Received letters from Hannah, Ada, Alma Cooke and Eunice and wrote to Hannah. She reports herself as but little rested as yet. Rev. Burr called. He is on his way to, as her hopes to do,