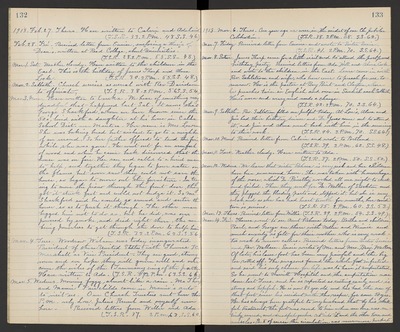 Mar. 3. Mon. Have written to Eureka. We hear of something very dreadful that happened last Sat. It seems that George Shackford, whom we have known since the '50's, lived with a daughter at his home in Calla School Dist. near Manteca. Her name is Mrs. Lawrence She was baking bread but wished to go to a neighbor of an errand. So her father offered to tend the fire while she was gone. He went out for an armful of wood and when he came back discovered that the house was on fire. Her ran and called to a hired man to help, and together they began to pour water on the flames but soon saw they could not save the house, so began to move out the furniture. In trying to move the piano through the front door, they got it stuck fast could not bridge it. So Mr. Shackford said he would go around and enter the house, so as to push it through. The other man begged him not to do so, but he did, was over powered by smoke, and died right there, the man being powerless to get through the door help him. (T.S.R. 32. 2 P.M. 62. S.S. 56.)

Mar. 4. Tues. Woodrow Wilson was today inaugurated President of these United States, with Thomas R. Marshall as Vice President. They are good, strong men and we hope they will govern well and overcome the wiles of the Tammany wing of the party. Have written to Ada. (T.S.R. 39. 2 P.M. 63. S.S. 60.)

Mar. 5. Wednes. Morning foggy, almost like a rain. Ma Thorp and Mamie Fairchilds came in Mamie's auto to visit us. Our Church Trustees met here this P.M. only Lou, Julius Bruml and myself were here. Received letters from Willie and Ada. (T.S.R. 37. 2 P.M. 63. S.S. 60.)

Mar. 8. Satur. James Thorp came for a little visit and to attend the postponed birthday party. Received letters from Ada, Will and Alma Cooke and wrote to the children in the East. Laura came in with Rev. Sahlstrom and wife, who have come to preach for us tomorrow. He is the pastor at Bay Point and Clayton, where he preaches twice in English and once in Swedish each Sabbath. He is worn and weary and needs a change. (T.S.R. 42. 2 P.M. 70. S.S. 64.)

Mar. 12. Wednes. We learn that sister Rebecca is very sick and her children have been summoned home. She was taken with hemorrhage of the nose, which Dr. Priestley worked all one night to check and failed. Then they sent for Dr. Walker of Stockton and they plugged the bleeding parts and stopped it, but she is very weak, and as she has had heart trouble for months, her condition is serious. (T.S.R. 35. 2 P.M. 60. S.S. 53.)

Mar. 14. Fri. Theresa went to see Aunt Rebecca today. Bertha and children Pearl, and George are there with Nellie and Winnie and much anxiety is felt for their mother who is very weak - too weak to receive callers. Received letters from Sister Susie and Rev. Wallace. Susie writes of Mr. and Mrs. Benj. Wallace Of late, his lame foot has been very painful and the big toe rotted off. The surgeons found the whole foot infected and said his only chance for life was to have it amputated. So he went to Merritt Hospital and the amputation was done last Tues. and he is reported as resting easily and is strong and hopeful. He is now 81 yrs, old and has had the use of that foot since his accident with the reaper, for some 50 yrs. He has always been grateful to my husband that by his skillful treatment, the foot was saved to him when one bone was entirely severed, and dreadful gashes cut into it and the other bone and muscles. But of course the circulation was never more perfect.