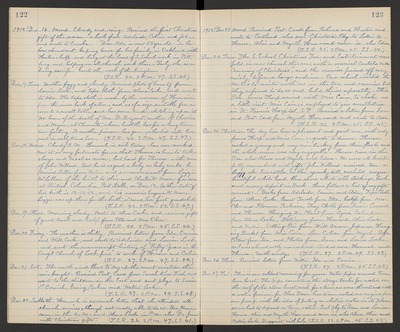 1912. Dec. 16. Mond. Cloudy and rainy. Received the first Christmas gift of the season - a book from Adelaide, Calvin and John and wrote to Eureka. Dear Ada is now 55 yrs. old - in labors abundant, keeping house for her family in Oakland with Hester's help, and being at the head of S.School work in Pittsburg, and helping in all church work there. Truly, she is a "living sacrifice" unto the work of the Kingdom. (T.S.R. 40. 2 P.M. 47. S.S. 45.)

Dec. 17. Tues. Weather and cloudy. Received photo of herself from Louise Locke, and "tapa cloth" from Alma Cooke, and wrote to Ada. The tapa cloth is made by the women of Hawaii from the inner bark of a tree, and is of a size suitable for a cover to a small table, and has some crude sketching upon it. We learn of the death of Mrs. B. Bryant, mother of Charles and Wayne, at Clements, whose health has for a long time been failing. So another pioneer has gone, who did well her part in early times here. (T.S.R. 40. 2 P.M. 47. S.S. 47.)

Dec. 18. Wednes. Cloudy A.M. Hannah is sick today - has over-worked. Now it is very fortunate for us that Theresa is here to take charge and to act as nurse, but hard for Theresa, with care of John Willard. But he is as good a baby as baby could be Received letter from Willie and announcement from Lizzie McLellan of the birth to Alice and Chester W. Moore of a son at British Columbia, Port Kells, on Dec, 12. So the date of his birth is 12-12'12, and his name is Eugene W. Moore. Lizzie was up there for the birth, it seems, her first grandchild (T.S.R. 42. 2 P.M. 51. S.S. 47.)

Dec. 20. Friday. The weather is chilly. Received letters from Ida, Eunice and Will Cooke, and wrote to Adelaide and Louise Locke and sent the manuscript history of "Fifty Years in the Cong'l Church of Lockeford" to each of Horace and Calvin. (T.S.R. 27. 2 P.M. 47. S.S. 44.)

Dec. 21. Sat. The north wind blows to dry up the scant moisture the rain brought. Received Post-Card from Sarah Kerr Fish and wrote to the children in the East and sent pkgs. to Susie P. Cornish, Irving Parker and Walter Locke. (T.S.R. 27. 2 P.M. 44. S.S. 43.)

Dec. 24. Tues. The S. School Christmas Tree and Entertainment were held in our church this eve, with a musical Cantata called "Crowning of Christmas," and the exercises passed off very nicely, before a large audience. Our school invited the M.E.'s to unite with us in the tree and exercises but they refused to do so and held theirs separately. This P.M. James Thorp arrived with Miss Cain, to make us a little visit. Miss Cain is employed to give anesthetics in St. Francis Hospital, S.F. Received a letter from Irene and Post-Card from Myrtle Hammond and wrote to Ada. (T.S.R. 26. 2 P.M. 45. S.S. 41.)

Dec. 25. Christmas. The day has been a pleasant and quite one, with only James Thorp and Miss Cain as guests to dinner. Theresa cooked a young and very nice turkey from their flock and the whole menu was very enjoyable. Horace came in this P.M. also Alma and Myrle and Edna. We were all bountifully remembered with gifts. John Willard received ten - a buggy robe, two rattles, rubber squeaky doll, crocheted sacque, beautiful white hood, blue shoes, white silk stockings, book and money deposit in Bank. Here follows a list of my gifts received: Books from Adelaide, Eunice and Ada, Tapa Cloth from Alma Cooke, Guest Towels from Etta, hdkfs. from Mrs. Ober and Florence Parkison, Tray Cloths from Susie Cornish and Theresa, Hanging Air Plant from Agnes, Calendar from Alma Locke, Stationary from Howard, Alice Locke and Nellie, Rolling-Pin from Will Moore, Japanese Hanging Basket from Miss Cain, Lace Collar from Myrle, Sofa Pillow from Ida and Photos from Irene and Louise Locke, so I was abundantly remembered. And so were Hannah and Theresa. North windy. (T.S.R. 27. 2 P.M. 49. S.S. 43.)

Dec. 27. Fri. THis is our coldest morning for years. Water pipes around town have burst. The pipe connecting the storage tanks for water on the roof of the store burst, and for a time we were threatened with a water famine, for Chas. Bacon has disconnected our engine from our pump with the idea of putting an electric motor in its place, so we had to depend on town water. Sent pkg. to Dean and Louise. Horace, Alice and Myrtle Hammond came in, also Alma, Alice and Nellie Locke Bergquest with baby. (T.S.R. 23. 2 P.M. 45. S.S. 43.)