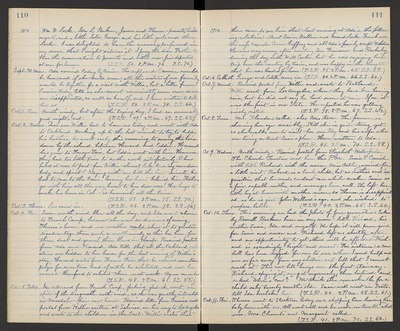 1912 Wm. W. Locke. Ida L. parker, James and Theresa parents, besides myself, and a little later George and his little girls and Alma Locke. I was delighted to have the ceremony performed in my room, that I might witness it. I pray the dear Father to bless the consecration to parents and little one. Jim departed at once for home. (T.S.R. 50. 2 P.M. 74. S.S. 70.)

Sept. 30. Mon. Ada arrived today by train. She supposed Eunice would be here and if she could come all the sister of our family would be together for a visit with Willie, but a letter from Eunice today tells us she cannot conveniently come now, so we are disappointed, as well as herself, and I have written to tell her so (T.S.R. 50. 2 P.M. 74. S.S. 64.)

Oct. 2. Wednes. Dear son Willie had to leave us today and went with Ada to Oakland. Working up to the last minute to try to help his brothers, he went early this morning to survey the line down by the island , between Howard and Eddie. Howard has gone to Fresno Fair, but Eddie went with him. However they had too little time to do the work satisfactorily. O how hard it was to part from Willie almost like tearing asunder body and spirit! Staying with me till the last minute, he had to run to the train, leaving his heart behind him. Father go with him all the way home to his dear ones! He longs to make his home in Cal. is homesick all the time. (T.S.R. 51. 2 P.M. 75. S.S. 70.)

Oct. 4. Fri. Severe north wind blew all the day, and Ida went alone to French Camp, because she was so desirous of seeing Theresa's home, and no weather could show it to greater disadvantage than such a north windy as this has been ,for there dust and gravel then blows in clouds. Received postals from Ada and Howard. Ada tells that all the Oakland relatives are bidden to her house for the last evening of Willie's stay. Howard writes from Fresno Fair that he received seventeen prizes for seventeen head of cattle he exhibited, and now he moves to Hanford to exhibit there next week. Agnes came in (T.S.R. 48. 2 P.M. 61. S.S. 55.)

Oct. 5. Satur. Ida returned from French Camp, feeling glad she went, in spite of the disagreeable north win, as she was greatly interested in Mossdale their new home. Received letter from Eunice and postal from Willie written at Salinas, on his way to Los Angeles and wrote to the children in the East. Willie writes that

1912. there came to see him that last evening at Ada's the following relatives: Aunt Susie, Wallace and Maud Locke, Frank and his wife Maude, Carrie Geffroy and all Ada's family except Weldon. He was very weary after visiting San Francisco and Berkeley during the day with Will Cooke, but he was enjoying his trip over the country by train, and was happy in the thought that he was headed for home. (T.S.R. 45. 2 P.M. 65. S.S. 59.)

Oct. 7. Mond. Received postal from Willie and wrote to Portland. Willie wrote from Los Angeles, where they have been having rain, but he did not say he had seen it rain. If so, it was the first in our State. He reported he was getting nicely rested. (T.S.R. 38. 2 P.M. 67. S.S. 62.)

Oct. 9. Wednes. North windy. Received postal from Elizabeth Westerfield The Church Trustees met here this P.M. Susie P. Cornish with little Richard with the nurse, Miss Astley, arrived for a little visit. Richard is a lovely child, but so restless and inquisitive that he needs constant care while awake. Susie is a fine, capable mother and manages him well. She left her little boy at home with another nurse, so Theresa is disappointed, as he is just John Willard's age, and she wished to compare babies. (T.S.R. 40. 2 P.M. 65. S.S. 64.)

Oct. 10. Thurs. This morning we had the photo of four generations taken by Roswell Barbour here in my room little Richard, his mother Susie, Ida and myself. We hope it will prove good for Susie and nurse and Richard left us shortly after and no opportunity to get others will be afforded Richard is exceedingly bright and smart. For instance: a cow bell has been rigged for me to use when I need half and am so far away from my electric call-bell that I cannot reach it. This cow bell hangs over the front stairway. Richard, spying it, rang it vigorously, then listened and asked "Where's cow?" We think this remarkable for a child only twenty months old. Susie will visit in Sacto. till Ida overtakes her. (T.S.R. 40. 2 P.M. 68. S.S. 61.)