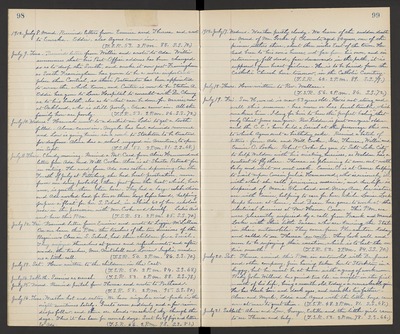 July 9. Tues. Received letter from Willie and wrote to Ada. Willie announces that his Post-Office address has been changed so as to drop the South, and make it now just Framingham as South Framingham has grown to be a more important place than Central, so their Postmaster has been appointed to serve the whole town, and Center is now to be Station A. Eddie has gone to Lane Hospital to consult with Dr. Cheney as to his health, also as to what can be done for Marie, now at Oakland, who is still poorly. Edna came in. All the family here are poorly. (T.S.R. 53. 2 P.M. 86. S.S. 72.)

July 10. Wednes. Hannah went to a dentist in Lodi to get a tooth filled. Alma came in myrle has had androids removed and Lou is going twice in a week to Stockton to be treated for deafness. Alma has a school engaged in Manteca, to open in Sept. (T.S.R. 53. 2 P.M. 81. S.S. 68.)

July 11. Thurs. Cloudy morning. Received a Post-Card from Alice Hammond and letters from Ada and Will Cooke. Alice is at Shasta Retreat for an outing. The word from Ada was rather depressing. On the Fourth of July at Pittsburg she had heat prostration, more from over doing, probably, than just from the heat, which however, is greater there than here. They had a large celebration and Ada worked hard for two or three days before hand, helping prepare a "float" for her S. School, in which 60 of her scholars rode in the procession with Mr. Cooke and herself. Ladies Aid met here this P.M. (T.S.R. 52. 2 P.M. 85. S.S. 70.)

July 12. Fri. Received letter from Eunice and wrote to Lizzie McLellan. On our lawn this P.M. the teachers of the two divisions of the Beginner's Class in S. School, had their children for a Social. They enjoyed themselves at games and refreshments, and afterwards, the teachers Mrs. Mitchell and Louise Inglis, made us a little call. (T.S.R. 50. 2 P.M. 86. S.S. 70.)

July 16. Tues. Weather hot and sultry. We have singular wind-freaks in the night sometimes lately. Gusts come suddenly and a few rain drops follow, and there are clouds mackerel sky through the days. Thus it has been for several days. Sent box of figs and letter to Ada. (T.S.R. 66. 2 P.M. 98. S.S. 81.)

1912. July 17. Wednes. Weather partly cloudy. We learn of the sudden death on Mond. of Mr. Gocke of Clements, aged 84 years, one of the pioneer settlers there, about three miles East of the town. He had been to his son's house, not far from his own, and in returning, fell dead, face downwards in the path, it is supposed, from heart failure. He is to be buried from the Catholic Church here tomorrow, in the Catholic Cemetery. (T.S.R. 62. 2 P.M. 89. S.S. 77.)

July 19. Fri. Son Howard is now 53 years old. He is not strong and well this summer has more or less bowel trouble, which weakens him. I long for him to have the "Perfect haling" that only Christ Jesus can give. Rev. Kidder is just one year older and the C.E.`s have held a Social at the parsonage this eve to which Agnes sent a birthday cake. Received a batch of letters from Ada and Will Cooke, Ida, Theresa, Willie and Eunice C. Locke. Robert Cooke has gone to Salt Lake City to help Weldon with his aviating business, as Weldon has a contract to fly there. Theresa is planning to come out with baby and visit us next week. Eunice c. is at Carver helping to wait upon Cousin Julia Hammond, who is seriously ill with what she calls "pernicious anaemia," and her life is despaired of Maria Blanchard and Mary Ann, her sisters, are with Eunice, helping to care for her, while Louise Locke keeps house at home, and Dean has gone to work at the electrical business at New Haven, Conn, This P.M. we were pleasantly surprised by a call from frank and Maude Locke with their little Susan, who are touring the State in their automobile. They came from Pleasanton today and called to see Theresa en route. They look well and seem to be enjoying their vacation, which is to last the entire month. (T.S.R. 52. 2 P.M. 84. S.S. 70.)

July 20. Sat. Theresa arrived this P.M. in automobile with Dr. Jones and other company, Jim having taken her to Stockton in a buggy, but he must be at home with a gang of workmen. Baby John Willard has gained two lbs. in weight in the first month of his life, being a month old today a remarkable gain He has black hair and dark eyes, and resembles his father. Alma and Myrtle, Eddie and Agnes with the little boys, came over at once to great them. (T.S.R. 48. 2 P.M. 81. S.S. 68.)