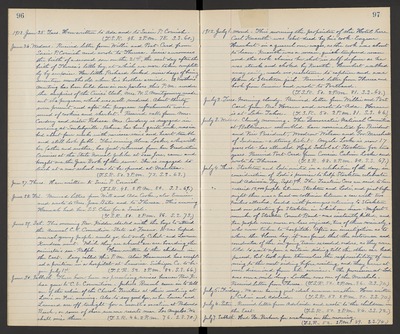 June 26. Wednes. Received letter from Willie and Post-Card from Susie P. Cornish and wrote to Theresa. Susie announces the birth of a second son on the 21st, the next day after the birth of Theresa's little boy, at which we were taken completely by surprise. Her little Richard locked nine days of being seventeen months old when his brother arrived. A Mother's Meeting has been held here in our parlors this P.M. sender the auspices of the Civics- Club, Mrs. W.S. Montgomery made out the program, which was well rendered, About thirty were present, and after the program refreshments were served of cookies and sherbet. Received calls from Mrs. Cowdery and sister Rebecca. Mrs. Cowdery is engaged in nursing at Soulsbyville. Rebecca has been quite sick, was in bed about four weeks with varicose veins and heart trouble and still looks feeble. This evening, Alma Locke, who with her father and mother, has just returned from her Graduation Exercises at the State Normal Jubilee at San Jose, came and brought me the Year Book of the same. She is engaged to teach at a new school now to be opened at Manteca. (T.S.R. 50. 2 P.M. 73. S.S. 63.)

June 29. Sat. This morning Rev. Kidder started with the boys to attend the Annual C.E. Convention State at Fresno. It was hoped several young people would go, but only Celeste and Lawrence Knudsen went. While they are absent we are boarding the minister-s son Ralph. Have written to the children in the East. Lucy called this P.M. Alice Hammond has accepted a position in a hospital at Lamoine, Sirkiyou Co. to begin July 1st. (T.S.R. 52. 2 P.M. 82. S.S. 66.)

June 30. Sabbath. There have been no preaching services because Rev. K. has gone to C.E. Convention. Julius Bruml came in to tell me of the action of the Church Trustees at their meeting at Low's on Fri. evening. Also to say goodbye, as he, Laura and Leonard are off tonight for a month's vacation at Redondo Beach, or some of those summer resorts near Los Angeles. We shall miss them. (T.S.R. 46. 2 P.M. 76. S.S. 70.)

1912. July 1. Mond. This morning the proprietor of the Hotel here Carl Knauth was shot dead by his cook. Eugene Humbert in a quarrel over wages, as the cook was about to leave. Knauth was mean, quick tempered man and the cook claims he shot in self-defense as he was struck and choked by Knauth. Hambert walked away easily, made no resistance to capture and was taken to Stockton jail. Received letter from Theresa and book from Eunice and wrote to Portland. (T.S.R. 50. 2 P.M. 81. S.S. 68.)

July 4. Thurs. Stockton and Lodi united in a celebration of the day, in consideration of Lodi's promise to help Stockton celebrate next Admission Day, Sept. 9th The Traction Cars are said to have carried 12000 people between Stockton and Lodi, and just before night there was a head on collision between a car with two trailers attached, loaded with passengers returning to Stockton and one starting for Stockton, in which one man Mcfret member of Stockton Cornet Band was instantly killed, and ten people were more or less injured, two of them seriously who were taken to hospitals. After an investigation as to where the blame lay, it was found that the motorman and conductor of the in-going train exceeded orders, as they were told to wait upon a certain siding till the other car had passed, but took upon themselves the responsibility of running to the next siding before waiting, and they were at once dismissed from the service. The procession at Lodi was over a mile long. Luther was one of the Marshals. Received letter from Theresa. (T.S.R. 52. 2 P.M. 86. S.S. 70.)