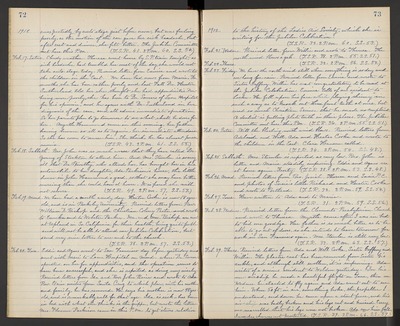 Feb. 17. Satur. Cloudy weather. Theresa want home by S.P. train tonight, as sick headache had troubled her most of the day, she would not take auto-stage today. Received letter from Eunice and wrote to the children in the East. We have bad news from Marie. For months she has been rather poorly and last Fall Dr. Hester Sutherland told her she thought she had appendicitis. Now being more poorly, she has been to Dr. Somers of Lane Hospital for his opinion, and he agrees with Dr-Sutherland in her diagnosis of the care, and all advise immediate operation. So her parents plan to go tomorrow to see what shall be done for her. Myrtle Hammond come in this evening, her father having become so ill as to require her immediate attendance So she has come to nurse him. She thinks he has almost pneumonia. (T.S.R. 43. 2 P.M. 61. S.S. 55.)

Feb. 18. Sabbath. Bro. John was so much worse that they have called Dr- Young of Stockton to attend him. And Mrs. Stemler is so very ill that Dr. Priestly, who attends her, has brought her in his automobile to her daughter, Ada Parkison's house, the little house in John Hammond's yard, so that she may have better nursing than she could have at home. It is feared she will not recover. (T.S.R. 49. 2 P.M. 57. S.S. 53.)

Feb. 19. Mond. We have had a north windy day. Hester Cooke is now 18 yrs. old, and is in Berkeley University. Received letters from Rev. William D. Bishop and the Christian Colony Pastor and wrote to Eureka and to Webster Parker. Mr. and Mrs. Bishop are now at Upland in So. California for their health, being quite feeble and will not be able to attend our Jubilee Celebration, but send very nice letters to me and to the church. (T.S.R. 38. 2 P.M. 57. S.S. 53.)

Feb. 20. Tues. Eddie and Agnes to San Francisco day before yesterday and went with Mari to Lane Hospital on Mond. where Dr. Somer operated on her for appendicitis, and the operation seems to have been successful, and she is reported as doing very nicely. Received letters from Ida and Rev. John Brier and wrote to Ada. Rev. Brier writes from Santa Cruz to which place, with his mother and family, he has removed. He says his mother is now 98 yrs old, and is remarkably well for that age. Ida is sick- has been in bed with what she thinks is the grippe, but wrote the letter. Mrs. Florence Parkison came in this P.M. to get items relation

Feb. 23. Friday. We have the north wind still when everything is so dry and we long for rain. Received letter from Eunice and wrote to Sister Geffroy. Willie has sent congratulatory to be read at the Jubilee Celebration. Eunice tells of an accident to Locke. He fell upon his face while playing "shivony" in such a way as to knock out three front teeth at once, but used so much Christian Science that he made no complaint. A dentist is putting plate teeth in their places. The Jubilee Committee met here this P.M. (T.S.R. 36. 2 P.M. 55. S.S. 51.)

Feb. 28. Wednes. Received letter from the Clements Presbyterian Church and wrote to Theresa. Myrtle came after I was in bed to bid one goodbye. Her father is so much better as to be able to go out of doors, so she intends to leave tomorrow for work in San Francisco again. Mrs. Stemler is still very low. (T.S.R. 33. 2 P.M. 63. S.S. 57.)

Feb. 29. Thurs. Received letters from Ada and Will Cooke, Sister Geffroy and Willie. The plaster cast has been removed from Sister G.'s ankle, and although still swollen, it is improving. Ada writes of a serious accident to Weldon yesterday. In his, new airship he made a beautiful flight on Tues., then on Wednes. he started to fly again and Ada went out to see him. When 50 ft. in air, something broke, the propeller I understand, and down he came upon a stout fence, and his air-ship was badly broken and his legs cut and bruised. Every one marvelled that his legs were not broken. Ada saw him fall. I wonder she was not prostrated. (T.S.R. 39. 2 P.M. 66. S.S. 59.)