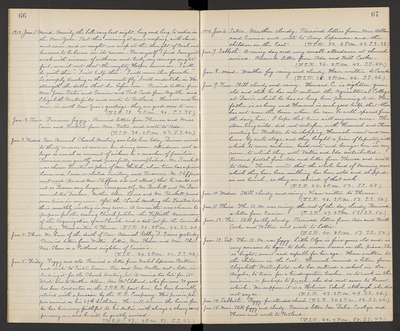 1912. Jan. 1. Mond. Merrily the bells rang last night, long and long to usher in the New Year. But this morning it comes weeping, with clouds and rain, and so might we weep at the thought of trials and burdens to be borne in its course. For myself. I find I am quite weak with increase of asthma and truly my courage might fail, were it not that the mighty Helper assures me, "I will be with thee"- "I will help thee"- I will never thee forsake- So -simply trusting as the moments fly- I will undertake in His strength the duties that hi before me. Received letters from Mrs. Joan Bates and Eunice and Post cards from Myrtle and Elizabeth Westerfield and wrote to Portland. Howard and Geo. came in with New Year's greeting - they are good sons to me. (T.S.R 38. 2 P.M. 40. S.S. 38.)

Jan. 3. Wednes. Our Annual Church Meeting was held here today. Dinner served to thirty or more at noon in our dining room. Attendance not as large as usual on account of sickness in a number of families. Business was quietly and peacefully accomplished. Mr. Burkett was chosen Trustee in place of Mrs. Hatch, whose term has expired. Laura and I were re-elected Secretary and Treasurer. Mr. Clifford sent word (he and Mrs. Clifford did not attend) that he would not act as Deacon any longer. Consequently, Mr. Burkett and Mr. Davis were elected Deacons. Mother Allen, Laura and Mr. Burkett passed some time in my room. After the Church meeting the Trustees held their monthly meeting in my room. A committee was chosen to prepare for the coming Church Jubilee- the Fiftieth Anniversary of the Organization of our Church, and a date set for the Committee Meeting. Have written to Theresa. (T.S.R. 26. 2 P.M. 44. S.S. 40.)

Jan. 5. Friday. Foggy and cold. Received a letter from Mabel Lopeman Britton and wrote to Sister Susie. Rev. and Mrs. Miller sent a letter, intending it for the Church Meeting but it arrived too late for it. Wrote also to Mother Allen. Mr. McClelland, who for some 30 years has been Conductor on the S.P.R.R. past her, has been honorably retired with a pension by the R.R. Company. His pension papers arrive on his 69th birthday. He well deserves the honor for he has been very faithful to his duties, with always a cheery word for everone, and he will be greatly missed. (T.S.R. 27. 2 P.M. 37. S.S. 37.)

Jan. 9. Tues. Still cloudy and rainy. Howard C. is eighteen years old and still he has not entered the Agricultural College at Davis, which he has so long been planning to do. His father is so busy and Howard is such good help, that there has not come the time when he can be well spared from the dairy here. I hope that time will very soon come. The storm, being mild, did not interfere with Hannah and Theresa meeting in Stockton to do shopping. Hannah went and came home by auto-stage, and they bought a piece of tapestry with which to cover cushions, head rests and lounge here in my room, to which they, with Willie and Ida contributed. Received postal from Ada and letter from Theresa and wrote to Ada. Theresa writes that the whole herd of Moving cows which they have been milking has been sold and shipped in one bunch, so they are relieved of that work. (T.S.R. 44. 2 P.M. 52. S.S. 48.)

Jan. 13. Sat. The A.M. was foggy. Little Olga is five years old and is very anxious to begin to take music lessons on the piano. She is bright, smart and capable for her age. Have written to the children in the East. Hannah received a letter from Elizabeth Westerfield, who has entered a school in Los Angeles, to train for a kindergarten teacher, or to work in the mission, or perhaps to preach, she did not seem to know which. We suppose it is a Holiness School, although she did not say so. (T.S.R. 43. 2 P.M. 49. S.S. 46.)