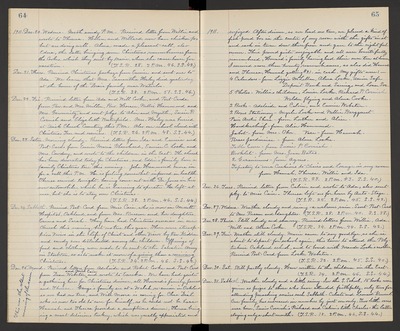 1911. Dec. 20. Wednes. North windy P.M. Received letter from Willie and wrote to Theresa. Helen and Willard now have chicken fox but are doing well. Alma made a pleasant call, also Edna, the latter bringing some Christmas remembrances from the Cookes, which they sent by Marie, when she came home for vacation. (T.S.R. 28. 2 P.M. 46. S.S. 42.)

Dec. 23. Satur. Morning cloudy. Received letters from Ida and Eunice and Post-Cards from Cousin Maria Blanchard, Eunice C. Locke and Mrs. Cowdery, and wrote to the children in the East. The church has been decorated today for Christmas, and Eddie's family have a family Christmas tree this evening. John Hammond came in for a call this P.M. He is feeling somewhat improved in health. Theresa arrived tonight, having come out with Dr. Jones in his new automobile, which he is learning to operate. He left at once, but she is to stay over Christmas. (T.S.R. 38. 2 P.M. 46. S.S. 44.)

Dec. 24. Sabbath. Received Post-Card from Miss Cain, who is now in Merritt Hospital, Oakland, and from Mrs. Russem and her daughters, Emma and Sarah. They have had Christmas exercises in our Church this evening, but no tree this year. There were stereopticon Views in the Life of Christ and other Views by Rev. Kidder and candy was distributed among the children. Offerings of food and clothing were made to be sent to the Salvation Army in Stockton, so as to make it more of a giving than a receiving Christmas. (T.S.R. 34. 2 P.M. 46. S.S. 42.)

Dec. 25. Mond. Received letters from Adelaide and Robert Cooke and Post-Card from Dean Webster and Miss Cain and wrote to Eureka. We have had quite a gathering here for Christmas dinner, all Howard's family, James and Theresa. George's family are at a Walsh re-union in Oakland so we had no tree, and Will Moore is caring for Chas. Dial who is now too old to care for himself, so he could not be here. Hannah and Theresa provided a sumptuous dinner, Theresa bringing a most delicious turkey, which was greatly appreciated and

This was the coldest morning of the season.

1911. enjoyed After dinner, as we had no tree, we place a kind of fish-pond box in the center of my room with the gifts in it and each in turn drew there from and gave to the rightful owner. This proved quite enjoyable and all were bountifully remembered, Howard's family having had their own tree at home. I received more than twenty remembrances, as also did Hannah and Theresa, Hannah getting $21- in cash. My gifts were:- 4 Calendars - from Lizzie McLellan, Alma Locke, Union Safe Deposit Bank and Savings and Loan Soc. 5 Photos - Willie's children, Louise Locke, Richard P. Cornish Weldon flying and Alma Cooke. 2 Books - Adelaide and Calvin, and Eunice Webster. 2 Boxes Stationery - Myrtle Locke and Nellie Bergquest. Pair Arctic Shoes - from Luther and Alice. Handkerchief - from Alice Hammond. Jabot - from Mrs- Ober. Vase - from Hannah. Brass Jardiniere - from Alma Locke. Table Cover - from Susie P. Cornish Booklet - from Mrs. Joan Bates. 2 Geraniums - from Agnes. Tapestry to cover Cushions to Chairs and Lounge in my room from Hannah, Theresa, Willie and Ida. (T.S.R. 23. 2 P.M. 43. S.S. 40.)

Dec. 29. Fri. Weather still cloudy. Marie came to say goodbye, as she is about to depart for school again, this time to attend the Polytechnic Oakland school, and to board with Maude Locke's mother. Received Post-Card from Locke Webster. (T.S.R. 32. 2 P.M. 45. S.S. 40.)

Dec. 31. Sabbath. Weather cloudy and a little rainy. In the S. School, 15 books were given as prizes to those who have attended faithfully, only two for attending preaching services each Sabbath - Celeste and Leonard Bruml. Our family has increased in numbers by just one only. Two little ones were born, Susie Cornish's Richard and Calvin's little Charles - the latter staying only a short months. (T.S.R. 38. 2 P.M. 46. S.S. 44.)