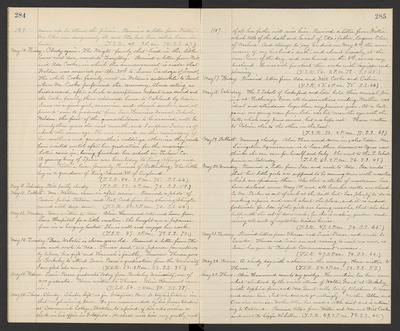 May 10. Friday. Cloudy again. The Wright family that lived in the little house next door, moved to Tracy today. Received a letter from Will and Ada Cooke, in which the announcement is made that Weldon was married on Apr. 30th to Irene Cardoza of Sunol. The whole Cooke family went in Weldon's automobile to Sunol where Mr. Cooke performed the ceremony, Alma acting as bridesmaid, after which a sumptuous repast was served and the Cooke family then returned home to Oakland by train. Irene is a good girl, musician and church worker, and at present soon to graduate from San Francisco Normal School. Weldon, the first of the grandchildren to be married, will be twenty three years old next month, and I supposed Irene is of about the same age. She was married on the anniversary of her mother's and grandmother's weddings, otherwise they would have waited until after her graduation for the marriage. Lottic came in, having finished her school in Tulare Co. A young king of Spain was born today to King Alfonzo and Queen Victoria Ema, formerly Princess of Battenburg. The little boy is a grandson of King Edward VIII of England. (T.S.R. 54. 2 P.M. 75. S.S. 64.)

May 14. Tuesday. Dean Webster is eleven years old. Received a letter from Theresa and wrote to Ada. Theresa sent two Japanese flower stands by Express, her gift and Hannah's jointly, tomorrow Theresa goes to Berkeley to attend Susie Pascoe's graduation from the University I am glad she can go. (T.S.R. 52. 2 P.M. 87. S.S. 75.)

May 16. Thurs. Cloudy. Chester left us for Goldfield, Nev. to try his fortune in that rough mining town. He goes recommended by his former teacher at Commercial College, Stockton, to a friend of his who wishes a clerk in his office in Goldfield. We shall miss him very greatly most

1907. of all his father will miss him. Received a letter from Willie which tells of the death and burial of Etta's father, Eugene Ober of Nashua, And strange to say he died on May 4th the anniversary of my husband's death, and almost precisely at the same hour of the day, and was buried on the 8th as was my husband. He was sick for about three weeks with legrippe and pleurisy. (T.S.R. 56. 2 P.M. 78. S.S. 65.)

May 18. Saturday. The S. Schools of Locke ford and Lodi held their annual picnic at Tutheway's Grove, all denominations uniting. Weather was ideal and attendance larger than any previous year. At a ball game one young man from Lodi was hit near the eye with the ball, which may prove serious, but we hope not. Have written to Calvin, also to the others in the East. (T.S.R. 50. 2 P.M. 77. S.S. 69.)

May 20. Monday. Received a letter from Ida and wrote to Ada. Ida writes that her little girls are supposed to be coming down with measles which are epidemic there. Also that a strike of woodsmen has been declared since May 1st and all lumber mills are closed. So Mr. Parker is out of work at the Mill but has plenty to do in making repairs and work about the place, and it is indeed fortunate for Ida, if the girls are having measles, that she has help with the out, of doors work, for she is making garden and raising all sorts of vegetables, besides berries. (T.S.R. 47. 2 P.M. 74. S.S. 65.)

May 21. Tuesday. Received letters from Theresa and Susie Pascoe and wrote to Eureka. Theresa and Susie are not coming to visit us now, as Susie has gone to Stanford Commencement exercises. (T.S.R. 47. 2 P.M. 74. S.S. 62.)

May 23. Thurs. Alice Hammond came to say goodbye. Her vacation has been some what shortened by the serious illness of Walter Grant at Berkeley with typhoid fever, and Mrs. Grant calls her by telephone to come and nurse him, but the does not go willingly. Mother Allen and Ora also came in. Mother Allen has made little visit and is returning to Oakland. Received letters from Willie and Ada Will Cooke and wrote to Lizzie McLellan. (T.S.R. 49. 2P.M. 73. S.S. 65.)