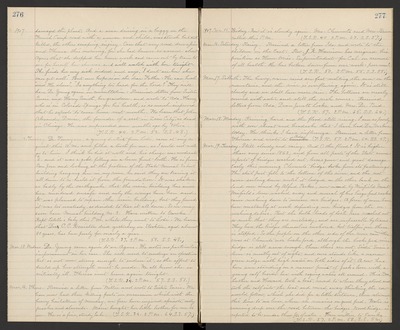 1907. damaged the plant. And a man driving in a buggy on the French Camp road with a woman and child. was struck but scot killed, the others escaping injury. Over that very wad drove Jim and Theresa this morning, for she had become so worried about Agnes that she dropped her home work and came out by train to see for herself how she was, and will watch with her tonight. She finds her very sick indeed and says, "I dont see how she can get well". But our hope is n the dear Father. he can heal "and He alone". "Is anything too hard for the Lord?" They will have Dr. Young again in consultation. Received letters from Sister Susie and Harry Smith her grandson, and wrote to Ada. Harry who is in Colorado Springs for his health, is so much improved that he expects to come home next month. We learn that John Alexander Dowie, the founder of a sect in Zion City, is dead in Chicago, He was superseded some months ago by Voliva. (T.S.R. 44. 2 P.M. 52. S.S. 48.)

Mar. 12. Tuesday. Dr. Tenny son, a young dentist from Lodi, came at my request this A.M. and filled a tooth for me, as I could not well go to him. I think he did it well and his charge was moderate $6. and it was a good filling in a lower front tooth. He is from San Jose and looking at the picture of the State Normal School building hanging here in my room, he said they are tearing it all down to re-build it from the foundation. It was shaken. so badly by the earthquake that the main building has since been considered unsafe and only the wings have been used. It was planned to repair the main building. but they found it was too unsteady, so decided to tear it all down. So we may soon have Normal building No. 3. Have written to Eureka. Kept Estelle's baby this P.M. while they went to Lodi. We learn that Dear C.C. Keniston died yesterday in Stockton, aged almost 80 years, has been poorly for nearly a year. (T.S.R. 37. 2 P.M. 58. S.S. 48.)

Mar. 13. Wednes. Dr. Young came again to see Agnes. He notes no particular improvement in her case. She will need to undergo an operation but is not now strong enough to endure it, so the effort to build up her strength must be made. We all know she is critically ill. Theresa went home again tonight. (T.S.R. 34. 2 P.M. 57. S.S. 51.)

Mar. 14. Thurs. Received a letter from Willie and wrote to Sister Susie. We have now had three killing frosts in succession which with the heavy hail storm of Monday, we fear have injured apricots, early peaches and almonds. Marie brought her little brother for me to see. He is a fine, sturdy babe. (T.S.R. 34. 2 P.M. 64. S.S. 57.)

Mar. 16. Saturday. Rainy. Received a letter from Ida and wrote to the children in the East. Rev. J.K. Harrison has resigned his position as Home Miss. Superintendent for Cal. on account of ill health. He has broken down from over-work-poor man! (T.S.R. 50. 2 P.M. 55. S.S. 55.)

Mar. 17. Sabbath. The heavy. warm rains are fast melting the snow on the mountains, and the river is over flowing again. It is still cloudy and we shall have more rain. The bottoms are nearly covered with water and still the rush comes. Received letters from Ada, Dean Jewett Locke and Mrs. Dr. Pound. (T.S.R. 57. 2 P.M. 65. S.S. 64.)

Mar. 19. Tuesday. Still cloudy and rainy. And O the flood! It is higher than any since 1862, and from all parts of the State come reports of bridges washed out, levees gone and great damage. Early this morning Clements bridge broke from its fastenings. The steel part fell to the bottom of the river, and the rest came sailing down until it lodged on the other bank on the land once owned by Alfred Parker, now owned by Winfield Mont. Winfield's levee washed away and several of hi large feed racks came rushing down to menance our bridges. A force of men leave been constantly at work defending our bridges from the on rushing debris. But the bulk head of both have rushed out so much that they are unsteady, and are impassable by teams. They have the bridges themselves anchored but traffic over them is stopped. So the people on the other side of the river can neither cross at Clements nor Lockeford, although the Lockeford river bridge is still secure enough, these others are not. Sister Susie's levee is mostly out of sight, and ours stands like a narrow green ridge with high water on both sides of it. A cow has been seen standing on a narrow point of Jack's liver with a young calf beside her with raging waters all around. This P.M. Luther and Howard took a boat, rowed to where they stood and took the calf into the boat and rowed away thinking the cow would follow, which she did for a little distance, then returned this time to our levee, where the remains on good feed. Water is running deep over the road between the bridges. Wood bridge is uported to be under three ft. of water. Have written to Eureka. (T.S.R. 57. 2 P.M. 58. S.S. 56.)