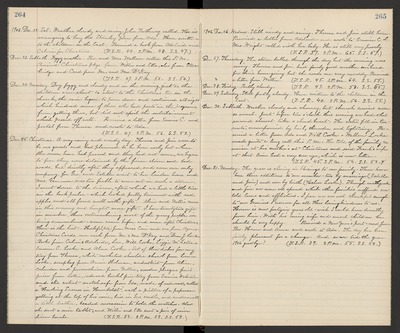 Dec. 24. Monday. Day foggy and cloudy and in the evening, just as the children were about to start to the Christmas tree in the church, the rain began to pour down and continued all night which kindered some of those who had parts in the program from getting there, but did not spoil the entertainment which passed off well. Received a letter from Eunice C. and postal from Theresa and wrote to Ada. (T.S.R. 47. 2 P.M. 56. S.S. 53.)

Dec. 25. Christmas. A very rainy and windy day. Theresa and Jim were to be our guests and had planned to be here early but when the noon hour had passed and they had not come, we began to fear they were detained by the fierce storm and bad roads, but directly after they appeared, and were our only company, for Geo, and Estelle went to her Linden home and Mrs. Gammon was too feeble to come out in such a storm. I went down to the dinner, after which we had a little tree in the back parlor which looked pretty trimmed with red apples, and all fared well with gifts. Alice and Nellie came in this evening and brought more gifts. I have twenty two gifts in number, thus outnumbering most of the young people in being remembered, some came before and some after Christmas. Here is the list: Hdkfs (two) from Miss Casin and one from Agnes, Christmas Cards, one each from Mr. & Mrs. DeKay and Dean J. Locke, Books from Calvin, Adelaide, Lou, Will Cooke, Lizzie McLellan Eunice C. Locke and Alma Cooke, Set of blue dishes for my tray from Theresa, while crocheted shoulder shawl from Louise Locke, scrap bag from Annie Holman, underskirt from Alice. Calendar and pincushion from Nellie, wooden placque fruit piece from Lottie, redwood burhl pin tray from Eunice Webster and the cutest match safe from Ida, made of redwood, called a "Howling Success in Humboldt", with a picture of a papoose yelling at the top of his voice, tied in his cradle, and underneath a little leather, beaded mocassin to hold the matches. Also she sent a nice tablet, and Willie and Etta sent a pair of nice linen towels. (T.S.R. 53. 2 P.M. 58. S.S. 58.)

Dec. 27. Thursday. The storm dulled through the day but the evening was rainy. Theresa and Jim had fairly good weather overhead for their home going but the roads are very muddy. Received a letter from Willie. (T.S.R. 45. 2 P.M. 64. S.S. 55.)

Dec. 30. Sabbath. Weather cloudy and showery, but church services were as usual. Just before ten o'clock this evening we had what seemed almost like a cloud burst. The water fill in torrents, accompanied by hail, thunder and lightning. Received a letter from Ada and Will Cooke. Wallace Locke made quite a long call this P.M. He told of the family reunion at his mother's at Christmas and said Frank's wife at that time had a very sore eye, which is now better. (T.S.R. 45. 2 P.M. 54. S.S. 52.)

Dec. 31. Monday. The year is closing in blessings to our family. There have been three additions to our number two by marriage (Estelle and Jim) and one by birth (Helen Locke). Through earthquake and fire we were all spared while other families suffered untold losses and afflictions. I fear we are not thankful enough to our Gracious Preserver for all His loving kindness to us. Horace is now fortysix years old, wish I could hear directly from him. With his loving wife and smart children he should be very happy. Received a New Year's postcard from Bro. Horace and Anna and wrote to Ada. The day has been fairly pleasant for a change. And so we bid the year 1906 goodbye! (T.S.R. 39. 2 P.M. 55. S.S. 52.)