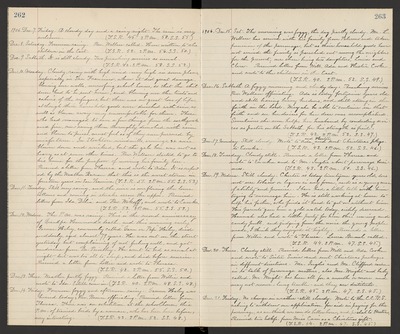 Dec. 10. Monday. Cloudy, rainy with high wind, very high in some places, especially in San Francisco, where it did great damage, blowing over walls, unroofing school houses, so that the children had to be sent home, and blowing over the tents and cabins of the refugees, but there was no great loss of life, although their household goods were drenched with rain, as well as blown away very uncomfortable for them. Those who had managed to save a few things from the earthquake and fire, now seeing them thoroughly drenched with rain and blown to pieces, must feel as if they were pursued by misfortune. In Stockton windmills, awnings, x.c. were blown down and wrecked, but the gale here was not as heavy as at some other times. Rev. Wallace started to go to his home for the purpose of moving his family here. Received a letter from Theresa and wrote to Ada. It is reported by the Weather Bureau that this is the worst storm in fourteen years in San Francisco. (T.S.R. 51. 2 P.M. 55. S.S. 53.)

Dec. 12. Wednes. The P.M. was rainy. This is the second anniversary of Grandpa Hammonds death, and this morning early Garner Haley, commonly called "Garn of Pap" Haley, died suddenly, aged almost 79 years. He was out on the street yesterday but complaining of not feeling well, and got medicine from Dr. Priestley. He went to bed as usual at night but was too ill to sleep, and died before sunrise. Received a letter from Lottie and wrote to Theresa. (T.S.R. 42. 2 P.M. 55. S.S. 50.)

Dec. 14. Friday. Forenoon foggy and afternoon rainy. Garner Haley was buried today, Rev. Brown officiating. Received letter from Theresa. There was an exhibition at the school house this P.M. of trained birds by a woman, who has been here before, very interesting. (T.S.R. 43. 2 P.M. 52. S.S. 48.)

1906. Dec. 15. Sat. The morning was foggy, the day partly cloudy. M. L. Wallace has arrived with his family from Palermo and taken possession of the parsonage, but as their household goods have not arrived, the family is parceled out among the neighbors for the present, our share being two daughters, Louise and Clara. Received letters from Will, Ada and Hester Cooke and wrote to the children in the East. (T.S.R. 40. 2 P.M. 52. S.S. 49.)

Dec. 16. Sabbath. A foggy morning and cloudy day. Preaching services Rev. Wallace officiating. Ada is today fortynine years old and still bearing heavy burdens, and still strong in the faith in the Lord. May she be able to continue in that faith and see her desires for her dear ones accomplished. Sometimes she even helps her husband by conducting services as pastor on the Sabbath, for this strength is fail. (T.S.R. 42. 2 P.M. 52. S.S. 47.)

Dec. 19. Wednes. Still cloudy. Chester is today twenty one years old, does not use tobacco or liquor in any form, and is a young man of ability and promise. I have had a little talk with him trying to encourage him. He is still working at home to help his father, who finds it hard to get on without him. His parents gave him a gold watch today, richly deserved. Hannah also had a little party for him this evening and candy pull, and judging from the noise the young people made, I think they enjoyed it highly. Received a letter from Willie and wrote to Theresa. Laura Bruml called. (T.S.R. 44. 2 P.M. 47. S.S. 45.)

Dec. 20. Thurs. Cloudy still. Received letters from Will and Ada Cooke and wrote to Sister Susie and sent Christmas packages in different directions. Mr. Inglis and Mr. Clifford came in to talk of parsonage matters, also Mrs. Wright and baby called. Mr. Wright has been ill for a month or more and may not recover lung trouble and they are destitute. (T.S.R. 45. 2 P.M. 47. S.S. 45.)