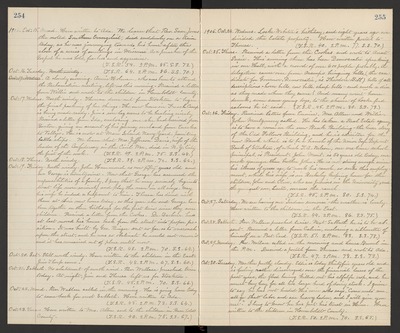 1906. Oct. 15. Mond. Have written to Ada. We learn that Rev. Sam Jones the noted Southern Evangelist, died suddenly on a train today, as he was journeying towards his home after the close of a series of meetings in Missouri. As a preacher of the Gospel he was bold, fearless and aggressive. (T.S.R. 54. 2 P.M. 85. S.S. 73.)

Oct. 16. Tuesday. A cloudy morning. Annie Holman, who was here to attend the Reclamation meeting, left us this morning. Received a letter from Willie and wrote to the children in Humboldt County. (T.S.R. 64. 2 P.M. 86. S.S. 70.)

Oct. 17. Wednesday. North windy. Theresa drove out from Stockton to begin the final packing of her things. The new home French Camp is being made ready. Jim's sow leg seems to be healing nicely. Received a letter from Ida, enclosing one she had received from Benton, giving an account of his journey overland from Eureka to Vallejo. He is now at More Island Navy Yard, painting battle ships. We learn that Mrs. Jefferson Davis, wife of the leader of the Confederacy in the Civil War, died in N. Y. City the first of the week. (T.S.R. 49. 2 P.M. 75. S.S. 68.)

Oct. 19. Friday. North windy. John Hammond is now fifty years old and our George is twenty nine. Now that George has assumed the responsibilities of a family, I pray that he may seriously begin to treat life more seriously and play the men in all ways. May his wife be indeed a help meet to him. Theresa has dined with them at their new home today, so this year she and George have been together on their birthdays for the first time since they were children. Received a letter from the Cookes. Dr. Barbour has at last moved his house back from the street into proper position. It was built by Geo. Ringer out so far as to incroach upon the street, and he was so obstinate he would not move it and it has remained out of place until now. (T.S.R. 48. 2 P.M. 70. S.S. 64.)

Oct. 25. Thurs. Received a letter from the Cookes and wrote to Aunt Susie. This evening there has been Democratic speaking in our Hall, with a crowd of over 600 people probably. A delegation came over from Ocampo bringing bells, (the candidate for Governor, Democratic, is Theodore Bell) bells of all descriptions-horse bells, cow bells, sharp bells and such a din as they made when they came! And many went home drunk, even some young boys, to the shame of Lockeford saloons be it said. (T.S.R. 45. 2 P.M. 80. S.S. 73.)

Oct. 26. Friday. Received Letters from Eunice, Mrs. Allen and Willie. John Montgomery called. He has taken a Real Estate agency is to have a room in the new Bank Building the lower story of the Odd Fellows Building, and he is solicitor for the new Bank, which is to be a branch of the Union Safe Deposit Bank of Stockton, of which T. A. Nelson, our one-time school principal, is President. John Mont, is 50 years old today, one week younger than brother John. He is not strong enough since his illness of years ago, to work his ranch, so seeks this employment, while his wife is in Berkeley keeping house for the children, John and Olive, who are Juniors in the University, and the youngest son, Lester, oversees the ranch. (T.S.R. 45. 2 P.M. 80. S.S. 74.)

Oct. 30. Tuesday. Weather partly cloudy. Eddie is today thirty five years old and is feeling rather discouraged over the financial losses of the past year, the flood having killed out his alfalfa crop, and he must buy hay for all his large herd of dairy stock. I grieve to say he has not heeded His voice who says, "Come unto me, all ye that labor and are heavy laden, and I will give you rest." I long to know he has put his trust in Him. Have written to the children in Humboldt County. (T.S.R. 50. 2 P.M. 70. S.S. 65.)