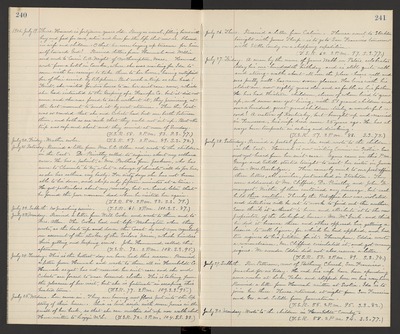 1906. July 19. Thurs. Howard is fortyseven years old. Busy as usual, filling barns with hay and feed for cows, active and keen for the life that now is, blessed in wife and children O that he were laying up treasure for himself towards God! Received letters from Hannah and Willie and wrote to Cousin E.A. Wright of Northampton, Mass. Hannah wrote from a hotel in Eureka, where she was waiting for Ida to come with her carriage to take them to her home, having notified her of their arrival by telephone. But such a trip as she had! First, she waited for two hours to see her suit case come, which she had interested to the keeping of a Transfer Co. but it did not come and she was forced to sail without it, they promising at the last moment to send it by next steamer. Then the boat was so crowded that she and Celeste had but one berth between them, and both so sea-sick that they could not sit up. But the trip was safe and short and they arrived at noon of Sunday. (T.S.R. 58. 2 P.M. 93. S.S. 77.)

July 21. Saturday. Received a letter from Mrs. E.C. Allen and wrote to the children in the East. Dr. Priestley called to inquire about my asthma cure. He has a patient, a Mrs. Prothers from Jackson, who has come to Clements to try what a change of climate will do for her, as she has asthma very badly. For sixty days she has not been able to lie down, and sleeps only fifteen minutes at a time. He got particulars about my remedy, but we heard later that he found the poor woman dead when he visited her again. (T.S.R. 54. 2 P.M. 93. S.S. 79.)

July 23. Monday. Received a letter from Will Cooke and wrote to them and to Mrs. Allen. The Cookes had not left Washington when they wrote, as the boats up and down the coast do not run regularly on account of the strike of the Sailor's Union, which hinders their getting and keeping crews. John Hammond called this afternoon. (T.S.R. 72. 2 P.M. 108. S.S. 95.)

July 24. Tuesday. This is the hottest day we have had this season. Received a letter from Hannah and wrote to them all in Humboldt Co. Hannah as yet has not received her suit case and she and Celeste are forced to wear borrowed clothes. This is taking from the pleasure of her visit, but she is fortunate in escaping this heated term. (T.S.R. 77. 2 P.M. 109. S.S. 95.)

July 26. Thurs. Received a letter from Calvin. Theresa went to Stockton tonight with James Thorp is to go to San Francisco tomorrow with Stella Condy on a shopping expedition. (T.S.R. 64. 2 P.M. 97. S.S. 77.)

July 27. Friday. A man by the name of James Webb in Peters, celebrates today his one hundredth birthday and is still quite well and strong walks about all over the place hears well and sees pretty well has never worn glasses. He lives with his eldest son, now eighty years old and as feeble as his father. He has had thirteen children, eleven of whom lived to grow up, and seven are yet living, with 51 grand children and over a hundred great grandchildren truly a wonderful record! A native of Kentucky, but brought up and married in Tennessee, his wife died some 25 years ago. He has always been temperate in eating and drinking. (T.S.R. 57. 2 P.M. 88. S.S. 73.)

July 28. Saturday. Received a postal from Ida and wrote to the children in the East. Hannah is now visiting Eunice in Scotia has not yet heard from her suit case. Agnes came in this P.M. George and Estelle started tonight to visit her sister in James town Mrs. Overholzer. There came by mail to our post office three letters, all similar, post marked in Stockton. They were addressed to Mr. Clifford, Dr. Priestley and John Demangcot. Neither of them contained any message, but each held three matches. Thereby the Post office law was violated and detectives will be set to work to find out the author. Some think it a threat to burn and attribute it to the new proprietor of the Lockeford house. Mr. McGurk and think he did it because these and others opposed his getting a license to sell liquor, for which he had applied, and had ten signers do his petition for it. Therefore, Eddie wrote a remonstrance, Mr. Clifford circulated it, and got many signs. We wonder Eddie did not also receive a letter. (T.S.R. 53. 2 P.M. 89. S.S. 74.)

July 29. Sabbath. Rev. Patterson, now of Bethany Church, San Francisco, preached for us today. He and his wife have been spending some weeks at Lake Tahoe and stopped here on his way home. Received a letter from Hannah written at Scotia. Ida is to join her these. Theresa returned at night from San Francisco and Geo. and Estelle from Jamestown. (T.S.R. 55. 2 P.M. 95. S.S. 82.)