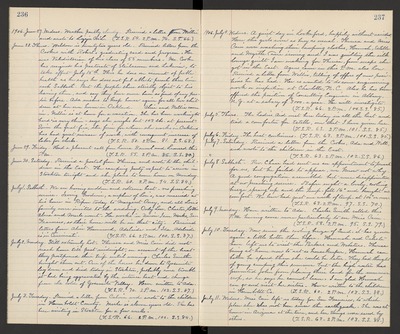 June 28. Thurs. Weldon is twenty two years old. Received letters from the Cookes with Robert's graduating card and program. He was Valedictorian of his class of 55 members. Mr. Cooke has resigned his pastorate of Steilacoom and Lakeview, to take effect July 15th. This he does on account of feeble health as he says he does not feel able to preach three time each Sabbath. But the people there strictly object to his leaving them, and say they have never been so fond of any pastor before. Ada wishes to keep house again for all her children at her own house in Oakland. Alice and Nellie came in. Neliie is at home for a vacation. She has been working too hard is very thin - says she weighs but 103 lbs. at present. Since the great fire, the firm for whom she works in Oakland has had great increase of work, with consequent increase of labor for clerks. (T.S.R. 50. 2 P.M. 81. S.S. 68.)

June 30. Saturday. Received a postal from Theresa and wrote to the children in the East. The camping party expect to arrive in Stockton tonight and she plans to come home on Monday. (T.S.R. 60. 2 P.M. 94. S.S. 84.)

July 1. Sabbath. We are having sudden and extreme heat no preaching service. Irving Goodwin, a nephew of Lou's, was married at his home in Ripon today to Margaret Oney, and call Lou's family were invited to the wedding. Only Lou, Chester, Lottie Alma and Merke want. Her works in Union Iron Works, San Francisco, so their home will be in that city. Received letters from Alice Hammond, Adelaide and Ida, Adelaide is in Cincinnati. (T.S.R. 66. 2 P.M. 100. S.S. 87.)

July 2. Monday. Still extremely hot. Theresa and Miss Cain did not reach home till past midnight, on account of the heat they postponed their trip until evening. Charles Smith brought them out. One of the horses he drove to Yosemite lay down and died today in Stockton, probably some trouble it had being aggravated by the intense heat and change from the cold of Yosemite Valley. Have written to Ada. (T.S.R. 70. 2 P.M. 102. S.S. 87.)

1906. July 4. Wednes. A quiet day in Lockeford, happily without accident. Here the girls were as busy as usual. Theresa and Miss Cain were washing their camping clothes, Hannah, Estella and Myrtle were ironing and I was quilting the silk lounge quilt I am making for Theresa, from scraps she got in the East. Agnes came in this P.M. also Lou. Received a letter from Willie, telling of offers of new positions he has had. He is wanted to do some engineering work or inspection at Charlotte, N.C. Also he has been offered the position of Consulting Engineer in Albany, N.Y. at a salary of $3000. a year. He will investigate. (T.S.R. 66. 2 P.M. 100. S.S. 85.)

July 8. Sabbath. Rev. Chase had sent us an appointment to preach for us, but he failed to appear, we know not why. A good congregation assembled but were disappointed at no preaching service. Before night a lovely, cooling breeze sprang up and the temp. fell 16 degrees and brought us comfort. We have had just one week of temp. at 100 degrees or over. (T.S.R. 63. 2 P.M. 97. S.S. 70.)

July 10. Tuesday. Now since the cooling breeze of Sund. it has grown again a little hotter than before. Hannah and Celeste have left us to visit the Parkers and Webster. Theresa being at home now to act as house keeper, Hannah can better be spared than she could be later. They had thought of going camping this summer but the high water has prevented John from plowing their land for the summer crop, so he says he cannot leave. I am glad Hannah can go and visit her sisters. Have written to the children in Humboldt Co. (T.S.R. 60. 2 P.M. 103. S.S. 88.)