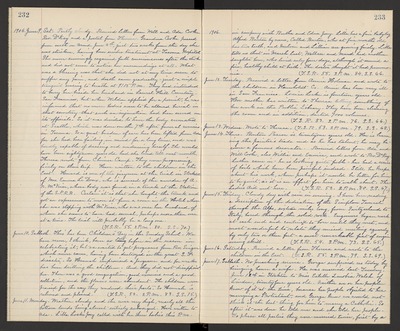 1906. June 9. Sat. Partly cloudy. Received letters from Will and Ada Cooke. Rev. DeKay and a postal from Theresa. Grandma Cooke passed from earth on Mond. June 4th, just two weeks from the day she was stricken, having been under treatment at Tacoma Hospital. She never seemingly regained full consciousness after the stroke and did not seem to notice her surroundings at all. What was a blessing was that she did not at any time seem to suffer any pain, and death came gradually just a simple tranquil scaring to breathe at 9:15 P.M. They had intended to bury her beside her husband in Laurel Hill Cemetery. San Francisco, but when Weldon applied for a permit, he was informed that no more bodies were to be allowed burial in that cemetery that such an injunction had been served on its officials. So it was decided to have the body cremated at Seattle, which was done on the 7th after funeral at services in Tacoma. So a great burden of care has been lifted from Ada for she had been failing in mind for a long time, and was hardly capable of dressing and undressing herself. She would have been eighty seven years old had she lived till next month. Theresa wrote from Chinese Camp. They were progressing finely on their trip. Have written to the children in the East. Howard is one of the jurymen at the trial in Stockton of Mrs. Emma Le Doux, who is accused of the murder of A. N. McVicar, whose body was found in a trunk at the Station of the S.P.R.R. Certain it is that she bought the trunk and got an expressman to more it from a room in the Hotel when she was stopping with McVicar, who was once her husband, of whom she seems to have had several, perhaps more than one at a time. The Trial will probably be a long one. (T.S.R. 55. 2 P.M. 80. S.S. 70.)

June 10. Sabbath. This has been Children's Day in the Sunday School. We have never, I think, been so late before in the season in celebrating it, but we waited to get programs from Rev. Singer which never came, having been destroyed in the great S.F. disaster. So Hannah improvised a program and for weeks has been drilling the children. And they did not disappoint her. There was a good congregation, good exercises and a good collection, and the flowers were abundant. The children were praised for the way they rendered their parts. So Hannah is relieved and pleased. (T.S.R. 52. 2 P.M. 83. S.S. 75.)

June 11. Monday. Weather cloudy and the river very high, nearly all the bottom lands being almost entirely submerged. Have written to Ada. Lilla Locke Jory called with her three babies this P.M.

1906. in company with Bertha and Edna Jory. Lilla has a fine baby boy Alfred Burton by name, called Burton, who at five months old has two teeth, and Melvin and Lillian are growing finely. Lilla tells us that in March last, Wallace and Mand hd another daughter born, who lived only four days, although it seemed a fine, healthy child at birth. The doctor thought it had pneumonia. (T.S.R. 55. 2 P.M. 84. S.S. 66.)

June 12. Tuesday. Received a letter from Annie Holman and wrote to the children in Hamboldt Co. Annie has been very ill in San Francisco. Louise Locke is fourteen years old. Her mother has written to Theresa telling something of her work in the Public Library. They have been cleaning the room and in addition, dusted 7000 volumes. (T.S.R. 53. 2 P.M. 76. S.S. 66.)

June 14. Thurs. Burton Pascoe is twenty one years old. He is learning the painter's trade and as he has talent, he may become a famous decorator. Received letters from Ada and Will Cooke, also Willie and Eunice, and wrote to Rev. DeKay. Luther came in he is looking quite feeble - has had a series of boils which have been painful indeed. Still he keeps about his work, when perhaps it would be better for him to be quiet, as it is an effort for him to walk about. The Ladies Aid met here. (T.S.R. 52. 2 P.M. 80. S.S. 67.)

June 15. Friday. Cloudy day with rain in evening. I have been reading a description of the dedication of the Simplon Tunnel through the Alps, sixteen miles long, from Switzerland to Italy, bored through the solid rock. Engineers began work at each end and continued to bore until they met, and most wonderful to relate they missed meeting squarely by only two or three feet - a most remarkable feat of engineering skill. (T.S.R. 54. 2 P.M. 73. S.S. 65.)

June 17. Sabbath. No preaching service. George surprised us today by bringing home a wife. He was married last Tuesday, June 12th in Stockton to Miss Estella Lenobia Walsh of Linden, twenty four years old. Neither we or her people knew of it at the time, because her people objected to her marrying a Protestant, and George knew we would not think it the best thing for him to marry a Catholic. So after it was done he told me and she told her people. To please all parties they were married twice, first by a