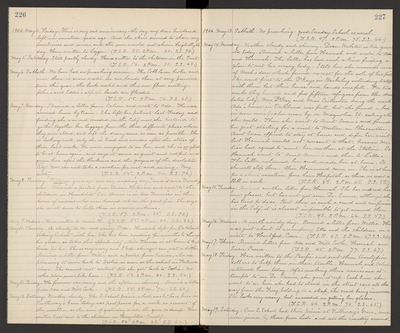 May 6. Sabbath. We have had no preaching service. The Cobb levee broke and now there is more water on our lands than at any previous time this year, the back water and this new flood meeting. John's and Eddie's alfalfa lands are flooded. (T.S.R. 55. 2 P.M. 76. S.S. 69.)

May 7. Monday. Received a letter from Calvin and wrote to Ada. Theresa arrived home by train. She left her patient last Friday and finding she was not needed in the City now, she hastened to gather together her baggage from the three differents places where they were stored, and left the dreary scene as soon as possible. She is looking well, only she is tired and nervous after the stress of these last weeks. We were overjoyed to see her, and she is so glad to be at home again, and says it seems so quiet and restful and green here after the blackness and the grayness of the desolated City. Now she will take a vacation for rest and sewing. Very sultry. (T.S.R. 55. 2 P.M. 80. S.S. 78.)

May 8. Tuesday. Fiftyone years ago was my wedding day, and it was Tuesday also. Received a postal from Annie Holman and wrote to the children in Humboldt Co. Annie is in San Francisco in the home of cousins who were burned out in the great fire. She says she went down to help them in serious sickness. (T.S.R. 59. 2 P.M. 85. S.S. 73.)

May 10. Thursday. A cloudy A.M. and rainy P.M. Hannah left for Oakland taking Celeste with her. She has been needing for a months to change her glasses, so takes this opportunity while Theresa is at home to keep house for her. She is very weary and I hope she now can rest a little. Received a letter from Willie and a postal from Eunice, who is planning to move back to Scotia as soon as the school in Fortuna closes. She cannot rest content till she gets back to Scotia. No other place seems like home. (T.S.R. 53. 2 P.M. 66. S.S. 56.)

May 12. Saturday. Weather cloudy. The S. School picnic, which was to have been in Tutheway's Grove today was postponed for a week on account of the weather, as the rain of yesterday made the grass so damp. Have written East and to the children in Humboldt County. (T.S.R. 50. 2 P.M. 69. S.S. 60.)

May 14. Monday. Weather cloudy and showery. Dean Webster is ten years old today. Received a letter from Hannah and wrote to Ada and Hannah. The latter has had such a time finding a place to rest her weary body. I tell her she reminds me of Noah's dove which "found no rest for the sole of her food" She went first to the DeKays in Berkeley intending to stop with them but their house and hands were full. For two weeks they housed and fed fifteen refugees from the desolated City, Mrs. DeKay and Miss Crittenton doing the work. Ada's house in Oakland was full, but she found a bed in some one's parlor near by, on Magnolia St. eating who she could. Then she went to Aunt Susie's and found her just starting for a visit to Mertice in Pleasanton. Aunt Susie offered to stay at home and defer her visit but Hannah would not consent to that, because Mertice had agreed to meet her mother at the Station. So Hannah went to Aunt Annie's and then to Lilla's. The latter welcomed her and made her at home. So she will stop there. Alice Hammond, came in. She is at home for a short vacation from Lane Hospital, as there is now a [?] in work. (T.S.R. 55. 2 P.M. 65. S.S. 55.)

May 15. Tuesday. Received another letter from Hannah. She has ordered her new glasses, but has not yet seen Dr. Somers, although she has tried to do so. But there is such a crowd and confusion in the City, it is almost impossible to get around there. (T.S.R. 42. 2 P.M. 66. S.S. 57.)

May 18. Friday. Have written to the Pacific and sent them twentyfive dollars to help them in their trouble. Hannah and Celeste returned home today. After making three wearisome attempts to see Dr. Somers, she gave it up. Each time she went to see him she had to stand in the street cars all the way from the Ferry, holding to a strap, the crowd being immense. She looks very weary, but succeeded in getting her glasses. (T.S.R. 44. 2 P.M. 78. S.S. 65.)

May 19. Saturday. Our S. School had their picnic at Tutheway's Grove, and were joined by those from Lodi's and all the country around.