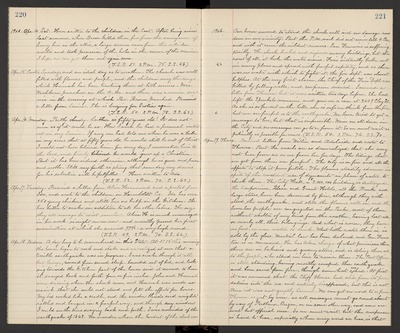 1906. Apr. 14. Sat. Have written to the children in the East. After being since last summer, when Bacon killed them, free from the annoyance of honey bees in the attic, a large swarm came from the outside world and took possession of the holes in the corner of the cornice. I hope we can get them out again soon. (T.S.R. 51. 2 P.M. 75. S.S. 68.)

Apr. 15. Easter Sunday, and an ideal day as to weather. The church was well filled with flowers and people, and the children sang the songs which Hannah has been teaching them at both services. Mrs. Washburn preached in the A.M. and there was a union service in the evening at which Rev. Brown preached. Received a letter from Eunice. She is longing for Scotia again. (T.S.R. 50. 2 P.M. 78. S.S. 62.)

Apr. 16. Monday. Partly cloudy. Luther is fifty years old! It does not seem as if it could be so. How I wish he had a personal interest in my Savior. If any one had told me when he was a babe in my arms that at fifty years old he would still be out of Christ I would not have believe him, for every day I consecrated him to the Lord, and firmly believed he would grow up a Christian. But it has been ordered, otherwise, although he is good and pure and noble. Still my faith is strong that someday my desires for his salvation will be fulfilled. Have written to Ada. (T.S.R. 52. 2 P.M. 72. S.S. 62.)

Apr. 17. Tuesday. Received a letter from Alice Hammond and a postal from Ida, and wrote to the children in Humboldt Co. Ida has over 250 young chickens and still has no help in the kitchen. She has butter to make in addition to all her other Labors. She says they all manage to exist somehow. Alice H. is much encouraged in her work - is might nurse now - and recently passed her first examination at which she received 99% - a very high record. (T.S.R. 49. 2 P.M. 70. S.S. 64.)

Apr. 18. Wednes. A day long to be remembered in this State. At 5:16 this morning the house began to rock and shake and we realized at once that a terrible earthquake was in progress. I was awake through it all but George, roused from sound sleep, bounded out of bed, and looking towards the kitchen part of the house said it seemed to him it swayed back and forth four or five inches. John and Hannah were dressing when the shock came and Hannah was made so seasick that she could not stand and felt the effects for hours. My bed rocked like a cradle, and the window blinds and weights rattled and banged in a fearful way, and through my window I could see the trees swaying back and forth. I was reminded of the earthquake of 1898. We wonder where the hardest of the shock was.

1906. Our house seemed to stand the shock well and no damage was done in our vicinity. But the P.M. mail did not arrive till 4 P.M. and with it came the wildest rumors. San Francisco is suffering terribly. The shock leveled and injured many buildings, but the worst of all, it broke the water mains. Fires instantly broke out in many places and spread with fearful rapidity, and as there was no water with which to fight it, the fire dept. was almost helpless. At the very first alarm, the Chief of the Fire Dept. was killed by falling walls, and confusion ensued. I received a letter from Theresa but it was written two days before. She had left the Speckels mansion and gone on a case at 2649 Clay St. As she is so far out on the hills, she is safe we think from the fire but we are fearful as to the earthquake. We have tried to get a message to her, but that is impossible. Wires are all down in the City and no messages can go to or from it. So we must wait as patiently as possible for news. (T.S.R. 50. 2 P.M. 76. S.S. 70.

Apr. 19. Thurs. Received letters from Willie and Adelaide and wrote to Theresa. But the mails are so demoralized that she may not hear from us or we from her for days. The tidings that we get from there are fearful. The city is on fire and all the efforts to stop it prove fictile. The flames steadily advance in spite of the constant use of dynamite in place of water to check them. The City Hall, a $3,000,000 building is destroyed, the Emporium, Palace and Grant Hotels, all the Banks and large stores, have been devoured by fire, although they with - stood the earthquake, and still the flames roll over, and the homeless people are congregated in the Parks, most of them without shelter of any kind from the weather, having lost all or nearly all, their belongings. And what is worse, they have no food, or even water to drink. What little water there is, is sold by the glass. Martial law has been declared and Gen. Funston is in command. He has taken charge of what provisions there there are in bakeries and grocery stores, and is clothing them out to the people, who stand in line to receive them. The Post Office is still standing, having mostly escaped the earthquake and been saved from fire, though somewhat [?] sched. At first it was rumored that the Cliff House had slid from its foundations into the sea and entirely disappeared, but this is not true it was not greatly harmed. We can get no word to or from Theresa as yet by wire, as all messages must go round about by way of Portland. Oregon, or in some other way, and none are sent but official ones. So we must wait, but the suspense is hard to bear, especially when every word we hear, is that