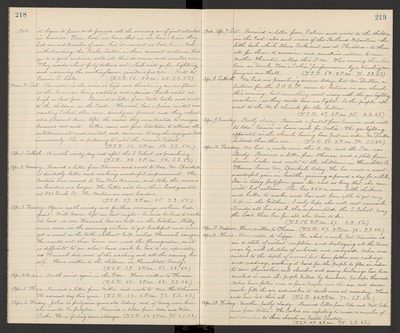 1906. it began to pour and poured all the evening as if just started in business. From Lodi we hear that in one hour's time they had one and 1/4 inches of rain, but it was not so bad here. Not withstanding, the "Peake Sisters," in their ancient costume, had quite a good audience, sold all their ice cream and wanted more They made about forty dollars net, which will go for lighting and warming the meeting house, janitor's fees, x.c. Wrote to Eunice C. Locke. (T.S.R. 58. 2 P.M. 65. S.S. 55.)

Mar. 31. Sat. The water in the river is high and threatening an over flow so the levers an being watched and repaired. Back water as high as last Jan. Received a letter from Will Cooke and wrote to the children in the East. Hannah had a piano recital and counting Celeste, there were twentyone present and they reported a pleasant time. After the music they were treated to oranges, bananas and nuts. Lottie came out from Stockton to attend the entertainment and recital, and came in to say she enjoyed both immensely. She is preparing to enter the normal School. (T.S.R. 51. 2 P.M. 58. S.S. 54.)

Apr. 2. Monday. Received a letter from Theresa and wrote to Ada. Mr. Spreckels is decidedly better and making wonderful improvement. The Nortons have moved to Van Ness Avenue, and take the nurses as boarders no longer. The latter will have their headquarters at 836 Yurk St. The Nortons are now boarders. (T.S.R. 37. 2 P.M. 65. S.S. 55.)

Apr. 3. Tuesday. Again north windy and for three mornings we have had frost. Will Moore left us last night - he said he had to work too hard - so now Hannah has no help in the kitchen. Billy never came in the morning in time to get breakfast and never got a meal on the table without help unless Hannah was gone. He would not clean house nor weed the flower garden, so it is difficult to see what hard work he had to do, especially as Hannah did most of the washing and all the ironing herself. Have written to the children in Humboldt County. (T.S.R. 39. 2 P.M. 67. S.S. 60.)

1906. Apr. 7. Sat. Received a letter from Calvin and wrote to the children in the East also sent views of the Portland Exposition the little book which Alma Cooke sent me at Christmas to them all for them to examine and sometime return to me. Mother Hunter called this P.M. This evening there has been an "Uncle Tom's Cabin" performance by a traveling company in our Hall. (T.S.R. 50. 2 P.M. 71. S.S. 63.)

Apr. 8. Sabbath. We had no preaching service today, but Mr. Dutton, a lecturer for the I.O.G.T. came to lecture in our church this evening, but something went wrong with the gas lightning machine, so they could have no lights. So the people all went to the M.E. church for the lecture. (T.S.R. 47. 2 P.M. 75. S.S. 65.)

Apr. 9. Monday. Partly cloudy. Received a postal from Eunice and wrote to Ada. Eunice is home-sick for Scotia. The gas lighting apparatus in the church having been put in order, Mr. Dutton lectured there this eve. (T.S.R. 51. 2 P.M. 70. S.S. 64.)

Apr. 10. Tuesday. We had a mild rain this A.M. and the P.M. was cloudy. Received a letter from Theresa and a photo from Louise Locke and wrote to the children in Humboldt Co. Theresa leaves Mr. Spreckels today. He has made a most wonderful gain in health, gaining a pound a day for while. Ida is today fortyfour years old, and so busy that she can write but seldom. She has 250 or more little chickens and butter to make, and has not been able to get any help in the kitchen. I only hope she will not over work. Besides all her work, she superintends the S. School. May the Lord bless her for all she tries to do. (T.S. 55. 2 P.M. 67. S.S. 56.)

Apr. 12. Thurs. Have written to Lizzie. For about a week, Mt. [?] is in a state of violent eruption and destroying all the towns near by, with stretches of orchards and vineyards. Ashes and cinders to the depth of several feet have fallen over railways and roadways, making it hard for the people to flee in order to save themselves, and churches and many buildings have been crushed in and the people killed by hundreds, perhaps thousands. Ashes have fallen even as far as Naples and the sea, and dense smoke fills the air and makes it dark even at monday. Thousands have lost their all. (T.S.R. 46. 2 P.M. 72. S.S. 66.)

Apr. 13. Friday. Weather partly cloudy. Received letters from Ada and Will Cooke and from Willie. The Cookes are expecting to receive a number of new members to their church on Easter Sunday. (T.S.R. 49. 2 P.M. 75. S.S. 67.)