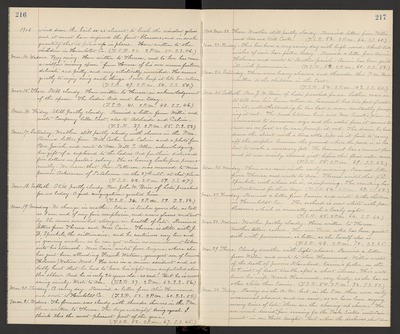 Mar. 14. Wednes. Very rainy. Have written to Theresa, and to her has come a willow "mixing spoon" from Horace of his own manufacture, delicate and pretty, and very artistically inscribed. He seems greatly to enjoy doing such things, I will keep it till her return. (T.S.R. 47. 2 P.M. 50. S.S. 50.)

Mar. 17. Saturday. Weather still partly cloudy with showers in the P.M. Received letters from Will Cooke and Calvin and a photo from Bro. Josiah, and wrote to Mrs. Will S. Allen. Acknowledging her gift of a cupboard to the Ladies Aid for their dishes and five dollars on pastor's salary. She is leaving Lockeford permanently. We learn that Rev. Patterson was married to miss Jennie Ackerman of Petaluma on the 27th ult. at that place. (T.S.R. 42. 2 P.M. 59. S.S. 47.)

Mar. 19. Monday. No change in weather. Edna is twelve years old, as tall as I am, and of very fair complexion, and wears glasses constantly. She seems somewhat stronger in health of late. Received letters from Theresa and Miss Cain. Theresa is still with J.D. Spreckels, the millionaire, and he continues very low and is growing weaker, as he can yet retain no nourishment taken into his stomach. Miss Cain writes from Arizona, where she has just been attending Frank Watson, youngest son of Emma (Holman) Watson-Wood. He was in a mine accident and so badly hurt that he had to have his right arm amputated above the elbow. And he is only 24 years old - so sad! But he is recovering nicely. Wrote to Ada. (T.S.R. 37. 2 P.M. 63. S.S. 56.)

Mar. 23. Friday. This has been a very rainy day with high wind. About two inches of rain have fallen today. Received a letter from Annie Holman and wrote to Brother Josiah. Annie has been quite ill with pneumonia. (T.S.R. 54. 2 P.M. 60. S.S. 58.)

Mar. 25. Sabbath. Rev. J.W. Brier of Lodi preached for us. Luther came in to tell me his house cellar or basement has two feet of water in it, notwithstanding he has had a man constantly pumping it out. The pond between him and Mrs. Grant's place is increased to immense size and the water from it seems to run in as fast as he can pump it out. The drain he had down the street with a terra cotta pipe in it fails to carry off the surplus because the ground where the pond is, is too low to make a necessary fall. The basement has a cement floor and it was nicely cleaned just before this flood water came. (T.S.R. 55. 2 P.M. 69. S.S. 63.)

Mar. 29. Thurs. Cloudy weather with light showers. Received a letter from Willie and wrote to Alice Hammond. Willie writes of the death of Junin's Blanchard, Eunice's father, on the 21st inst. of heart trouble, after a short illness. This will leave his wife, Maria Hammond, Very lonely, as she has no other child than Eunice. (T.S.R. 54. 2 P.M. 72. S.S. 57.)

Mar. 30. Friday. Rainy in the A.M. but in the P.M. there were only occasional showers, and we said, as we have been saying many times of late, "these are the clearing-up showers." For we much desired a fair evening for the "Peake Sisters" entertainment in our Hall tonight. But when the darkness shut down