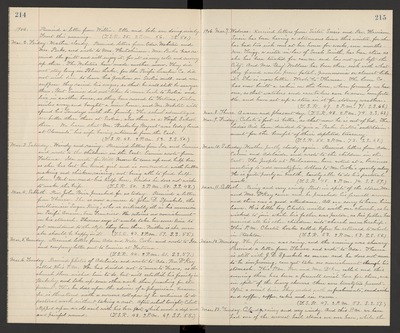 Mar. 2. Friday. Weather cloudy. Received letters from Edw. Webster and Mrs. Perks, and wrote to Mrs. Hutchinson. Mrs. Perks has received the guilt and will enjoy it, for it is very cold and snowy up there. The Webster have made another move, They did not stay long in Blue Lake, for the Pacific Lumber Co. did not wish him to leave his position in Scotia mill, and we suppose they raised his wages, so that he will still be sawyer there. But Eunice did not like to move back to Scotia and live in another house, as they have moved to Fortuna, twelve miles away, and bought a nice home, and Mr. Webster will spend his Sundays with the family. The school advantages are better there than at Scotia, also there is a High School there. We learn that Mr. Berkeley Bryant was today buried at Clements his wife having returned from the East. (T.S.R. 43. 2 P.M. 53. S.S. 50.)

Mar. 3. Saturday. Windy and rainy. Received letters from Ida and Eunice and wrote to the children in the East. Eunice wrote from Fortuna. Ida wrote for Will Moore to come up and help her as she has lost her hired girl and is over crowded with butter making and chicken raising, not being able to find help there. But are need his help here, besides he does not wish to make the trip. (T.S.R. 50. 2 P.M. 50. S.S. 48.)

Mar. 4. Sabbath. Rev. John Brier preached for us today. Received a letter from Theresa. She is now a nurse to John D. Spreckels, the millionaire "Sugar King," Who is critically ill in his mansion on Pacific Avenue, San Francisco. He retains no nourishment on his stomach. Theresa says it would take her some time to get accustomed to the style they have there. Neither is she sure she should be happy in it. (T.S.R. 43. 2 P.M. 59. S.S. 55.)

Mar. 6. Tuesday. Received photos of Adelaide and wrote to Ada. Rev. DeKay called this P.M. He has decided not to move to Fresno, as the church there wished him to do, but will establish his family in Berkeley and take up some other work than preaching for the present. This he does upon the advice of a physician, because he is threatened with a nervous collapse if he continues to do pastoral work without taking a rest. After school tonight, Celeste stepped upon an old nail with his bare foot, which made a deep and and painful wound. (T.S.R. 48. 2 P.M. 69. S.S. 55.)

1906. Mar. 7. Wednes. Received letters from Sister Susie and Rev. Harrison. Susie has been having a strenuous time this winter, for she has had two sick ones at her house for weeks, even months. Mrs. Trigg, a sister-in-law of Sarah Smith, has been there as she has been treated for cancer and has not yet left the City. And Mrs. Benj. Wallace has been there sick with what they feared would prove fatal, pneumonia or almost like it. She is now better. Wrote to Theresa. The Lever Co. has now built a cabin on the lever, where formerly we had one, so that watchers and care takers can be more comfortable, and have set up a stove in it for stormy weather. (T.S.R. 47. 2 P.M. 71. S.S. 66.)

Mar. 10. Saturday. Weather partly cloudy again. Received letters from Ada, Calvin and Adelaide, and wrote to the children in the East. The people at Steilacoom have voted at a business meeting to add seventy five dollars to Mr. Cooke's yearly salary. He is quite poorly in health, hardly able to do his pastoral work. (T.S.R. 48. 2 P.M. 74. S.S. 59.)

Mar. 11. Sabbath. Rainy and very windy. But in spite of the storm Mr. and Mrs. DeKay come and he preached his farewell sermon and there was a good attendance. all are sorry to have him leave. His little boy Chester united with our church, as he wished to join while his father was pastor, as his father has received all his other children into church membership. This P.M. Chester Locke called before he returned to school in Stockton. (T.S.R. 53. 2 P.M. 53. S.S. 56.)

Mar. 12. Monday. The forenoon was rainy, and the evening was showery. Received a letter from Theresa and wrote to Ada. Theresa is still with J.D. Spreckels as nurse and he does not seem to be improving, can yet take no nourishment though his stomach. This P.M. Rev. and Mrs. DeKay called and this evening there has been a farewell social here for them, and in spite of the heavy showers there were twenty two present. After a social time they ended with refreshments, sandwiches and coffee, coffee, cakes and ice cream. (T.S.R. 47. 2 P.M. 53. S.S. 57.)

Mar. 13. Tuesday. Cloudy, rainy and very windy. And this P.M. we have had one of the severest hail storms we ever have, while the