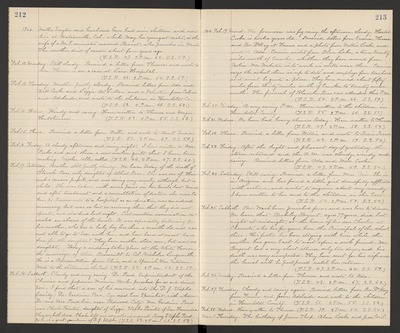 Feb. 13. Tuesday. Weather partly cloudy. Received letters from Ada and Will Cooke and Lizzie McLellan and a Valentine from Calvin and Adelaide, and wrote to the children in Humboldt Co. (T.S.R. 53. 2 P.M. 68. S.S. 62.)

Feb. 17. Saturday. Weather still partly cloudy. We learn today of the death of Blanche Ross, only daughter of Albert Ross. She was one of Hannah's music pupils, and was doing very nicely, although but a child. She was taken with severe pains in her bowels last Mond. and after treatment and a consultation of doctors, she was taken to Sacramento to a hospital as an operation was considered necessary, but was so low on arriving there that they did not operate, and she died last night. Post-mortem examination revealed an abscess of the bowels. It was especially distressing for her mother, who has a baby boy less than a month old, and was not able to go to see with her, and how hard it must have been for the daughter! They have another older son, but now no daughter. Today a wedding takes place at the White House, the marriage of Alice Roosevelt to Col. Nicholas Longworth. He is a Representative from Ohio, and a Spanish War Veteran. Wrote to the children in the East. (T.S.R. 53. 2 P.M. 68. S.S. 58.)

Feb. 18. Sabbath. Cloudy and very rainy. Dr. Pond, Superintendent of the Chinese and Japanese mission work, preached for us and dined here. I find that a son of his married into the D.J. Staples family. Dr. Gardiner Pond, Eye and Ear Specialist, with whom Dr. and Mrs. Pond live, near Redwood City. Mrs Gardiner Pond was Phoebe Painter, daughter of Lizzie Staples Painter if San Francisco. They are both dead. Phoebe left one son, who is named Perry Staples Pond. So he is a great grandson of D.J. Staples. (T.S.R. 53. 2 P.M. 61. S.S. 58.)

1906. Feb. 19. Mond. The forenoon was fog rainy, the afternoon cloudy. Hester Cooke is twelve years old. Received letters from Eunice, Theresa and Rev. DeKay at Fresno, and a photo from Nellie Locke, and wrote to Ada. Eunice writes from Blue Lake, a town twenty miles north of Eureka, whither they have moved from Scotia. Mr. Webster is to work in mills near there. Eunice says the school there is "up to date" and employs four teachers so it must be quite a place. They have moved about fifty miles, from thirty miles south of Eureka to twenty miles north. The funeral of Blanche Ross attended this P.M. (T.S.R. 50. 2 P.M. 66. S.S. 59.)

Feb. 24. Saturday. Still rainy. Received a letter from Miss Cain. She is in Arizona and has found a little girl dreadfully afflicted with asthma, and writes to inquire about my remedy. I have written to her and to the children in the East. (T.S.R. 52. 2 P.M. 53. S.S. 52.)

Feb. 25. Sabbath. Rev. Washburn preached for us and was here to dinner We learn that Berkeley Bryant aged 77 years, died last night at midnight, at the home of his son Charles at Clements, who has for years been the Principal of the school there. His father has been staying with him while the mother has gone East to wait upon a sick friend. Mr. Bryant had a very short illness, only two days, and his death was very unexpected. They have sent for his wife and the burial will be postponed until her return. (T.S.R. 47. 2 P.M. 64. S.S. 59.)