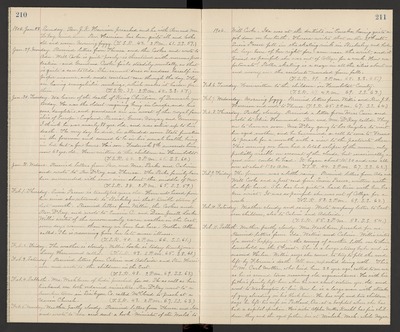 Jan. 29. Monday. Received letters from Theresa and the Cookes and wrote to Ada. Will Cooke is quite poorly - is threatened with nervous prostration - and grandma Cooke fails steadily mentally, so that is quite a care to Ada. She cannot dress or undress herself in proper manner, and needs constant care through the day. They are having evangelistic meetings, which makes it harder for them. (T.S.R. 37. 2 P.M. 62. S.S. 59.)

Jan. 30. Tuesday. We learn of the death of King Christian of Denmark yesterday. He was the oldest reigning king in Europe and his sons, daughter, and grandsons are in most of the royal families of Europe - England, Russia, Greece, Norway and Germany. I think he was nearly 88 yrs. old, and was active up to his death. The very day he died, he attended some state function in the forenoon and seemed to be in his usual health, being in bed but a few hours. His son, Frederick 8th succeeds him now 63 yrs. old. Have written to the children in Humboldt. (T.S.R. 42. 2 P.M. 65. S.S. 60.)

Feb. 1. Thursday. Susie Pascoe in twentytwo years old. Have not heard from her since she returned to Berkeley in that terrible storm of last month. Received letters from Willie, the Cookes and Rev. DeKay, and wrote to Eunice C. and Dean Jewett Locke. Willie writes of the uncommonly warm weather in the East, Some days warmer than any we have had here. Mother Allen called. She is recovering from her late severe illness. (T.S.R. 40. 2 P.M. 66. S.S. 61.)

Feb. 5. Monday. Weather partly cloudy. Received letters from theresa and Ida and wrote to Ada and sent a book - "minister of the World" to

1906. Will Cooke - Ida was at the dentists in Eureka, having quite a job done on her teeth. Theresa writes that on the 29th [?]. Susie Pascoe fell in the skating sink in Berkeley and broke the large bone of her right fore-arm near the wrist and it proved so painful she was out of College for a week. How unfortunate! Roller skating is a eraze in all the cities about us and many are the accidents recorded from falls. (T.S.R. 49. 2 P.M. 68. S.S. 65.)

Feb. 8. Thursday. Partly cloudy. Received a letter from miss Cain and wrote to Alice Hammond. Rev. and Mrs. DeKay called. They are to leave as soon, Mrs. DeKay going to Los Angeles to visit her aged mother, and he has received a call to come to [?] to preach for a month with a view to the pastorate there. This evening we have had a total eclipse of the moon, only partially visible on account of the clouds, but occasionally a good view could be had. It began about 10:30 and was all over at about 1:30 a.m. (T.S.R. 44. 2 P.M. 67. S.S. 62.)

Feb. 9. Friday. The forenoon was a little rainy. Received letters from Ada and Will Cooke and a post card from Sussie Pascoe, written with her left hand. She has had quite a hard time with her broken wrist. It was so painful she was out of College for a week. (T.S.R. 53. 2 P.M. 69. S.S. 62.)

Feb. 11. Sabbath. Weather partly cloudy. Mrs. Washburn preached for us. Received letters from Ida, Willie and Calvin. Willie writes of a most happy event - the coming of another little one to their household on the 5th inst. She is a large strong babe and is named Helen. Willie says she comes to try to fill the void left by Florence's death. All are reported doing well. This P.M. Carl Molter, who lived here 22 yrs. ago, called to see us as he is around town renewing old acquaintances. He with his father's family left here when he was about sixteen yrs. old and went to Washington to live. Now he is a large man with streaks of grey alreading in his black hair. He has wife and two children says he left his wife in Portland, Ore. at a hospital where she has had a capital operation. His sister Alpha Molter Kuchl has five children, they and the aged father live at Winlock, Wash. while Myra