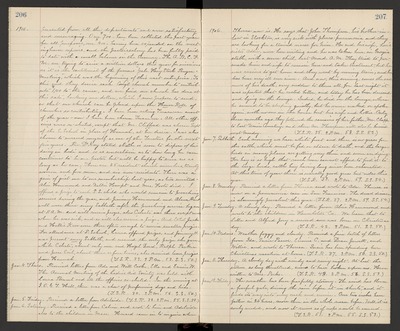 1906. presented from all the departments and were satisfactory and encouraging. Over $700. have been collected the past year for all purposes, our $400. having been expanded on the meeting house repairs, and the pastor's salary has been fully paid to date with a small balance in the treasury. The A.B.C.F.M. are trying to raise a million dollars this year for missions as it is the centennial of the famous "Yale Hay Stack Prayer. Meeting," which was the beginning of this vast enterprise. To this end they desire each Cong'l church member to contribute $1.40 to the cause, and we find our church has done at this rate, lacking on dollar, which I now propose to send, so that our church can be placed upon the Honor Roll of churches so contributing. I have been acting Treasurer most of the year - now I have been chosen Treasurer. All others officers were re-elected, except that Mr. Clifford was chosen Supt. of the S. School in place of Hannah, at her desire. I was also chosen to succeed myself as one of the Trustees for the next five years. Rev. DeKay stated that he is soon to dispose of his dairy in Lodi and so is uncertain as to how long he can continue to be our pastor but will be happy to serve us as long as he can. There are 25 resident church members, twenty women and five men, and six non-residents. There was a gain of just one to our membership last year, as two united. Alice Hammond and Nellie Haupt and Mrs. Foote died. I offered a prize to each S.S. child who would remain to preaching services during the year, and Jimmy Hammond and Alma Hart well were there every Sabbath after the preaching service began at 11 A.M. and will receive prizes, also Celeste was there except once when he was sick, and so will also receive a prize. And Ethel Jacks and Hattie Kerr were there often enough to receive smaller prizes. For attendance at S. School, Laura offered prizes, and Jimmy H. was present every Sabbath, and received the only prize she gave, while Celeste, absent only once and Hazel Dowd, Ralph Parker and Jesse Coil, absent three or four times, also received lesser prizes from Hannah. (T.S.R. 33. 2 P.M. 53. S.S. 50.)

Jan. 4. Thurs. Received letters from Ada and Will Cooke, Etta and Eunice W. The Annual Meeting of the Ladies Aid Society was held with Laura Bruml and all the officers re-elected. In the evening at I.O.G.T. Hall, there was a show of performing dogs and birds. (T.S.R. 30. 2 P.M. 56. S.S. 50.)

Jan. 6. Saturday. Received a letter from Calvin and wrote to him and Adelaide also to the children in Mass. Howard came in to inquire where

1906. Theresa now is. He says that John Thompson, his brother-in-law in Stockton, is very sick with pleura-pneumonia and they are looking for a trained nurse for him. He and his wife, Lou's sister Addie, were here visiting and he was taken here, in George's stable, with a severe chill, last Mond. A.M. They tried to persuade him and wife to remain here and take treatment, but he was anxious to get home and they went by evening train, and he has been very ill ever since. And now, this evening, comes the sad news of his death, very sudden to them all, for last night it was reported that he rested better, and today he has been dressed and lying on the lounge. Indeed, he died on the lounge, where he seemed to be sleeping quietly, but he never waked or spoke again, with no one in the house but his wife and Lottie. Only three months ago, they followed the remains of her father, Mr. Clapp to East Union Cemetery, and there Mr. Thompson will also be buried next Monday. (T.S.R. 35. 2 P.M. 58. S.S. 52.)

Jan. 7. Sabbath. Each morning we have white frost and there is no grass for the cattle, which must be fed or starve to death, and the large herds in many places are getting very thin and some are dying. For hay is so high that ranch men cannot afford to feed it to the large herds, cattle hay having long since been exhausted. At this time of year there is usually good grass but not so this year. (T.S.R. 33. 2 P.M. 59. S.S. 54.)

Jan. 10. Wednes. Weather foggy and cloudy. Received a fine batch and letters from Ida, Susie Pascoe, Eunice C. and Dean Jewett, and Willie, and wrote to Theresa. Susie has been spending her Christmas vacation at home. (T.S.R. 37. 2 P.M. 50. S.S. 50.)

Jan. 12. Friday. The weather has been fearfully stormy. The wind has blown a fearful gale, driving the rain before it in sheets, and it finds its way into every crack and crevice. Over two inches have fallen in 24 hours, more than in the whole season before. Well, it is sorely needed, and now it seems as if crops would be assured. (T.S.R. 51. 2 P.M. 55. S.S. 53.)