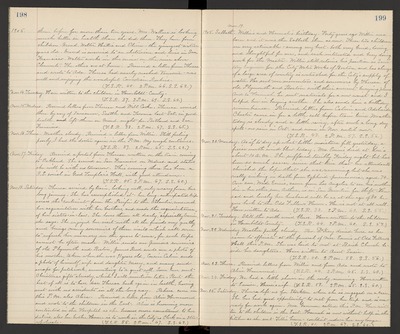 1905. them before for more than ten years. Mrs. Wallace is looking much better in health than she did then. They have four children - Mand, Walter, Hattie and Oliver - the youngest sixteen years old. Mand is married to an electrician and lives in San Francisco. Walter works in the mine on the river above Clements. The others are at home. Received a letter from Theresa and wrote to Ada. Theresa had nearly reached Vancouver - was well and enjoying the wonderful Canadian Rockies. (T.S.R. 40. 2 P.M. 66. S.S. 62.)

Nov. 15. Wednes. Received letters from Theresa and Will Cooke. Theresa arrived there by way of Vancouver, Seattle and Tacoma last Sat. in good health, and left them on Mond. night for Portland and San Francisco. (T.S.R. 38. 2 P.M. 67. S.S. 65.)

Nov. 17. Friday. Received a postal from Theresa written on the train coming to Oakland. She arrived in San Francisco on Wednes. and states she will be with us tomorrow. This evening there has been a S.S. social in Good Templar's Hall, with good attendance. (T.S.R. 45. 2 P.M. 67. S.S. 60.)

Nov. 18. Saturday. Theresa arrived by train, looking well, only weary from her long journey. She has accomplished it - her long - anticipated trip across the continent from the Pacific to the Atlantic, renewed her acquaintance with her brothers, and made the acquaintance of her sisters-in-law. She loves them all dearly, "especially Eunice", she says. She enjoyed her visit with all the friends very greatly and brings many souvenirs of these visits which will serve to refresh her memory in the years to come, for such trips cannot be often made. Willie sends me precious souvenirs of old Plymouth and Boston, James Reed sends one a photo of his mother, taken when she was 91 years old, Cousin Calvin sends a photo of himself, wife and daughter Mary, and many send scraps for patchwork, amounting to a great roll. Some have sent Christmas gifts already, which I will mention later. But the best of all is to have dear Theresa back again in health, having met with no accidents in all the long way. Rebecca came in this P.M. also Alice. Received a letter from Alice Hammond and wrote to the children in the East. Alice is becoming more contented in the Hospital as she becomes more accustomed to her duties, also her brother Horace is to work in the City as Clerk in a Store. wholesale. (T.S.R. 55. 2 P.M. 67. S.S. 63.)

1905. Nov. 19. Sabbath. Willie's and Hannah's birthday. Forty years ago Willie was born and it was the Sabbath then as now. These two children are very estimable - among my best - both very kind, loving and thoughtful for me, and each interested and busy doing work for the Master. Willie still retains his position as Sanitary Engineer for the City Water Works of Boston, and has charge of a large area of country as watershed for the City's supply of water. He sent me mementoes and souvenirs by Theresa of old Plymouth and Boston with their ancient burying places. And to Hannah he sent materials for a new waist and I helped her in buying another. She also sends him a birthday remembrance. Received letters from Calvin and Adelaide Chester came in for a little call before train time. Weather today is cloudy and a little rainy, after such a long dry spell - no rain in Oct. and none in Nov. until now. (T.S.R. 43. 2 P.M. 57. S.S. 56.)

Nov. 20. Monday. As if to dry up what little moisture fell yesterday, a fierce north wind blew today. Mrs. Ennis died at Lou's about 10 A.M. She suffered terribly Friday night but has been so much easier since that time that her attendants cherished the hope that she was recovering, but she was really sinking in death from typhoid - pneumonia, ages 74. One son, Wade Ennis, came from Los Angeles to see his mother die - her other son, Arthur, is in San Queentin for theft. How sad and lovely her husband will be as, at the age of 80 he goes back to the Odd Fellows' Home. He is not at all well. Have written to Ada. (T.S.R. 38. 2 P.M. 60. S.S. 55.)

Nov. 22. Wednesday. Weather partly cloudy. Rev. DeKay dined here as he came to officiate at the funeral of Mrs. Ennis at Odd Fellows Hall this P.M. She was laid to rest and Brick Church beside her daughters. Have written to Aunt Susie. (T.S.R. 40. 2 P.M. 58. S.S. 56.)

Nov. 25. Saturday. Theresa left us for Stockton where she is engaged on a case. She has had good opportunity to rest from her trip and is now ready for work again. Mrs. Gammon called this P.M. Have written to the children in the East. Hannah is now without help in the kitchen as she sent Tillie home - couldn't endure her any longer. (T.S.R. 41. 2 P.M. 67. S.S. 60.)