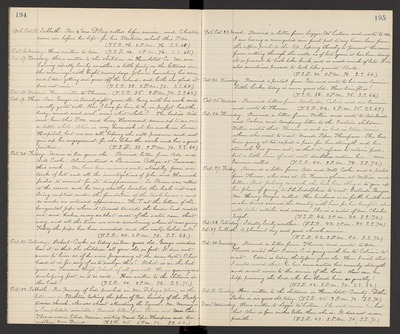 Oct. 17. Tuesday. Have written to the children in Humboldt Co. We are having ideally lovely weather, a little frosty on the bottoms in the mornings, with bright, sunny days. John is harvesting his corn and Eddie getting sod grass off the island, and both are glad it does not rain. (T.S.R. 38. 2 P.M. 72. S.S. 64.)

Oct. 19. Thurs. Our George is twenty eight years old, busy with his work and usually quite well. How I long for him to be in perfect health, body, mind and soul, "every whit whole!" The Ladies Aid met here this P.M. and Lucy Hammond came up to see me a little while. Alice is very home sick at her work in Lane Hospital, but we are all hoping she will persevere and not give up her engagement, for she likes the work and has a good position. (T.S.R. 38. 2 P.M. 70. S.S. 60.)

Oct. 20. Friday. Marie is ten years old. Received letter from Ada and Will Cooke. Alma entered a Business College at Tacoma this week. We have been missing water steadily from our tanks of late and all the investigations of John and Hannah failed to account for its disappearance. So Bacon was called to the reserve and be very shortly located the leak - it was being emptied under the foundation of the tank house - and so made no outward appearance. The T at the bottom of the horizontal pipe where it turned towards the house had rusted out and broken away so that most of the water ran that way, and all the time we were wondering where it was going. Today the pipe has been mended and the water baled out. (T.S.R. 40. 2 P.M. 78. S.S. 68.)

Oct. 21. Saturday. Robert Cooke is today sixteen years old. George wonders how it is that the children all grow old so fast. It does not sum to him as if he were progressing at the same rate. O how hard it is for any of us to realize this! Robert is in the last year in Tacoma High School, if all goes well. He is growing and developing fast, so it is said. Have written to the children in the East. (T.S.R. 40. 2 P.M. 78. S.S. 71.)

Oct. 22. Sabbath. Rev. Murray of Lodi preached in Mr. DeKay's place, as the latter was in Stockton taking the place of Rev. Lundy of the Presbyterian church, who was absent attending the Synod. Mr. Murray is a Campbellite minister. Received letters from Theresa and Miss Cain. Theresa was in Etna, Maine, visiting Mand Piper Thompson and her mother, Mrs. Friend. (T.S.R. 45. 2 P.M. 72. S.S. 64.)

1905. Oct. 23. Mond. Received a letter from Lizzie McLellan and wrote to Ada I am having a corrugated iron front put to my house here from the upper porch to the top, hoping thereby to prevent the rains' from wetting through the walls, as of late years it has been doing. It is pressed to look like brick, and is used much of late. It is also sometimes pressed to look like granite blocks. (T.S.R. 40. 2 P.M. 78. S.S. 64.)

Oct. 26. Thursday. Received a letters from Willie and wrote to Adelaide and Calvin and Company letter to the Eastern children. Willie writes that Theresa is sick in bed in Etna, Maine, where she went to visit Maude Piper Thompson. She has been going at too rapid a pace for her strength and her stomach has given out, so that it refuses to retain food, but a little time of rest will doubtless restore her. Mrs. Gammon called. (T.S.R. 40. 2 P.M. 78. S.S. 72.)

Oct. 27. Friday. Received a letter from Ada and Will Cooke and a posted from Theresa, who was at So. Framingham at Willie's, and better. But feeling so weak, she had been obliged to give up her plan on going to Philadelphia to visit Gertrude Burgeas. Mrs. Henry Magee called. Her husband is in feeble health and as she drives around the country with him for his benefit, she sells toilet articles and essences. She is a sister of Mrs. Charles Siegel. (T.S.R. 46. 2 P.M. 80. S.S. 74.)

Oct. 30. Monday. Received a letter from Theresa and wrote to Ada. Theresa writes that Eunice C. is going with her to Calvin's to visit. Eddie is today thirty four years old. How I wish that I could record that he has consecrated his manly strength and sweet voice to the service of the Lord. How can he help praising the Lord who has blessed him so greatly! (T.S.R. 42. 2 P.M. 70. S.S. 62.)